Last week I wrote about Ukrainian fandom as impacted by the separation of the Ukraine from the Soviet Union in 1991. This column I will write about the lighter side of fandom in Kiev, but first a final political note. 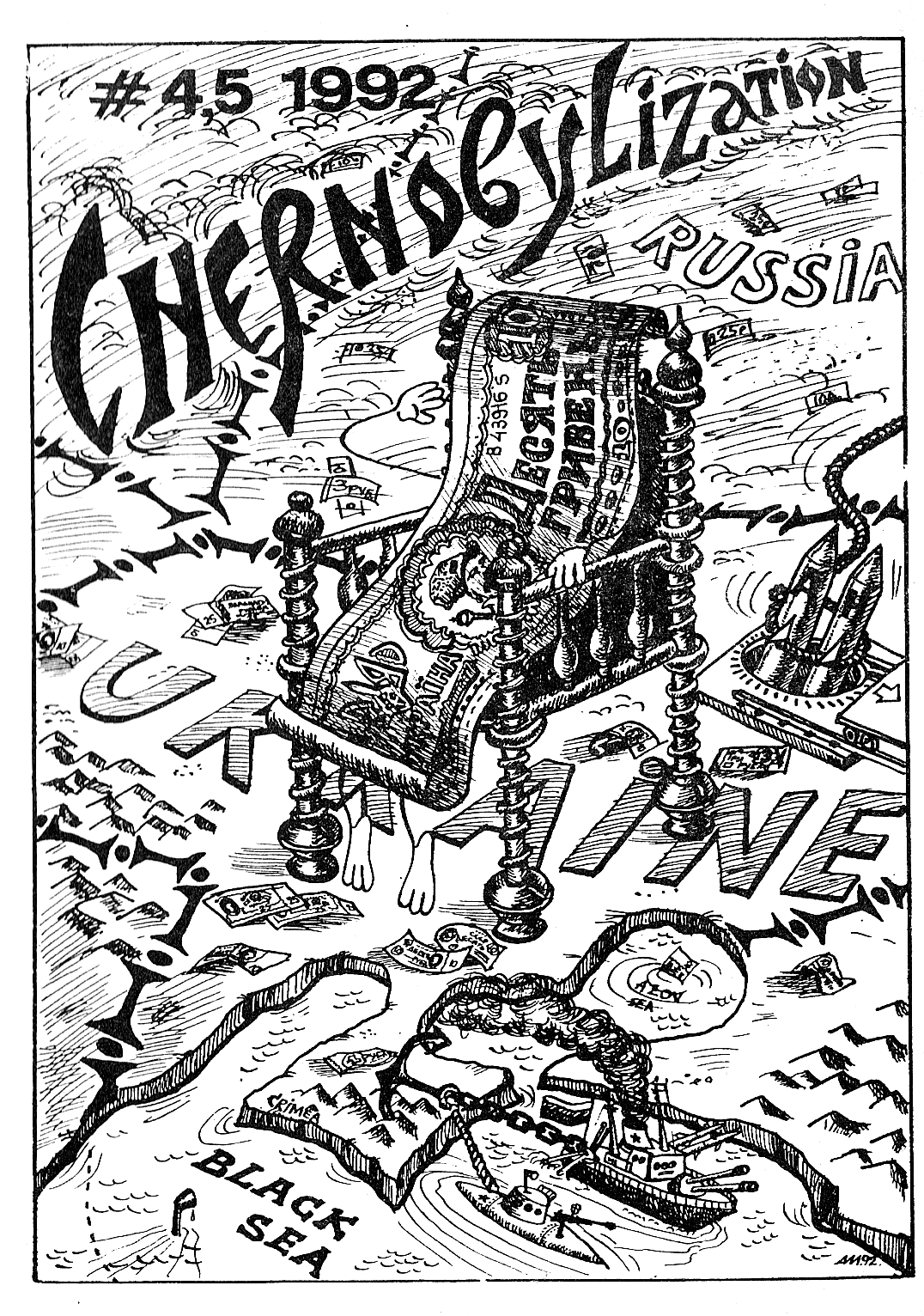 Observe the cover of CHERNOBYLIZATION #4/5. The enthroned importance of money and the depiction of much of it being spirited away by the wind toward Russia reflects Alexander Vasilkovsky’s editorial:

“Ukraine became completely independent… Certainly, as for the living standard, our lives became much worse and harder… But we’re proud that Ukraine is much more stable in political and military sense than almost all the other former Soviet Republics. Finally, look at this front cover and compare it with your [western] media. There’s everything in it that we told you above.”

More than what we are told, in fact. First, observe the Soviet warship (with Russian star) anchored to Crimea. It has a full head of steam and is vibrating in the water as it endeavours to drag Crimea away from the Ukraine. Twenty-two years later, the Russians finally succeeded in reclaiming it.

Second, note the tentacle reaching out from Russia to snatch away the nuclear warhead-tipped ICBMs from Ukrainian control. As part of the ‘deal’ between the Ukraine and the Soviet Union the Ukraine was awarded possession of all Soviet nuclear weapons and delivery systems based on Ukrainian soil. In short order both Russia and the United States pressured the Ukrainians into giving up their nuclear arsenal in the name of world peace, both superpowers offering ironclad guarantees that Ukrainian independence was secure forever. The cover was prescient in implying that giving up their nukes was in truth a bad idea. The Ukrainians were suckered. This is why you should never trust a superpower… ANY superpower…

However, the Zoryany Shlyah club was determined to enjoy themselves, reveling in SF, resolute in pursuing the fannish life.

For example, in 1991 and 1992 they hosted the CHUMATSKY SHLYAH convention at the Dniprovska Khvyla Recreation Base located on an island in the Dnieper River just North of Kiev. More than 100 fans attended the first con, including Yuri Semetsky, a bookseller from Moscow. Playing high stakes billiards with Boris Sidyuk, he won the Crimea back for Mother Russia. Then Boris Shtern won Crimea for the Ukraine. For the rest of the convention Yuri demanded the return of Crimea. No doubt all good fun and spirited hijinks, but again… prescient.

The first convention ran four days. Apparently the membership fee covered room costs and four meals a day in the base cafeteria. Heck of a deal. Programing was relaxed. At a writer’s party/panel on the beach the writers demanded beer, a motorboat with a bar, and the conversion of the beach into a nudist beach. All three wishes granted. Heck of a convention if you ask me. Indeed Boris Sidyuk commented:

Not a common complaint at most conventions these days, alas. Commenting on the second convention a year later Alexander V. Vasilkovsky wrote something of an explanation:

“Numerous parties were started in the rooms: natural result of a con without a bar – inevitable feature of a Soviet-style con, where every room is a bar…”

Other activities at the first convention included a 24 hour video room, filking, trips up and down the Dnieper on the afore mentioned party boat, picnics on the beach, fans vs. pros billiards, and the Chumatsky Shlyah Award banquet.

Turns out the award, voted on by Ukrainian fans and said to be the Ukrainian National SF award, goes to any Ukrainian work no matter whether published in Ukrainian or Russian languages. Just for the record (and bearing in mind the titles are translated), the winners are:

Incidentally, the actual award is a replica of a pagan idol pulled from the Dnieper where it had been discarded by newly converted Christians centuries earlier. It has four identical faces, one on each side of the block. 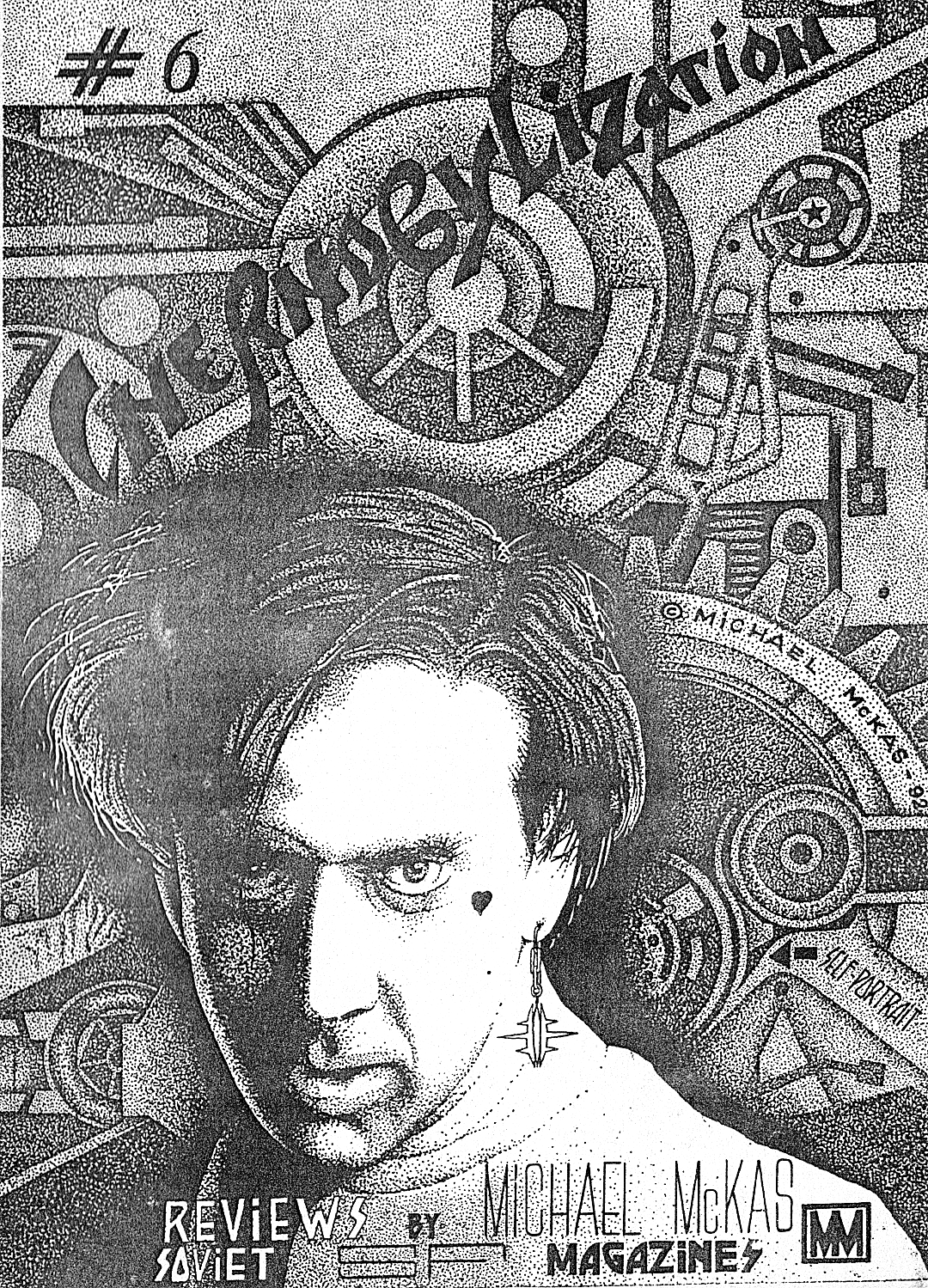 The 1992 convention even more successful than the first. As Alexander V. Vasilkovsky put it:

“…all big-name fans from Ukraine and a lot of those from Russia attended… foreign guests came from 8 countries: UK, Canada, Bulgaria, Russia, Moldava, Lithuania, Latvia, and Azerbaijan… It was no wonder to meet here a European fan, David Hodges from UK, but it was amazing to see a Canadian here, and Michael McKenny proved that there’s no borders and no distances for true fans. He may well be included into North American fandom’s book of records as the first North American fan ever to attend a convention in an ex-USSR country…”

Michael, then the editor of the semi-pro fantasy fiction zine BARDIC RUNES, was from Ottawa. He actively interacted with the Zorany Shlyah, several times contributing articles to their club zine, including a review of the second convention:

“For a week I was in Kiev… language is no barrier to having fun in Kiev. Many fans have been reading English SF and are eager for spoken practice… [a local fan said] “The aim of a con committee is to gather together as many fans as possible.”… Once the fans were together they made a wonderful convention, with many greetings, with gatherings in rooms, with long and fascinating discussions, with room parties and filk songs… going back to con coms, these are known as ‘Orc Committees’ and those on committees as ‘Orcs1’…”

Apparently the “Orc Committees” term was inspired by the very recent publication of THE LORD OF THE RINGS trilogy in Russia. It was a new craze. Fans were known as ‘Tolkienoids’ and were addicted to a locally invented live-action game based on the adventures of Frodo.

Michael mentions in passing that Alex and Boris took him to the Zoryany Shlyah clubhouse in Kiev after the convention. Clubhouse? An actual clubhouse? That’s almost unheard of in fandom anywhere!

During his visit to the clubhouse a box from a US university containing numerous SF books arrived. Grateful club members had gleeful fun sorting them out.

One final note on the second convention, the Zoryany Shlyah gave out its own awards, the Sitovyds, for the first (and last?) time. They were:

Now, looking through assorted letters from Boris and Alexander for interesting bits:

You’re an adornment of the sky,

Boris had a thing for flying elephants. To this day I’m not certain why exactly.

On the subject of Boris Zavgorodny Boris writes:

“He is number one Soviet fan… first to contact the West… a living legend. That was he sending list of Soviet fans to THE FANDOM DIRECTORY… about 400 names of Soviet fans in this year’s edition. And more, drunken Zavgorodny is like a drunken thin elephant…”

A clue? Flying elephant the Ukrainian version of the proverbial pink elephant?

“What about Boris’s idea of phone call from 1991 to 1990? Isn’t it clever and wonderful? Wish its realization was as successful!”

Once Kiev entered the New Year 1991 Boris attempted to phone me in Vancouver where it was still 1990. Alas, I wasn’t home, being at a New Year’s party elsewhere. ‘Time travel’ communication experiment failed. Oh well.

In response to Al Betz’s ‘ASK MR. SCIENCE’ column in BCSFAzine, Boris came up with an idea of his own which Alexander commented on: 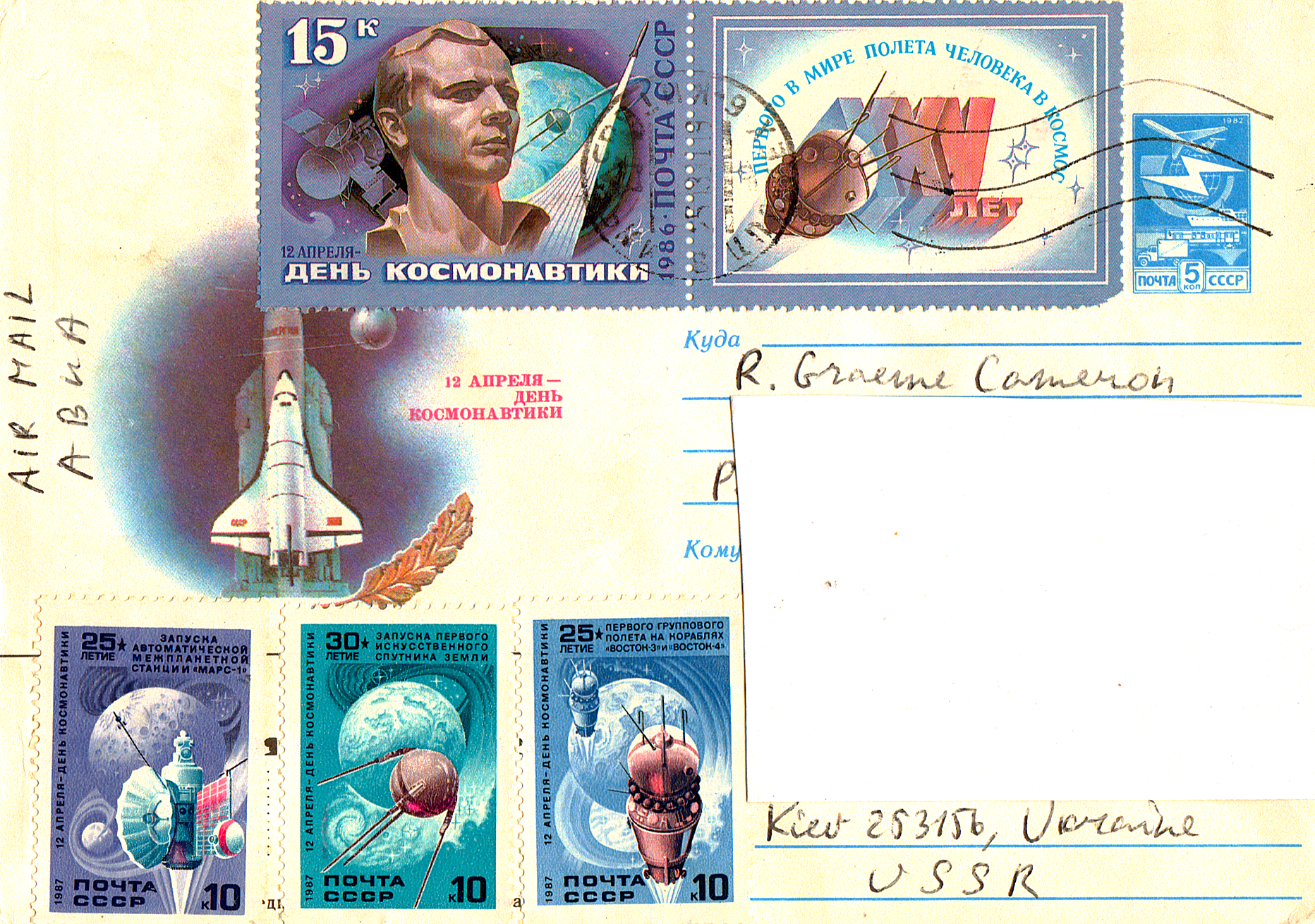 “Boris’s idea about ‘ASK MR. SOVIET’ is very clever. He can answer those questions from orthodox Soviet viewpoint and it can be really funny, though this humour will be blaaaaaack…”

Unfortunately ‘ASK MR. SOVIET’ never materialized. Pity. It would have been a hoot.

Attempting to explain the worth of his monthly salary Boris writes:

And a last bit from Alexander:

“If you could see what we do have in bookstores supposed to sell foreign editions – emptiness and ravaging! The book packages from Canada, USA, UK are really manna from heaven!”

To conclude, it should be understood that the Zoryany Shlyah club of Kiev had a quite an impact on world fandom in its day. Here are just some of the fanzines they traded for:

As well as numerous zines from throughout Europe.

Many an old-time fan will recognize most of the titles above. They represent some of the best and most influential zines of the era (a few are still being published).

I list all of the above titles and loccers to indicate what an impact the Zoryany Shlyah club made when it burst upon the scene in 1990. It was a like a breath of fresh air, offering a perspective quite different from what many jaded fans had become accustomed to in their own fannish lives. Unbounded enthusiasm.

But it didn’t last. Ongoing economic crisis put a dint in the activities of the Zoryany Shlyah club. Their English language clubszine CHERNOBYLIZATION ceased publication in 1992 after the sixth issue. Too expensive to produce in inflationary times.

Still, Boris and Alexander continued to write to BCSFAzine every now and then. As editor I used to feature their communications in articles titled “ZORYANY SHLYAH SPEAKS!” along with reprints of articles from their now defunct zine. The last such article appeared in April 1995. After that we lost touch.

As far as I know the Zoryany Shlyah club no longer exists.

I did hear recently from Ahrvid Engholm, a Swedish fan, that Alexander V. Vasilkovsky shows up at Western European SF conventions from time to time, so still an active fan. Glad to hear it. I hope Alex and Boris are doing okay, but the seizure of Crimea and threat of war must be tense and heart-breaking for them.

I wish them and their fellow Ukrainian fen all good luck and success possible despite current circumstances. Maybe, somehow, things will calm down and improve.

P.P.S. Why is a Soviet era Ukrainian condom depicted? The Yoryany Shlyah sent it to BCSFA as an example of a genuine Ukrainian artifact. That it certainly is.

The Doctor is hot. No doubt about that: He may have started out as a cranky old man, a mad scientist, traveling the universe with his granddaughter – but at least since Tom Baker, the potential for Doctor hotness has definitely been on the agenda. The 21st century revival of Doctor Who deliberately went for […]

Is the growth of fandom limited by neurodiversity?