Let’s take a return trip back to Ink Mage by Victor Gischler. This time around, we look at the completed work originally reviewed here at Amazing Stories. Through the Amazon.com “Kindle Series” format, readers were originally piecemealed episodes of the story over time until the book was completed. So let’s look at the final product.

This is a return visit the stabby fantasy book Ink Mage by Victor Gischler reviewed here earlier. Why? It’s because the original review was limited to the first installment in theAmazon.com “Kindle Series” format where readers are piecemealed episodes of the story over time until the book is complete. It’s an interesting format I’ll look into further, but first we need to discuss the work by Gischler.

What’s the book about? The kingdom of Helva faces imminent danger as the Parranese army crosses the water and invades what many had believed to have been the un-attackable city of Klaar. Soon after, the young Duchess Rina Veraiin finds herself on the run to escape her captors. Fleeing into the mountains, she encounters an aged Ink Mage who secretly takes her in and bestows her with magical tattoos. With these new powers and a ragtag group of friends, she embarks on a quest to regain her homeland. 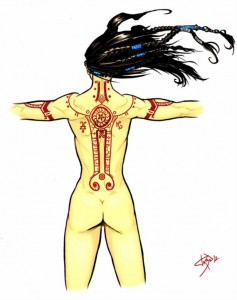 The premise of Ink Mage is very unique. Each distinct tattoo on the mage gives the bearer a special ability. Some are simply enhanced abilities in strength or boosting ones senses, but others come from much darker realms of magic and known only to select mages. The future of the kingdom soon becomes a chess match of magical capabilities. The one with the most tattoos might have better odds, but it doesn’t always mean victory.

All of the major characters in the story are well developed, comfortable and believable. Yes, there is a lot of sex, stabby violence and of course magic, but it never seems gratuitous or over the top. If there could be one complaint about the story, it might be with the brief contribution of the bad guy Ankar. This character is perfectly portrayed, yet he seemed to have potential for a greater role than provided.

The real surprise came in the end, but I’m not talking about the plot here. For such a complex storyline and a vast cast of characters, Gischler was able to neatly wrap everything up by the last page.

Admittedly, I have a bad habit of noticing how close I am to the end of a book. Be it the dwindling number of pages left or the completion percentages displayed on the bottom of an e-reader, I am always aware of my surroundings. If the book is bad, the feeling is usually one of impatience for the conclusion. If it’s good, I’m usually dreading the end because I know I’m going to want more.

In regards to Ink Mage, I sensed the end drawing near. Yet the dread I was feeling was more overshadowed by my wonder of just how this could possibly be wrapped up in such a short number of pages. At one point, I even got angry at the author. First I had to endure (sounds harsher than it really was) the segmented format of a Kindle Series, and now, he is going to leave me hanging – he must want me to pick up the NEXT book of this on-going saga! 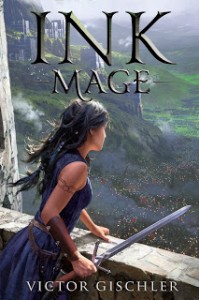 But he surprised me. He did wrap it up. And as a reader, I was very satisfied with the conclusion – and that surprised me. Oh sure, there are a few loose ends that may or may-not lead to further adventures (which of course I WOULD pick up –hint, hint VC), but the mere idea behind the Ink Mage is too fantastic to limit to just one volume. I sure hope it comes to fruition. Otherwise, we might have to endure a bunch of poorly written fan fiction.

Okay, back to the Kindle Series format. I’m still not sure this would work for all authors. Gischler’s involvement with the installment format of comics may give him an upper hand on how to deal with the cliff-hanger mentality, but I can see other writers failing miserably. I definitely got lucky with Victor Gischler’s Ink Mage as my introduction to the Amazon.com format. Would I read another Kindle Series? Yes – but apprehensively.

The Adventure of the Incognita Countess was a curious combination of historical fiction, paranormal romance, and 1950’s sci-fi Martian movie noir.

The Government Has Plans for an Asteroid-Destroying Spacecraft