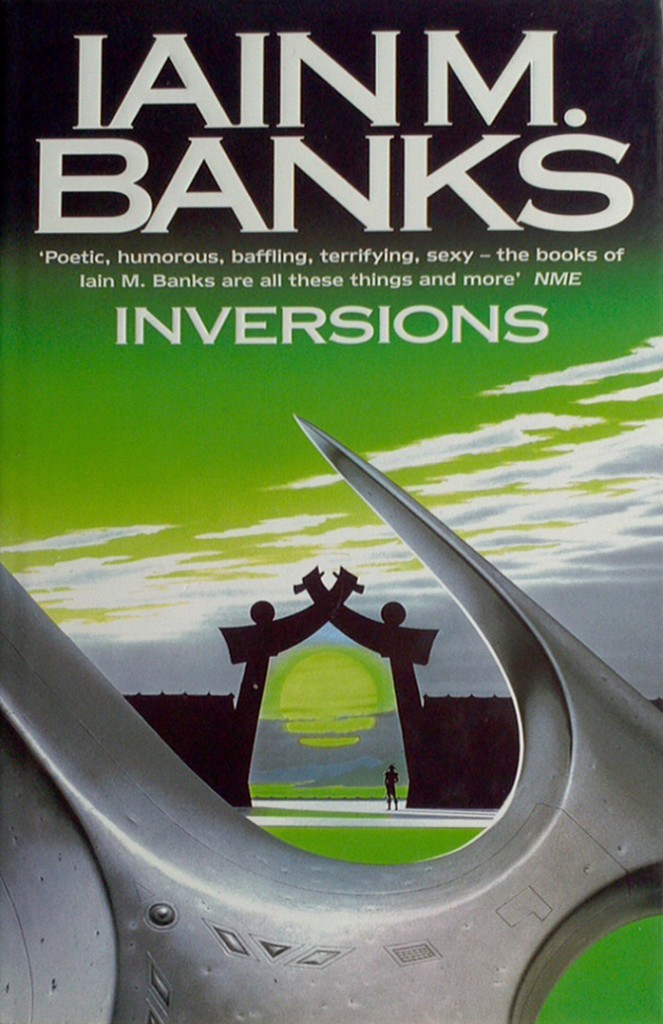 Inversions is one of the late Iain M. Banks less well known and least popular SF novels. It dates from 1998 and is a Culture novel by stealth, chronicling an encounter with Banks’ most famous creation from the perspective of characters who do not know even know the Culture exists. Which may explain the book’s relative lack of popularity – there is none of the widescreen space opera adventure of the previous novels in the Culture series. As Banks told Nick Gevers in an interview for SciFi.com, ‘Inversions was an attempt to write a Culture novel that wasn’t. Also I enjoyed the discipline of writing about a non-historical time without instant communication and smart-ass machines (and also without enchanted swords and other assorted pixie-associated-stuff … though also with the capability of using an enchanted dagger if I chose to … ).’

Although all the Culture novels stand alone and can be read in any order, for those concerned about such things, Inversions is the fifth of the nine novels and fits between the BSFA Award winning Excession (1996) and Look to Windward (2000).

As so often with Banks, the novel has a fascinating structure. There are two interlocking stories. Odd numbered chapters form a report by Oelph to his unnamed master about Doctor Vosill, physician to King Quience of Haspidus. Even numbered chapters, told by an unnamed narrator, tell the story of the Protector of Tassasen, UrLeyn, his son, Lattens, bodyguard, DeWar, and favoured concubine, Perrund.

Vosill is met with suspicion because she is an intelligent, independent woman, ahead of her time in attitude and learning. Her opinionated nature, her resistance to bigotry, the very fact of her being a doctor in an overwhelmingly patriarchal society, gains her the antipathy of members of the Court, some going so far as to suspect her of being a foreign spy or witch. Intrigues and conspiracies abound and mysterious deaths ensue.

When not saving the Protector’s life, DeWar entertains Lattens with philosophical fables of the fabulous land of Lavishia, oftentimes in the company of Perrund, who once protected the Protector at the cost of becoming disabled herself. Oelph falls in love with Vosill, DeWar with Perrund. Then the war begins and personal and national concerns intertwine.

Inversions is an elegant, slow-burning narrative on a long and beautifully lit fuse. For some considerable time the reader is not certain quite what sort of book it is. This is carefully reflected in the original UK cover, which fell midway between the regular black and white packaging which graced Banks ‘literary’ novels, and the full colour of his science fiction, which two words were conspicuous by their absence. The illustration itself evokes a medieval orientalism, then we notice that there are two suns in the sky (the second sun is on the back cover). The text reveals there are also four moons. This is indeed a science fiction novel, though the feel is historical. Inversions could almost, though not quite, be relocated somewhere between our 17th and 18th centuries, an age of Empires, on the verge of the modern world, lush, heady and decadent, a world not yet accurately mapped, and full of the promise of undiscovered adventure.

There are inversions at every level. We first encounter Vosill deliberately taking the life of a patient. The question is raised, should a doctor kill to prevent the inevitable suffering of a man about to be tortured to death? There are many inversions, parallels, echoes and reflections between the two central stories, and the book is, as an entirety, an inversion Excession’s space opera. It is a succession of love stories, stories of different kinds of love, and also a metafictional narrative about storytelling. There are tales within tales, perhaps told by unreliable narrators, and Drezen, from where Vosill claims to come, reads as an idealised nation of islands, located perhaps not so very far from Christopher Priest’s Dream Archipelago.

A formal grandeur in both event and writing evokes the Renaissance and the Baroque, yet there is a warmth to the characters which makes Inversions a haunting Planetary Romance. It is a book as fine as any of the more famous novels in Iain Banks catalogue, SF or mainstream, and that is very fine indeed.

You may also be interested in my tribute to The Invention of Iain M. Banks