Today’s post brings you two poetry reviews of chapbooks by Cleveland poets, one each by J. E. Stanley and dan smith. The Greater Cleveland area is a little hotbed of genre poetry! It is lucky enough to count Mary A. Turzillo, Geoffrey A. Landis and Joshua Gage among its inhabitants. Those three are award-winning poets whose work I’ve reviewed and podcasted here and on Poetry Planet. With this post I bring you two more fine genre poets and introduce a lovely small press (NightBallet Press), edited by Dianne Borsenik, which produces saddle-stitching bound chapbooks and broadsides, attractively presented with heavy paper and color photographs gracing the covers and the interiors. 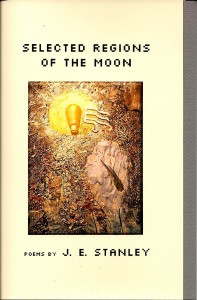 Selected Regions of the Moon, by J. E. Stanley

The blurb from the back of the collection says, “J. E. Stanley is an accountant and on again/off again guitarist from the grayscale suburban wilderness of northeastern Ohio, where he is lucky enough to hang out with the Deep Cleveland Poets and the Cleveland Speculators. He is the author of Dark Intervals (vanZeno Press), Dissonance (Deep Cleveland Press), Rapid Eye Movement (Crisis Chronicles Press) and co-author, with Joshua Gage, of intrinsic Night (Sam’s Dot Publishing). His work has appeared in Amaze, Asimov’s Science Fiction Magazine, Cinema Spec, the Deep Cleveland Junkmail Oracle, Paper Crow, The Rhysling Anthology, Scifaikuest, Sein und Werden, Star*Line, Sybil’s Garage and numerous other mainstream and genre publications. He continues to assert that, winged or not, Man was always meant to fly; the moon and stars were just put there as incentives.”

Selected Regions of the Moon is a small chapbook of 34 pages of poetry containing 32 poems ranging from Haiku (3 lines) and the very short to one long length poem (over 40 lines). Most are what I consider the perfect length – not too short and not too long – somewhere between 10 and 50/60 lines.

Most of the poems in this well-rounded collection are pure Science Fiction Poetry as opposed to Fantasy or Horror or Weird Poetry. The language is straight-forward and I never had the feeling I didn’t know what he was talking about. There are some cleverly combined images:

Yet, who can deny that

The night you left,

the moon was reduced to dust

leaving the whole of the Earth stained

a dull, and permanent, gray.

And yet, there’s something about Stanley’s poems, which touched me in a way different from most. They say so much more than they say, if you know what I mean. I sense a longing in this poetry, which speaks volumes in few words, so eloquently, like good poetry should. And they say accountants are soul-less. The last line of his biography sums it up nicely, I think. Stanley’s feet are planted firmly on the Earth, but his eyes are gazing ever heavenward, literally and figuratively.

There is another world,

of a different, distant sun, light-years away

When I reach it,

I will name it

So many of these poems when Ding! in my head. A delightful thing. And many stuck with me past the turn of the page, willing me to return to them. I wish I could quote more, record more poems from this collection, but then there wouldn’t be anything left to discover for yourself when you buy this collection.

There are a couple of poems that you can enjoy online:

He also blogs at “Cognitive Dissonance” where you can read a few more poems from this collection.

You can buy Selected Regions of the Moon on NightBallet Press, for $5.00 plus $3.00 shipping – just scroll down the page to find the collection on the right. Or on Amazon for $8.00.

Please enjoy the following readings from the collection: 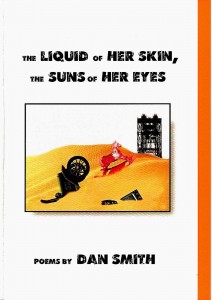 The Liquid of Her Skin, the Suns of Her Eyes, by dan smith

His official blurb: “dan smith, author of the epic poem “i am down with you crooked river”, is widely published.  His speculative poetry has been nominated for the SFPA Rhysling Award.  His spoken word cd, Matinee Motel (2012) is described as “surreal urban poetry…paired with the music of the Deep Cleveland Trio, from jazz to rock to noise”.  Smith’s previous chapbook, Crooked River, was published by Deep Cleveland Press in 2005.”

The Liquid of Her Skin, The Suns of Her Eyes, which is a wonderful title is a slim volume of 34 pages containing a surprising 53 (or so) poems. The vast majority of them are dwarf length – only 5 are longer than 10 lines and those only just. Most are 3 lines long, so a sort of haiku, although I’m not sure they technically can be called Haiku.

I really wanted to like this collection more than I did. There are a few poems that really caught me, but I was left wanting or simply puzzled after many of them. I’m pretty sure that what left me cold was not necessarily Dan Smith’s fault. It’s just the super-short poetry is not really my thing unless it is just, well, super. There was one that I just loved:

the growth of ants in zero-g

and they are hungry

Several poems are staged in worlds of Smith’s creation. One, whose race of 8-eyed Pirates, the KretZikans, was named by J. E. Stanley was quite fun and I’m now intrigued whether Smith has written more, and especially lengthier poems with these characters.

J. E. Stanley is credited as a collaborator on this poem.

At first, I didn’t like the poems dedicated to another race: the “CreEp”, they had 4 appearances, and I wrote a whole paragraph about how I thought it was a little sparse and made the poetry seem random and have less impact than if he hadn’t made something up. However, in re-reading them, they kind of grew on me. I do still wish there had been more  – the poems there were seem like teasers, but I was unable to find more online. I still wonder if it was really necessary to make up a new alien life-form, which sounds so specific, to say what needed to be said. Judge for yourself:

Stars of David and the husks of the CreEp

On thousands of worlds

You can read a few more of dan smith’s poems online at Issa’s Untidy Hut – the poetry blog for Lilliput Review. He also has a poem “believers and non-believers in the first issue of Cattails Online from the United Haiku and Tanka Society. And if you are in Cleveland and have the chance to hear dan smith read his poetry or perform anything else, it seems as though it might be exceptionally worth it!

And for your listening enjoyment excerpts from The Liquid of Her Skin, the Suns of her Eyes: