New app technologies are expanding the range of human senses, Mike Brotherton wants to expand his.

The visible part of the electromagnetic spectrum is a tiny part of the total, and while there are some good reasons we evolved to see at optical wavelengths, it’s not the only possibility.  Some birds and insects can see farther into the ultraviolet than we can, while other animals can see into the near infrared, even the thermal infrared.  Science fiction has not overlooked these opportunities, and in fact the thermal vision of the Predator stalking Arnold Schwarzenegger provided a key plot point. 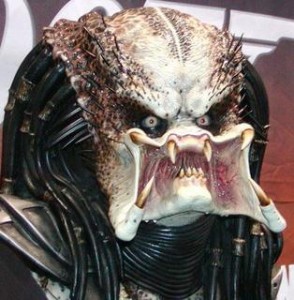 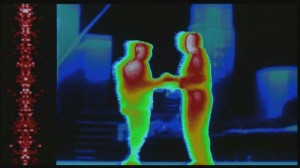 As a multi-wavelength observational astronomer, a science fiction writer, and a gadget guy, I love technology that lets us see with such alien eyes.  I want to highlight a new must-have gadget (for me at least!) coming soon that makes this easier and cheaper than ever.  First, let me remind readers about some of the different technologies and how they are distinguished.

Night vision technology usually describes light amplification technology allowing users to see under low light level conditions.  While modern night vision devices have sensitivity into the near infrared, out to wavelengths of about 1 micron, this is not enough to see thermal radiation from things that are at typical temperatures found on the surface of the Earth.  It is handy to check and see if the light on your TV remote control is still working, however.

True thermal cameras operate in a range around 10 microns, where humans and other warm-blooded animals emit mid-infrared light by virtue of their high temperatures.  They don’t amplify light, but rather just collect infrared light, and will work in complete (optical) darkness.

FLIR is the leading manufacturer of thermal imaging devices, and they have recently announced the most recent item on my for real wish list.  I saw “for real” because the price is something that won’t break me and will open the consumer market for thermal imagers in a way it has never been before.  The FLIR ONE will retail for $349 and work as an accessory to your iphone 5 (and later other brands of smart phones).  The device will basically operate as a camera case, only slightly enlarging the size of your phone, and let you have your own predator vision.  It has some cool features to enhance image resolution and clarity, involving combining multiple images automatically and adding optical overlays.

I want one, and I will get one.