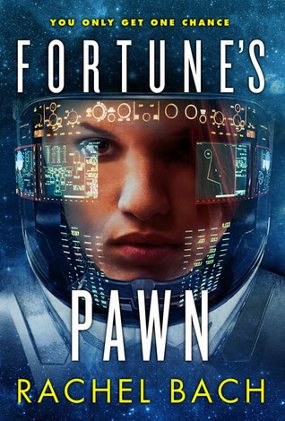 Two weeks ago I asked where all the little people were in SF/F. I said I was tired of all the badassery and wanted some regular people in my stories. It may come as a surprise then, that I’m writing about Devi Morris from Fortune’s Pawn.

She is a badass. She is a mercenary. All she wants to do is be a badass and be a mercenary. So why am I writing about her?

Here’s the thing, I liked Fortune’s Pawn. It’s not The Dispossessed or Ender’s Game. It certainly doesn’t throw anything new into the genre. We’ve seen all this before. Girl is a badass. Girl joins a crew that is more than it seems. Romance and mystery and crazy space battles in armor ensue. So fine, sure, whatever.

Devi, however, resonated with me.

In my last article, I wrote, “There’s nothing wrong with empathetic heroes. We’ll read your story about a prince or a war hero. But they are more than just those things. They are the product of all their thoughts up to that point. They are human beings filled with doubt and loneliness and temptation and absolute, nailbiting confusion. They’ll change their minds, be wrong, be really wrong, screw up, fall in love, fall out of love, crash and burn, and succeed beyond their wildest dreams.”

Devi is all those things. She falls in love, falls out of love, is beset by confusion and temptation and anger. She doesn’t understand what’s going on, and her attempts to figure things out tend to make them worse or fail. She is, in conclusion, human. She’s a human being who evolves over the course of the novel. It’s because she’s human that you begin to root for her, and it’s because she’s human that you’ll feel her frustration and anger and pain.

She wants to be a Devestator. Devestators are space armor wearing, king serving, Special Ops, top of the line, badasses. That’s her life’s goal. Be a Devestator. Everything she does she does for that. It’s easy to roll one’s eye and say, “Oh great, another SF badass who only wants to be more of a badass.” It’s not hard to figure out that being a Devestator will obviously not be all it’s cracked up to be. We know that because we’ve all gotten something we’ve desperately wanted and had it not be as fulfilling as we’d hoped. Yet we were so blinded by our ambition we blocked out whatever we didn’t want to say that rang false.

We relate to her failures because in the end, Devi is brought down not because she is important, but because she isn’t important. Larger forces are at work, and Devi is someone insignificant and caught up in them. The events march over her and leave her behind, and we feel the sting of being the victim of forces beyond our control. Life isn’t fair, and no one cares.

We may not have super-space-robot armor, but we are human too. We know the frustrations of relationships and failure, or not understanding what’s going on around us, and of feeling like we have no control. We know these things because we’ve all felt them, and so Devi achieves something few military badasses in SF manage to do. She strikes a real chord with us, and it’s wonderfully surprising.