Much as I loved Heinlein’s juveniles (Podkayne of Mars, Farmer in the Sky, etc) I became obsessed with Simak. The Way Station stories blew me away, and City was, and probably still is, one of my top ten favourite science fiction novels. 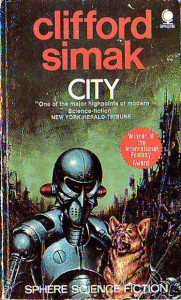 I’m excited to be blogging for Amazing Stories, a magazine I grew up reading. Which brings me to the theme of my first blog. I thought I might delve into the past and talk a little about how science fiction came into my life, and how its influence upon me brought me into a shared world of which I was oblivious until I was a bit older.

Being the shy type as a boy books were naturally a great escape from the unpredictability of the real world. Science fiction in particular not only took me out of myself but it made me appreciate everything around me much more. By the time I’d reached the age of 10 or 11 I had been introduced to the wonders of science fiction by Tom Swift Jr. I vividly recall my parents buying me a new hardback edition of one of the novels, complete with beautiful interior illustrations. I’d be hard pressed to recall the title of that book, but I remember the excitement of bringing it home with me and avidly reading it. 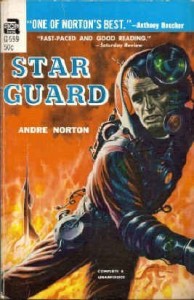 Subsequently I sought out all the science fiction titles I could lay my hands on. This would be the 1960s, before specialized book stores. Finding titles was an adventure in itself. Luckily, our local Woolworth always had a stock of remaindered Ace Doubles.  The many I read included: Star Guard by Andre Norton, The Big Time by Fritz Leiber, Planet of No Return by Poul Anderson, and countless others.

At high school one of the English curriculum books was an anthology of literary short stories. As it happens one of those was The Foghorn by Ray Bradbury. Bradbury, interestingly enough, was the only science fiction author (an epithet Bradbury himself denied) who had any credibility with the English department. It was understandable, when it contained passages like the following:

But the sound of the Fog Horn comes and goes, comes and goes, and you stir from the muddy bottom of the Deeps, and your eyes open like the lenses of two-foot cameras and you move, slow, slow, for you have the ocean sea on your shoulders, heavy. But that Fog Horn comes through a thousand miles of water, faint and familiar, and the furnace in your belly stokes up, and you begin to rise, slow, slow.

Next came Clifford D. Simak and Robert Heinlein. Much as I loved Heinlein’s juveniles (Podkayne of Mars, Farmer in the Sky, etc) I became obsessed with Simak. The Way Station stories blew me away, and City was, and probably still is, one of my top ten favourite science fiction novels.

Robert Silverberg describes City as: “basically an excursion into misanthropy ‑ the quiet cry of someone who has lost patience with his own species. We see mankind ‑ focused, for simplicity’s sake, through the single family of the Websters – making a series of decisions, often disastrous ones, that cumulatively obliterate our history, our culture, everything familiar, and even, eventually, our ties to Earth itself, so that we abandon the planet to sentient dogs, to wise old robots, to mutant supermen and — finally – to the ants.” 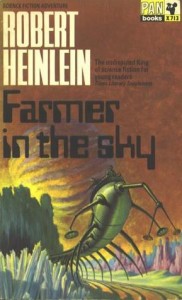 I could go on an on about my early experiences with science fiction. But for making my childhood and early teens a bigger adventure than it might have been otherwise, I’d like to thank Michael Moorcock, Robert Silverberg, Arthur C. Clark, Philip K. Dick, Samuel R. Delaney, J.G. Ballard, John Brunner, Isaac Asimov and others beyond count. Not to mention the magazines, including Amazing Stories, of course, as well as Analog, Fantasy and Science Fiction, New Worlds and the rest.

Thank you all so much!

But I will sign off with one question: how come so many great science fiction writers have a middle initial in their name? Answers on a postcard, please…or in your replies to this posting.

It’s been 115 years since Wells unleashed the Martian invasion on us, and 75 years since Orson Welles made us take to the streets in panic.