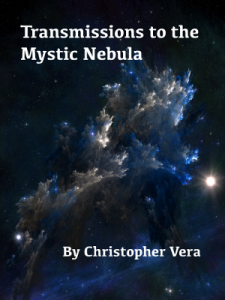 Transmissions to the Mystic Nebula

Transmissions to the Mystic Nebula is a collection of intensely intimate poetry which map a life, somewhat (auto)biographical. Whether it’s the life of the poet himself or a fictional poet doesn’t makes no difference – you are pulled into an examination of events in a person’s life that are momentous and significant.

The collection is organized in a framework of communications with the “Mystic Nebula” by the/a (fictional) poet. This Science Fictional “story” is laid out at the beginning in a “Researchers Note” and the poems are punctuated by beautiful art depicting a Nebula and other space images with status reports regarding the “transmission”. The effect is one that brings us to an other-worldliness and an outward balance to the intensely personal and inward view of much of the poetry. Vera looks at the bizarre and strange in the world and uses imagery-rich poetry to make sense of it – for him and for us.

(ghosts) drift on the wind,
billowing in the whale-skin sky,
fall as rain in some other land.

The Origin of Rain

Vera often starts expansively with some element of the cosmos, be it physical, mystical or spiritual, transforming it into something internal or introspective.

The stars of heaven fall
like golden coins and stain the ocean with their glitter
as I step off the now
into the tide of her silver blue eyes.

He uses gorgeous science fictional and cosmological imagery to bring home the message as in “Birth of a Star” (click the audio link to hear the poem in its entirety – it’s short!) and this passage from “The Astronomer’s Wife”:

and a tear, like of a space walker
seeing the faceted spike of dawn from orbit
for the very first time,
escapes the gravity of her eye,
tumbles gently to earth.

There are approximately 60 poems in this self-published collection, a third of which having been previously published in venues such as Star*Line, Abyss & Apex, Shadow Poetry and miller’s pond between 2004 and 2010. Most of the poems within have been published for the first time and my favorites are among these.

“Birth of a Star”