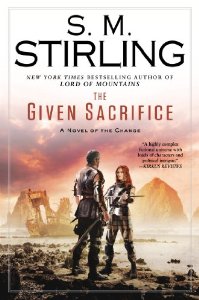 I have been a fan of S.M. Stirling’s Emberverse (or Change) series ever since I read the first book Dies the Fire. How big of a fan? Well you can thank/blame me for most of the Emberverse article on Wikipedia. Now the 10th entry (although unlikely the last) of the series, The Given Sacrifice, is out and I started reading it as soon as it downloaded onto my tablet. Now it is time for a review…

Quick(ish) recap: the Emberverse series begins with the premise that alien space bats changed the laws of physics to prevent electronics and gunpowder from working in 1998 (the date is significant because technically this is a spin off from an earlier series called the Nantucket trilogy), which is called the “Change” by the characters. As can be expected shit hits the fan in a big, bad way. Die off is in the billions as society crumbles and the masses of humanity living in the cities are unable to truck in food or pump in clean water. Cannibalism is rampant, plagues cull great swatches across the world and instead of living paycheck-to-paycheck, people are struggling just to find enough food for their families just so they can live to see another sunrise.

Despite all this there are some glimmers of hopes. People rally around leaders who have a plan to survive…even if it can be weird and/or horrifying. Set around the Pacific Northwest, we see the characters create new communities and nations arise, ranging from a Wiccan “clan” to an SCA inspired pseudo-Kingdom centered in Portland. People learn not just to farm again, but to ride horses and hunt with a bow. Humanity, however, has not lost centuries of know-how even though their toys have been taken away. Everyone still knows about germ theory, gliders are used for aerial reconnaissance and rails are still the most efficient method for carrying heavy goods across the country…except horses and oxen pull the cars now.

The loss of high technology wasn’t the only change to the universe. The story moves quickly away from post-apocalyptic survival tale to fantasy, although it shares much in common with the realistic fantasy popularized by A Song of Ice and Fire. The alien space bats tweaked things just enough to allow “magic” into the world. At first instances of magic in the series was debatable and could sometimes be explained away by science, but in later stories it has become harder and harder to deny its existence. It still remains difficult (and dangerous) to wield that lance and swords are still used to cut away the big problems.

There is also the really important question that gets lost early on in the series because of the struggle to survive: who caused the Change? Because they haven’t exactly left humanity alone and Stirling teases you about them with various hints that describe the perpetrator(s) as God, gods, hyper-advanced humans from previous incarnations of the universe or none of the above. It can make your head spin thinking about it, but you can read more about that at TV Tropes. It can also make the series difficult to classify since it has elements of alternate history, post-apocalyptic, fantasy and science fiction.

There is a lot of magic around the character Rudi Mackenzie; the handsome, charming and preternaturally talented warrior who we are first introduced to as a baby at the end of Dies the Fire, but he does not become a main character until the fourth novel, The Sunrise Lands. From then on the Emberverse story becomes Rudi’s story as we see the spread of the Church Universal and Triumphant from Montana to neighboring lands, the quest to retrieve the “Sword of the Lady” from Nantucket, the founding of the High Kingdom of Montival and the battle that turned the tide of the war in the last book, Lord of Mountains.

I could give a description of The Given Sacrifice, but for people who have not kept up with this epic series, much of what I say will be lost on you. I can say that Montival and its allies, led by Rudi, are now marching toward the heart of the Church Universal and Triumphant to exorcise their influence from the world once and for all. This is the final Rudi story, which means…well I don’t want to ruin the book for other fans like me. Know, however, that Rudi’s daughter Órlaith becomes the primary POV character in the last third of the novel. Take from that what you will.

The pace of the story is quicker than previous novels. Rudi’s quest with his companions across the continent took several full-length novels to tell, so it was surprising that so many important events (across more than a decade) were condensed in just a few hundred pages. I also feel it pointless to recommend this novel. People who have, like me, enjoyed the series will likely read this book, while it is unlikely (and strongly discouraged) for anyone who has not read the first nine books to start here at “the end”. I do recommend the series as a whole, because when a book is part of universe so large and wondrous (did I mention the Roman-inspired republic in Boise, the Vikings of northern Maine or the fact that Prince William is this universe’s Emperor of the West) you can’t help but talk more about the series instead of the book you are supposed to be reviewing…like I have done now.