Home Art The Man in the Torn Shirt 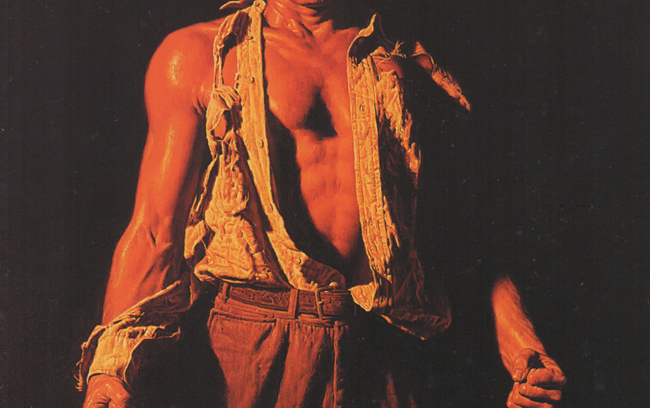 It’s about powerful images and the way that they can become stuck in the public consciousness.

But it’s also about old pulp heroes. One in particular.

I suppose I should start at the beginning. Not back in the 1930’s when Street and Smith released a new hero pulp magazine featuring a super-scientific crime fighter named Doc Savage. Not even in the 1960’s when the adventures were reprinted in paperback format with covers painted by artist James Bama.

For me the beginning was the summer of 1976. I was eleven years old and it was the start of our family summer vacation. Summer vacation for me meant long drives in a hot car with my brothers and I in the back seat. We had made a stop somewhere and my mother sent us in to a used bookstore with a little bit of pocket money to buy comic books to try to keep us interested in something else other than fighting amongst ourselves. 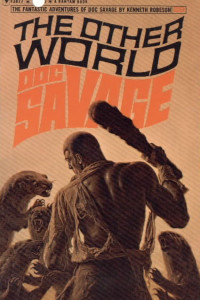 I started rifling through the second-hand paperbacks. I can’t remember exactly what I was looking for, but when I came across the Doc Savage paperback I was stopped cold.

The cover showed a muscled man with a torn shirt and a strange haircut, fending off a trio of weasel-like creatures. The name DOC SAVAGE was blazoned across the top but above it was the name of the adventure: The Other World.

The description on the back of the book got me even more excited. “To the world at large, Doc Savage is a strange, mysterious, figure of glistening bronze skin and golden eyes…”

How could an eleven year old resist that?

I read the paperback and wanted more. Fortunately there were lots around at the time. George Pal had just made Doc Savage, the movie. There were comic books and magazines and plenty more paperbacks all featuring the iconic image of Doc Savage sporting a torn shirt.

An icon is a religious work of art from Eastern Christianity. Depictions of Jesus, Mary and Joseph, saints, what have you, these images were very powerful representations of a people’s faith.

The icon has become co-opted by our society for anything but religious purposes. An icon is a visual representation of an idea or a feeling. It can be a symbols that encapsulates a feeling or an idea. Icons are very powerful, though we tend not to think too consciously about them. But that’s how they work. 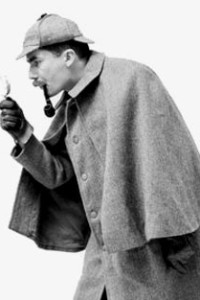 Take Sherlock Holmes. Holmes was never… NEVER… described as wearing a deerstalker cap. The illustrator of the stories, Sidney Paget depicted Holmes wearing a traveling cloak and a deerstalker hat for one adventure. For whatever reason, the deerstalker became permanently associated with Holmes. The deerstalker was a country cap, favored by hunters. To wear it year round, in the city was an absurd thing back in the late 1880’s, yet it quickly became Holmes’ costume. Put on a deerstalker cap and you are Sherlock Holmes. Even the recent BBC TV series Sherlock, which has updated Holmes to the Twenty-First century, could not entirely get away from at least giving a nod to the existence of the famous cap.

Doc Savage wearing a torn shirt ALL the time is ridiculous. Yes, he’s an adventurer and very busy. If, in the course of an adventure his shirt gets torn he doesn’t have time to get a new one. Some bloggers, including Calvin from Calvin’s Canadian Cave of Cool, take to complaining about it, asking why he doesn’t make his shirts out of the same, seemingly durable material out of which his pants are made.

But these questions are immaterial. Doc Savage’s ripped shirt is iconic. It’s as iconic as Sherlock Holmes’ deerstalker, or Tarzan’s loin cloth. 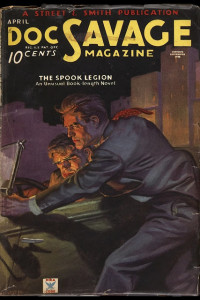 It was not always like that. Just as with Holmes’s deerstalker, the torn shirt is a product of the illustrator.

Doc Savage’s original pulp magazine run featured lots of action-filled covers and on some Doc appears wearing a ripped shirt. In the very first issue Doc’s shirt is torn. Nowhere near as torn as it would be in later covers, but it was there from the beginning. But other covers do not feature the torn shirt. In some cover illustrations Doc is wearing a suit and tie with not a single rip in sight.

When the adventures were released in paperback the job of painting the covers went to artist James Bama. Bama was the one who settled on the image of the torn shirt (the publishers insisted on the weird, widow’s peak hairstyle, but that’s another story) and the torn shirt appeared on every single cover that Bama or any other artist painted, right up until today.

So now, poor Doc Savage has to wear a torn shirt all the time, just like Sherlock Holmes was saddled with his ridiculous deerstalker.

Perhaps Doc will move beyond the torn shirt. There is supposed to be a new movie in the works. Perhaps that will give us a new iconic image for Doc Savage. Maybe something cleaner, sophisticated and less… torn.

Perhaps that is a vain hope. I imagine that the poster for the movie, should it ever materialize, will feature a picture of whatever broadly muscled actor they cast sporting a shirt hanging raggedly about him to better highlight his pectorals and six-pack abs. That image will still overshadow the essence of a character who is so much more than a torn shirt.

Such is the power of the icon.