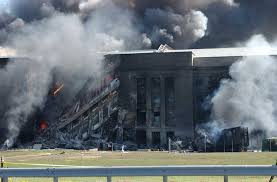 To this day there are people who believe that the destruction of the World Trade Center buildings caused by the crashing of two hijacked airliners and the damage done to the Pentagon by a third plane didn’t really happen the way it’s been reported. They think it was some kind of inside job caused not by hijacked airplanes but by bombs planted inside the buildings. Various conspiracy theories exist to explain who was behind it all.

I’m here to tell you for certain that as far as the Pentagon attack is concerned such theories are nonsense. The damage was done by hijacked airplanes. How do I know? I know because I saw the plane that crashed into the Pentagon with my own two eyes.

On Sept. 11, 2001 I was an editor/reporter for a news organization by the name of the Bureau of National Affairs, since changed to Bloomberg BNA, Inc. That particular morning I was driving up I-395 in northern Virginia to my office in Washington, D.C., listening to WGMS-FM, Washington’s former classical music station (no longer in existence) when a news flash came on about a plane crashing into one of the World Trade Center buildings. It was shocking news, especially when 20 minutes later there was a report of another crash into the other WTC Tower.

I knew Howard Stern broadcast live from New York so I punched the button for his station and heard Howard and Robin and Bababooey freaking out on the air. Despite the news, I followed habit and eased off 395 onto the off ramp for Washington Blvd., the way I always did every morning. Washington Blvd. runs right alongside the Pentagon. Halfway down the ramp, traffic came to a standstill. Suddenly there was a loud noise over to my left, like a tornado loaded with TNT. I turned and saw a big airliner that seemed no more than 10 feet off the ground flying at the speed of a guided missile right toward the Pentagon. It was a moment of complete shock. Something like that, you don’t believe you’re really seeing it.

The off ramp I was on cuts under an overpass where 395 continues on to D.C. There was an embankment in front of me, so  I couldn’t see the Pentagon building directly, but a second later there was an explosion behind the embankment and a huge ball of orange fire.

At that moment I realized we were under attack and the first thing I thought was how many more planes are coming? How big is this? For a moment everyone in their cars sat there stunned but some of us got out of our vehicles and ran up the embankment toward the pillar of smoke that was rising to see what had happened. At the top of the embankment we could look down and see the Pentagon surrounded in a dense fog of black smoke, orange flames, licking through the clouds, and almost immediately the sickening smell of a burning airplane with humans on board.

It took several minutes before I heard any sirens or saw any flashing red lights, but by the time they started I was climbing back down the embankment to my car, shaken. I got in my car and Howard Stern and gang were jabbering away. I clicked the radio off and sat in silence, and there was only one thought in my head. “I’ve got to get out of here!” How in the world first responders can charge into situations like that escapes me. The instinct for survival is strong, and when there’s danger your first reaction is to run.

But we couldn’t run, we were stuck on the off ramp, and it was an uncomfortable half hour until police arrived and made everyone turn around and drive back up the wrong way and follow detours that took us away from D.C.  I drove home wondering what in the world is happening? I just saw something that I never thought I’d see outside of a bad science fiction movie.

It was a day that changed America forever. There’s no denying it. Some things will never be the same. But other things will. The triumph of courage over fear shown by rescue workers, many who lost their lives trying to help others; the readiness of men in uniform to defend and protect the nation and its people; and the hope that someday things will be better, that love can overcome hate, and reason will vanquish ignorance, those things still remain. Let’s hope they always will.