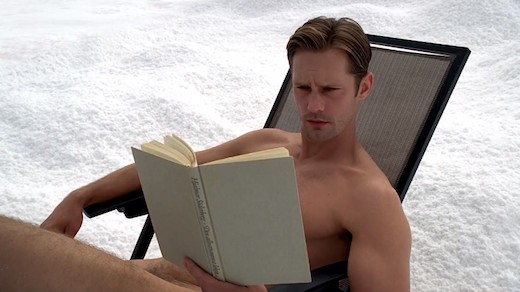 I felt a little bit miffed at first that there were only 10 episodes in this season, especially as it has completely gone off on its own course now. Everything I’ve enjoyed in the later books is clearly never going to make its way onto the small screen adaptation. Especially that of Sookie and Eric getting together for the long term. If you haven’t seen the season six finale then look away now

We saw Eric, enjoying the fact that he can be out in the daylight, but making his way to his native Sweden and sunbathing naked in the middle of a snowy mountain, only to find that the power wore off as Warlow was destroyed back on Bon Temps. We saw Eric burst into flames (watch out for full frontal nudity)…why he didn’t try and bury himself in the snow I will never know – maybe the cold would have put him into a deep sleep? We can only assume that vampire Eric has now seen the true death and Alexander Skarsgård will not be returning to season seven 🙁

The show then skipped forward six months later, and we now have zombie vampires, Bill is an author and former ‘god’, Bill is after Sookie’s attention again, even though she is settled with Alcide, and with the lack of Tru Blood, vampires and humans need to partner up. The humans need to feed a vampire and the vampires need to protect their humans. I have to say, this finale left me saying wow, but not in a good way. Wow to the shock of Eric, but also wow in disappointment to where this show it going. It has lost its edge, all of the characters seem to have ended up in such random situations and the episode to me felt as a whole as a farewell to the show, even though we can expect it back in 2014 for another season.

Did you watch it, what did you think?