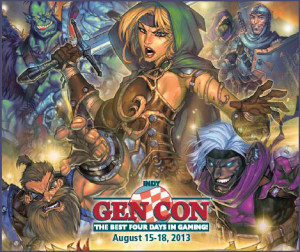 The summer convention schedule marches on. Already we have sampled the delights of E3 and Comic-Con, and WorldCon looms on the horizon. This weekend another destination convention takes the stage, as Gen Con 2013 gets underway Thursday, August 15, in Indianapolis. Tens of thousands will make the pilgrimage for the annual celebration of all things gaming. Gen Con is billed as “the best four days in gaming,” and it would be hard to argue that point. What is Gen Con you might ask? Well, let me explain.

Gen Con is a four day celebration of every aspect of tabletop gaming. Every company that makes board games, collectible card games, miniature games, and roleplaying games will be there. Gen Con is the tabletop gaming industry’s equivalent to WorldCon or E3. Every design effort and every product launch strategy is shaped around Gen Con. New products are brought to the show and unveiled to the public. The eager fans get the chance to be the first to buy these new products as well as purchase other unique items that are only available at the show.

Although the presentations, panel discussions, and cosplay are intriguing, the best part of Gen Con is playing games. Unlike many conventions, Gen Con is a participation sport. Thousands will roll dice, play cards, and role-play in gaming events that will outlast even the most diehard gamer. Attendees will get to compete in world championship events, test out new game products, and explore fantastic realms they never thought possible.

To truly understand Gen Con, we must travel back in time to 1967 when a group of avid wargamers collected together at a home in Lake Geneva, Wisconsin. The group wanted to celebrate their shared passion for wargames. That first gathering was later dubbed Gen Con 0. The humble home that hosted the original event served as residence for a certain Gary Gygax. 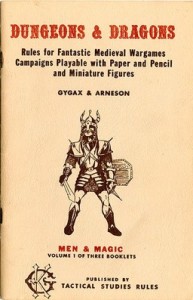 Many consider Gary to be the father of role-playing games and perhaps even tabletop gaming. At Gen Con 2, Gary met Dave Arneson. The duo later teamed up to create the cornerstone of the industry, Dungeons and Dragons. As D&D grew, so did Gen Con. What started exclusively as a collection of wargamers quickly expanded to encompass new forms of gaming.

The name Gen Con was derived from the famous treaties collectively known as the Geneva Conventions which were established to create laws governing proper conduct of nations during wartime. Since the first Gen Con was held in Lake Geneva and the event focused on aspects of wargames, the name, Geneva Convention abbreviated Gen Con, seemed a good fit. The name and the convention have lasted now for over 45 years. During that time, it has become a true icon of the industry.

Its icon status is well earned. Look closely at the timeline of the gaming industry, and you will find the footprints of Gen Con marking every step. Over the years, it has become more than just a convention. Gen Con has become the place where history is made.

In 1993, an unknown game company called Wizards of the Coast arrived at Gen Con with the wild idea that they would launch a new game, a trading card game they called Magic: The Gathering. The wizards were nervous and uncertain of what to expect. When they broke open the boxes, the stampeding horde rushed in. Four days later there was nothing left. They had sold it all. The gaming industry has not been the same since.

The makers of Dungeons and Dragons chose Gen Con to launch their 3rd Edition rule set in 1999. The roleplaying game already owned the industry, but the game system changed everything. The open gaming license was created as part of 3rd Edition. The OGL allowed anyone to make and sell products for use with the rules. This innovation in business practices allowed game designers around the world to join in all the fun. The game’s popularity skyrocketed, and the market had suddenly changed.

Ten years later, when Dungeons and Dragons transitioned into 4th Edition and away from the OGL, Paizo Publishing stepped into the void. At Gen Con in 2009, Paizo launched the Pathfinder Roleplaying Game. Built on the backbone of D&D 3rd Edition, the new rule set gained ground quickly, allowing Paizo to establish its empire. Today Paizo stands at the top of the pyramid leading the way into the future of gaming.

This year, history will be made again. The events that will unfold at Gen Con 2013 are nothing short of amazing.

Wizards of the Coast will host the 2013 D&D Open Championship and will offer eager fans the opportunity to playtest D&D Next while it is still in development. Rumors are circulating that Paizo Publishing will launch yet another new game.

Alderac Entertainment Group (AEG) will conduct the Legends of the Five Rings (L5R) World Championships. L5R is a story-driven trading card game where great clans in an Oriental fantasy world fight for dominion over the empire. While Magic still sits as king of the mountain, L5R is one of the pillars of the industry that has withstood the test of time.

AEG has developed a method to reward their fans beyond anything else in the industry. As in the past, the winner of the 2013 tournament will have the opportunity to shape the path of the game for years to come. He or she must decide between banishing P’an Ku from the mortal realm for all time or simply dispel the avatar. Banishment carries with it a much greater risk to the winner’s clan, while dispelling the avatar could provide the clan rewards. I liken the event to a tournament where the winner instructs Peter Jackson to allow Frodo or Gandalf to keep the One Ring or to destroy it in the depths of Mordor. Mind you that these are not just temporary changes to the storyline. AEG will create new cards and new sets based on the decision of one player. What other game maker or convention offers such fan empowerment? 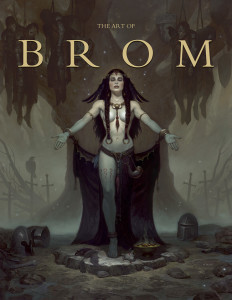 Fans will be entertained by auctions, art shows, seminars, panel discussions, cosplay, anime, and a film festival. Gen Con also hosts the annual Ennies Award Ceremony, where fan voting determines winners across a wide range of categories. The Ennies are the game industry’s equivalent of the Hugo Award. If all that were not enough, Gen Con has constructed a 10,000 square foot life-size dungeon for you to explore. Where else on Earth will you find that?

Regrettably I will not be able to attend this year’s event. I’m hopeful that I will hear from some of you to let me know what I missed. Have fun and happy gaming.

Author’s note to the winner of the L5R tournament: Embrace P’an Ku. Take the power.