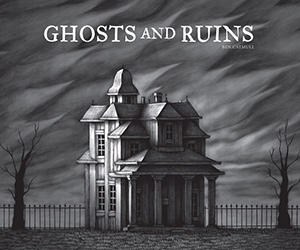 In recent years, a uniform aesthetic has come to characterize visual horror: blue-filtered images, scratchy lines, effects that make things look dirty, stained, rotting. Think of the visual aesthetic of The Ring, the posters for You’re Next, Ben Templesmith’s art. This aesthetic has become so prominent (and is so effective at conveying tone) that we can almost forget that there are other styles that can be equally frightening.

Ben Catmull’s new collection of short haunted house and ghost stories, Ghosts and Ruins, reminds us forcefully of just how powerful other visions of horror can be.

Ghosts and Ruins collects 13 short tales about ruined structures and the undead that haunt their halls. Neither purely prose nor comics, Ghosts and Ruins is a horror picture book for adults. The left-hand page of each story is a sentence of two, with the facing page an illustration related to the text. Some stories are as short as these two pages, other stretch across eight or ten pages.

Catmull’s art style immediately sets the book apart from the current horror aesthetics. His images are rendered using scratchboards, in mellow grays and whites. The scratchboard work combined with the color palette gives the images a softness that invites the reader to fall headlong into them. Some of the images—particularly an interior of the crumbling home in “The Crawling House”—suggest a physical depth that seems practically impossible to achieve in art.

The softness of the lines, though, can make it hard to initially conceive of this as horror. There are crumbling buildings, yes, and a sense of doom, but you’d be forgiven for seeing gothic as much as horror.

But the horror is undeniably present, as proved in the book’s most powerful and terrifying story: “The Sculptor” (spoilers ahoy). The story starts, as they all do, with a home: in this case, the Dali-esque abode of “a relentless and prolific sculptor who worked himself to death.” Upon entering the home, we discover the place is packed baseboard to crown molding with failed pieces—but also that the sculptor’s workaholic ghost continues to refine the pieces. The sculptor’s ghostly aesthetic is minimalist: each revision to his sculptures shears away features, making each piece progressively more abstract, less human. That process affects people who stay in the house, too. That progressive reduction is shown in a pair of triptychs: A woman; The same woman missing a section of her head, an eye, and a section of her cheek; The woman now also lacking half her face, the skin of her check, most of her hair, her nose, now less human than an abstract vision combining humanity and death.

The mutilations wrought in “The Sculptor” are disturbing and terrifying, but there’s something sad about them too. Something in the combination of the ghost’s pursuit of perfection and the woman’s loss of self moves the viewer to empathy.

This is one of the great achievements of Catmull’s work. By making his art soft, expressive, static, he avoids the shock-driven, action-sodden hyperbole of much visual horror. By making contemplative, sad images, Catmull is making a different kind of horror.

Just how different is revealed by the other surprising element present in many of the stories: humor. You’ll be surprised how many characters in Ghosts and Ruins are really funny. There’s a ghostly, asthmatic goat who’s very slow, making him “easy to avoid” but “he will not stop coming for you”—an effective combination of humor and horror. Funniest of all is Drowned Shelly, a girl killed by her father. Like many ghosts, the right combination of words and action can invoke her. The wrong combination, however, prompts her to appear and kick you in the crotch.

Horror isn’t traditionally good at conveying the entire range of human emotion. It can offer fear, dread, disgust. Really accomplished horror can add sympathy, sadness, tragedy. But the rarest horror can offer these elements as well as subtlety and humor. Josh Simmons, probably the greatest horror comics practitioner right now, employs a shocking, in-your-face humor that makes his work all the more horrific (“sometimes you get your throat cut while a clown is pulling down your pants,” Simmons told The Comics Journal). With his quiet, contemplative approach, Catmull captures fear, humor, and sadness in a thoughtful collection that sits comfortably among the best recent horror art.