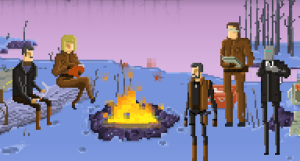 I’ve gotten twenty days into the grueling forty day marathon that is Gods Will Be Watching, but never further. In the end, I feel like that says something more about me than it should: I know how I can survive, but I don’t do it. Gods Will Be Watching teaches that failure, sometimes, is preferable to soul-darkening success, at least in my mind.

Gods Will Be Watching is a free, online survival game (playable here) made by Deconstructeam, a Spanish indie developer, for Ludum Dare 26. Ludum Dare is a game jam, the kind of event where people get together to make featured games (if not fully-featured ones) over the course of a weekend. Ludum Dare 26’s theme was minimalism, and all the games represent it in some way.

As a title, Gods Will Be Watching takes place on one screen, where your character, a sergeant in charge of a research mission on a remote planet, huddles his group around a fire pit. There’s an engineer, his psychiatrist wife, a doctor who looks out of Lost in Space, a soldier, his pet dog, and a robot assistant. Your task is simple: survive for forty days in an inhospitable alien wasteland, repair your only radio, and use it, when the time is up, to contact the only ship that will pass by in that time.

Until then, you have to hunt for food, repair said radio, tend the fire, and keep your people from going insane. You also have to deal with the Medusea virus, the disease your people were here to study, and the one which now, occasionally, ravages their bodies.

How this plays out: every day of the forty, you’ll be given actions, one for every person you have left alive. You’ll talk to them, or go hunting, or light the fire, or give a rousing speech. You’ll do something to try to stave off the inevitability of death.

And you will die. Like its remote cousins, survival cooperative board games like Pandemic and Flash Point: Fire Rescue, Gods Will Be Watching demands constant vigilance and an ability to accept defeat. I have no idea how it ends; I’ve never gotten past day twenty. And, like Pandemic, that’s kind of the point: the events you’re facing are so overwhelming, so difficult, that you can expect nothing but failure.

After a number of failures, I decided to look online, at how other people managed to survive Gods Will Be Watching’s forty day runtime. The results weren’t heartening.

Before you go any further, I recommend playing the game. It’s pretty easy to do. Here’s the link again.

Most of the conversations on the internet told me that I was playing the game wrong. The goal, after all, isn’t to make sure that all of your charges survive through the forty days in the wasteland; it’s to fix the radio, and have one survivor left to communicate with the overhead passersby when they come. Your goal isn’t survival, but instead stopping the terrorists who stole your data, the ones who will threaten the galaxy if nobody knows of their existence.

The way to beat the game, they say, is to work most of your group to the bone. The soldier, who hunts with bullets? Kill him. You need bullets to survive animal raids. The doctor? Once he makes a bit of the Medusea vaccine, he dies, too. The psychiatrist? Don’t need her, either. Talking works just as well when you’re nearly alone.

The easiest path through the game involves killing everyone but the engineer, let him fix the radio, then ride out the storm with him. Maybe you can keep someone else alive, maybe the doctor, to make sure you still have medicine.

Me? I couldn’t do that. The concept is anathema to me. Gods Will Be Watching proves I’m not cut out for a survivalist, end of the world scenario. And that’s what good fiction, in any form, does: it asks us questions of ourselves. Gods Will Be Watching adds in the videogame twist, too: it expects us to answer. Here, I’m not able to give it the answer it wants, and so I’m still stuck, barely getting halfway before my group goes insane and tears itself apart.