Home Fandom Rockets and Missiles: Past and Future

This is more than just a book review. This is an examination of a cultural icon many of us in the fandom recognize and cling to. There is the reason many awards in the literary field of science fiction are fashioned after this symbol. Rockets are sexy, and I don’t mean in a phallic sort of way. They represent the fantastic entering into the real world.

Admit it! Rockets are cool. 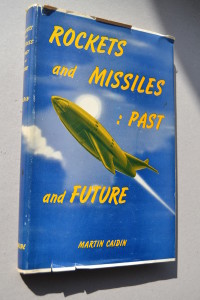 So, what makes these occasional McGuffins so intriguing? Perhaps if we look at them from a more analytical or historical perspective, we can narrow it down. In 1954 (yes, nearly 60 years ago), The McBride Company published the book Rockets and Missiles: Past and Future by Martin Caidin. The cover sketch is pure retro – crisp rocket artistry at its best. As a writer, the image is inspiration enough to make one dig deeper and discover the wonder behind these romantic vessels.

Rockets and Missiles is not what I would consider a literary thrill ride. With all of the latest technical advances, the book is not exactly an accurate source of information for writers of future space exploration either. It is however a delightfully historical account of man’s progression into rocketry and a wonderful reminder of the passion and determination that kept the field going. This is truly why rocket designs are so sweet. Like the science fiction genre itself, rockets come from the spirit of imagination.

Dating back to 1232 A.D., the South China city of Kai-Fung-Fu used one of the first known rockets in a war against the sieging son of Ghengis Khan. The early rocket known as an “arrow of flying fire” was basically a flaming arrow which spread its flame over a ten foot diameter upon impact. Not necessarily the lustrous image portrayed in Flash Gordon rockets supported by strings and spurting sparks, but I guess you have to start somewhere.

The book looks at the evolution from black powder power to the early variations of liquid propellants. The detailed history of guided missiles along with the German, Japanese, Russian and British efforts and contributions in the field are also discussed. Through many of the black and white illustrations provided by Fred L. Wolf and Wally Littman, readers will appreciate the ardent efforts of research and development from around the globe and throughout the years. After all, who doesn’t get a little excited at the vision of lab coats and smoke?

By page 197 of a total of 208, the reader finally finds the “introduction” to space travel. Inevitably, the author gives science fiction a lot of credit for contributing to the “speculation” of space flight and helping lead to the eventual seriousness of the research. It is pointed out that the American International Planetary Society was founded on March 21, 1930 by a group of science fiction writers and later evolved into the American Rocket Society. And once Willy Ley of the German Rocket Society performed a technological demonstration for G. Edward Pendray of the American Rocket Society in 1933, the fantasy of space travel suddenly became a real possibility. The “what-if” question was answered. It should also be noted (though not in this book) that Ley dabbled in writing science fiction under the pseudonym Robert Willey.

Rockets and Missiles: Past and Future is a bit outdated, but well worth the reader’s time. It’s a blast from the past (see what I did there). The author closes by speculating that man’s future perspective, long after space travel is developed, may be filled with distain considering a lot of the rocket’s development was derived from weaponry. We didn’t need to see Slim Pickens riding down on the bomb a decade later to agree with his caution. We get it. Let’s just agree, from a space traveler’s point of view, rockets are and always will be cool.

Not to be too downtrodden by the end of the book, author Martin Caidin does leave us with the inspirational, “certain prospects we can foresee in the certain knowledge that some, if not all, of our predictions will come true.” So come on all of you science fiction scribes. Let’s dip those pens in the inkwell (or use your favorite word processor) and start romanticizing about those sleek rockets with sweeping fins blasting through the galaxy! Like the guy said, we’re not done yet. So let’s create a future filled with the coolest spacecraft imaginable! Why?  Because rockets are cool!