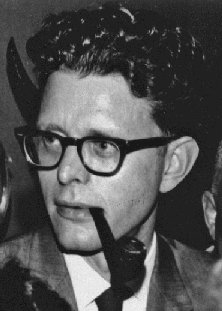 Sometimes great books come and go, waiting for another chance to be discovered and given the place on our bookshelves they truly deserve. Sword & Sorcery is no exception. In 1951, Poul Anderson wrote what was a labor of love, a Fantasy based on the mythology of his ancestors, the Scandinavians. The book was called The Broken Sword. It appeared in hard cover, had one print run, and then….disappeared. Anderson returned to writing Science Fiction, the genre he is known for 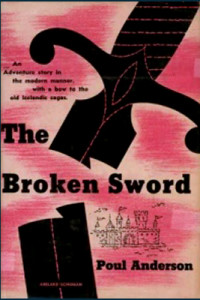 best. He stayed away from Sword & Sorcery though it sometimes poked through in the stories he wrote for Planet Stories, such as “Witch of the Demon Seas” (January 1951 as A. A. Craig) and “Swordsman of Lost Terra” (November 1951). These stories belong to the crossbreed genre known as Sword & Planet, but are so temptingly close.

The Broken Sword recounts the story of Skafloc and Valgard, the human and elf child switched at birth by the elf-earl Imric. To regain his birthright as the son of Orm the Strong, Skafloc quests for the legendary broken sword forged by the gods. Anderson weaves a great story into the history of England during the Danelaw. We get both the mythology of Faerie and the harsh way of life at the beginning of Christianity in Europe. Much slaughter ensues as any good Norse tale should. 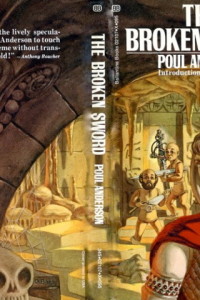 But not the stuff of great sales during the machine age of Science Fiction, the 1950s. But things changed by 1965, with the publication of The Lord of the Rings as well as Lancer’s Conan re-issue in paperback. Fantasy was back and in a big way. Lin Carter developed the Ballantine Fantasy Series for that publisher, re-issuing old books that had once been part of every Fantasy fan’s library but were now hard to find. One of these books was, of course, Poul Anderson’s The Broken Sword (along with newly written the Norse epic Hrolf Kraki`s Saga (1973). Suddenly, Anderson`s tale of the Norse was an instant classic!

It’s hard to look at The Broken Sword as one book because it was a startlingly wonderful work in the doldrums of the early 1950s (before Tolkien`s The Lord of the Rings in hard cover, remember) and at the same time an essential part of the 1970s explosion of Sword & Sorcery. The success of the reissued book pushed Anderson back into mythology mode and he continued to write about his soulless elvenfolk in the novellas “The Merman`s Children“ (1973) and “The Tupilak” (1977) to become The Merman`s Children (1979). He also penned the Norse side of the dual tale, The Demon of Scattery (1979) with Mildred Broxon Downey writing the Celtic side, and most recently The War of the Gods (1999). 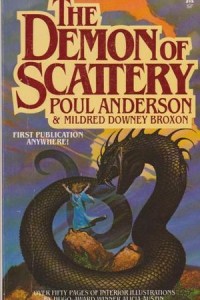 Poul Anderson`s contributions to Sword & Sorcery are important, not just as one of the authors (who like Fritz Leiber and Jack Vance) who kept S&S alive until the flood gates opened in 1968, but as an innovator. Anderson showed S&S writers that it was not necessary to write only from the Howard or Tolkien mold, that history and mythology, the `Northern Thing` that inspired both of those authors, could feed the imagination in many ways. His work helped pave the way for many of the more historically oriented writers such as Keith Taylor and his Bard series and Charles Saunders and his African backgrounds in Imaro.