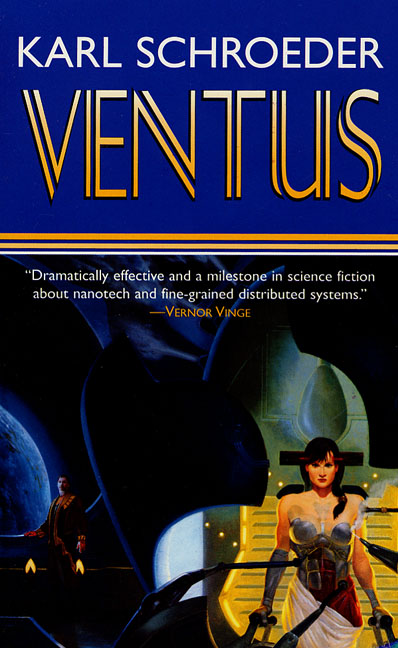 I picked up Ventus awhile back because I enjoyed the author’s other work, Permanence, but didn’t get around to reading it until my wife and I went on an anniversary vacation (yes, we read on our vacations, we’re just that nerdy). Ventus offers a very interesting story that in many ways epitomizes the “planetary romances” of an earlier age and the staple of SF, space opera. The book is long, clocking in at 782 pages, divided into three sections that follow the journeys of teen protagonist and Ventusian native Jordan Mason; Armiger, a Ventusian general and avatar of 3340; Calandria May and Axel, representatives of the wider human community called the Archipelago, who find themselves on Ventus hunting for Armiger and seeking the secrets of the unique ecosystem of Ventus.

You see Ventus is a planet where machinery and machine intelligence are a third biota alongside flora and fauna, called mecha. The mecha were introduced as nanotechnological terraforming agents and literally hold Ventus together. They have created a worldwide network linking every elemental member in a hierarchy of expanding intelligence, from sodium and nitrogen atoms, to table salt, to the rocks and sand along a beach. They act within the environment of Ventus, manipulating it to their unknown (to the protagonists) will. The communication between all orders of the world that maintains the delicate balance between the living (flora, fauna and mecha) and the elemental world is called thalience.

However, because of this mission in balancing the interest of human, environmental and elemental worlds humanity on Ventus is prevented from advancing beyond a feudal European/colonial American technological stage. Whenever large scale, highly polluting industry is introduced and changes the chemical makeup of an area, greater amounts of carbon dioxide, sulfur, heavy metals, thalience sees this as threat and obliterates the offending culture.

The problems here are obvious. Few people in Jordan Mason’s society have any idea how their world operates and have instead built up complex religions and mythologies to explain it. Humanity is shut out of thalience. Armiger arrives to take advantage of this system, after all, what interstellar warlord wouldn’t want the intelligent environment of an entire world at his disposal? Need a new fleet of ships? No problem, just command the elements to combine into your fleet.

The story is a very traditional hero’s journey that touches on deeply philosophical matters, such as human ideals, going all the way back to Plato. What is the nature of Truth and Beauty, as well as truth and beauty? And how absolute are human ideals What if you could have the environment’s input? Ventus offers plenty of fodder for an intellectual discussion. Jordan Mason escapes his provincial lifestyle to go on a quest with Calandria May and Axel to stop Armiger. He expands his knowledge of the world through these meetings with outsiders, as well as people of his own planet such as the Mad Queen, Galas. Galas’s madness, and growth from secondary to main character in the second act of the book, is that she rejects certain absolute ideas her people possess, about gender roles, human nature and “absolute truths” and instead encourages experimentation and challenging tradition, incurring the wrath of thalience. All of this, planetary and interstellar, comes together in the books third act as the characters come to terms with Ventus’ place in the universe and their place on Ventus.

My complaints regarding the book are few, and don’t detract from the overall enjoyability of the work. First, the book could stand for another good proofreading, there were several spelling and grammatical errors that stood out as unsightly, but did not change the story. Second, the main antagonist, 3340, was, until the conclusion, mostly a background force of evil, and one about whom I knew very little, especially regarding his (its?) motivations. I accepted this, from what the other characters, including 3340’s own avatar, the bad guy was a legitimate bad guy. But still, I would have liked to understand and know him just a little better.

This backstory is, I suppose, what the prequel, Lady of Mazes , is for. Lady of Mazes has been put on my to read list, because I want to read more stories set in this Archipelago universe created by Schroeder. The world one meets in Ventus is an expansion of our ideas regarding the “natural” and humanity’s interaction with its environment, and well worth reading for the reader dedicated to finishing it.