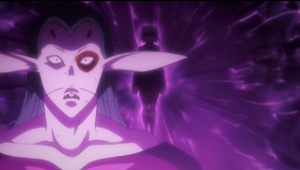 Hunter x Hunter #84 – One of the recurring features of shōnen series is a tendency to look at characters exclusively through who they can and can’t defeat in a fight. The shōnen world can be arranged like the early zoological idea of the Great Chain of Being, only with every lifeform in existence ranked according to who can kick whose butt, insofar as they have butts. In the generic shōnen fighting manga, the plot will be almost exclusively devoted to keeping track of the league tables.

So to recap the rankings here: Gon and Killua can individually defeat the lowest-level Chimera Ant soldiers, but teamed up are equivalent to a higher-ranking one such as the pre-enhanced Rammot. Kite is powerful enough to make a squad leader like Hagya retreat from him without a fight, but Rammot, after levelling up, clearly feels that he can defeat the un-Nen-powered squad leaders as well.

Now here comes Neferpitou, whose aura is strong enough to make even Rammot cringe and grovel. Logic now dictates that the next fight has to be Kite vs. either Rammot or Neferpitou so that the top few rankings can be clarified.

It was nice to see that Pokkle managed to hold out, after the assumption he was already dead… well, no, considering what happened next, I guess it wasn’t. (Once again, this is a kids’ show!) 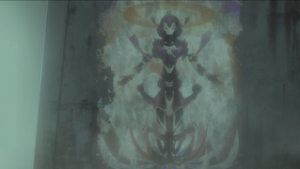 Gargantia on the Verdurous Planet #11 – And speaking of assumptions and bodies, they never did show Lukkage’s dead body, did they? And sure enough, there she is.

By the same token, I for one am not believing that Commander Kugel is alive, relatively healthy, and present in Striker’s cockpit until we actually see him there. Especially as Striker seems to have no problem just interacting with anyone other than Ledo directly.

Pinion seems to have been shocked back into reasonableness by the appearance of Striker’s fleet. (Or, the script editing is getting erratic.) After proving that he is an engineering geek at heart by completely forgetting about anything else he was doing because OOO SHINY MYSTERIOUS OBJECT and being absorbed along with the rest of the Gargantia breakaways, that leaves the stage open for Ledo to be the last one able to save the day. 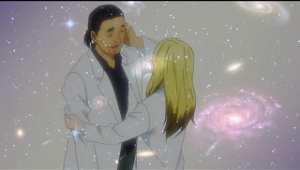 Space Brothers #62 – And it appears that Sharon Kaneko is outranked by a neurodegenerative disease to be named later. For viewers who joined this season and are mystified that Mutta has an aunt who is a white person born in the US, the explanation lies in Japanese honorifics.

As a kid in the US might be taught to address adult strangers as “ma’am” or “sir” or “mister”, in Japanese the respectful way of addressing random adults significantly older than oneself is with oba-san and oji-san, which are literally “aunt” and “uncle” plus the -san honorific. Mutta calls Sharon oba-chan, with the -chan indicating more closeness than -san. In past episodes, Mutta has observed that Sharon is more supportive of him than his actual parents sometimes, and it’s been implied that Sharon sees Mutta and Hibito almost as the kids she never got to have since her husband died so young. So “Aunt Sharon” really does translate the sense of the address, I think.

More translation murkiness: Ellington Field, which really is where the T-38 trainers are based in real life, is rendered in the informational text for the Japanese audience as Ellington Hikōjō. Now, hikōjō is akin to “airfield”, but it can also be translated as “airport”, although usually a full-featured commercial airport is kūkō. Thus the English translation of the on-screen text winds up giving it an upgrade to Ellington Airport.

Not that the Japanese translators were any more consistent. While the text calls it hikōjō, in Mutta’s narration it’s “Ellington Field Kūkō“. Argh.