A vaguely familiar sound woke me and I sat up in bed.  “What’s that noise?” I asked.

“It’s a deadline,” said a translucent Douglas Adams, who for some reason was sitting in a chair drinking tea in my bedroom.

I dropped back to my pillow and closed my eyes, figuring the deadline would pass and the apparition would go away, but the whooshing sound continued unabated.  I opened one eye to confirm that the ghost hadn’t gone away either.

“You’re supposed to be writing a Towel Day blog for Amazing Stories Magazine.”

“Yes, it takes an awful long time to not write an article,” he said.

I attempted to get rid of the specter by promising to write it over the weekend, but he would not be dismissed so easily.  At the suggestion, the spirit raised a frightful cry and shot up out of his chair.  I hid partially behind my blankets, daring only to peek out over the top.  The apparition turned to inspect his chair and picked a small pointy object off the seat.  He examined it for a moment before flicking it away, sending it tapping across the floor.

Adams resumed sitting and said, “This weekend will be too late.  Towel Day is Saturday, May 25th.  I am here tonight to warn you, Ebenezer, do not miss that deadline!”

“Whatever.  You will be haunted by three spirits.”

“I don’t think that will be necessary,” I said.

“Without their visits,” said the ghost, “you cannot hope to understand the importance of towels and Towel Day.  Expect the first when the bell tolls one.”

I think he kept on talking, though I can’t be sure.  I dozed off and was dreaming sweet dreams of procrastination.

I was awakened again by the noise and searched my memory in an attempt to discern what it might be.  “Are you sure that’s a deadline?” I asked.

“Well, I’m either dead or my watch has stopped,” said a different, though familiar voice.

I sat up and saw the stooped figure of Groucho Marx, cigar in hand, at the foot of my bed.  His greasepaint mustache and eyebrows were the only opaque features of his otherwise semi-transparent form.

“Well, come on, I haven’t got all night,” Groucho said.  “I lost the other half in a poker match.”

“Have you come to show me the importance of Towel Day?”

“Actually, I haven’t the slightest idea what Towel Day is, but I used a towel once when I was in Cincinnati.” 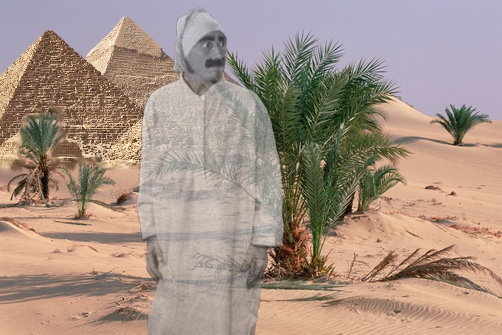 The spirit moved toward the door and motioned for me to follow, which I did reluctantly.  As I reached the doorway, the room started to swirl like colors in a paint mixer and suddenly we were standing outside on a sunbaked expanse of sand.  In the distance I could see several pyramids.  Closer at hand was a stand of palm trees with an Egyptian and a camel resting in their shadows.

“I thought towels were invented by the Turks,” I said.

“Quiet, didn’t anyone ever tell you it’s not polite to correct your ancestors?”

Upon seeing us, the Egyptian stood and walked in our direction.  He cradled a black cat in his left arm.

“Here we see a man wearing a towel,” Groucho said, indicating the Egyptian.

“Are you gonna teach this class, or am I?  Now, as I was saying, here we see a man wearing a towel.”

The Egyptian arrived and I noticed he bore a striking resemblance to Chico Marx.

“Alright, what am I doing in Egypt?” asked Groucho.

“I don’t know either,” said Groucho.  “Well, anyway, as I was saying, see the man here with the white towel?”

“Alright, you win,” Groucho said and he waved his ghostly hand.  “Moving on.”  The scenery swirled again.  “I can think of no better place to demonstrate the importance of towels than a women’s locker room.”

We were standing in a locker room occupied by five women wrapped in towels.

“On second thought,” said Groucho, “I can think of no better place to demonstrate that towels should be outlawed.”

One of the women screamed, another threw a tennis shoe at us.  Before the shoe could hit its mark, the room spun and we were back in my bedroom.

“Well, there you have it,” said the ghost.

“That wasn’t particularly informative or convincing.”

“Why, you upstart!  Go back to sleep!  And never darken my towels again!”  With that the spirit vanished.

I woke once more, now thoroughly annoyed by the sound.  “What is that noise?!!”

“That’sa you whooshing,” said the ghostly figure of Chico Marx standing next to my bed.  He was now dressed in his more familiar shabby clothes and a Tyrolean hat.

“Yeah, that’sa you whooshing you could get’a some sleep.”  He slapped his knee and added, “That’sa some joke, huh, boss?”

“Let me guess, you are the second spirit who is to visit me.”

“That’sa right.  You lucky, I have’a some extra time tonight.  I won it in a poker match.”

“Well, we might as well get it over with,” I said and climbed out of bed.  Near the doorway, I spotted some water on the floor.  “Hey, where did that puddle come from?” I asked.

“Puddle?  No, no puddle here, the landlord donna allow pets.”

“I don’t have a landlord and there is the puddle, right there.  I can see it with my own eyes,” I pointed at the small pool of water.

“Who ya gonna believe, me or your own eyes?” said the ghost.

Before I could begin to argue the matter, the room twisted inward and we found ourselves on the sidewalk of an ordinary city street still wet from a recent rain.  Pedestrians streamed by, indifferent to our presence. 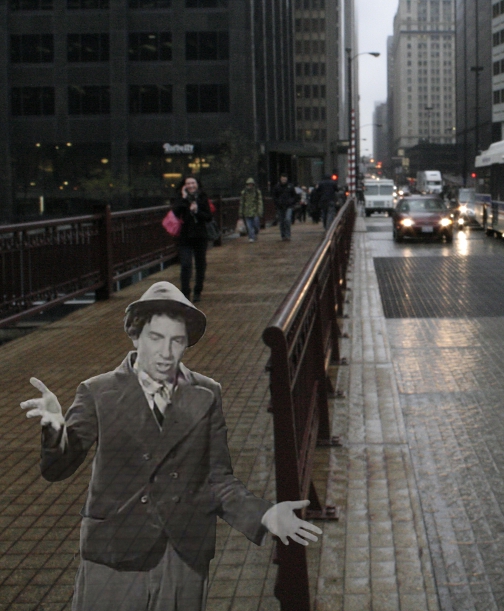 “Why do they walk past us like that?  Are we invisible as spirits?” I asked.

“Nah, they just’a no care about us.  That’sa alright, we not here for them anyway.  We lookin’ for someone with a towel.  There’sa one,” he said, pointing across the street.

On a stone bench outside an office building, two young women with towels draped over their shoulders sat eating lunch and laughing together.

“You know why they gotta towels on’a their shoulders?”

“They are messy eaters?”

One of the women wiped the corner of her mouth on her towel after a particularly big bite of her sandwich.

“No, no, that only goes’a to show that a towel is about’a the most massively useful thing the interstella hitchhiker can have.  She can use it to wipe’a her face.  She can use it to avoid’a the gaze of the Ravenous Bugblatter Beast’a of Traal, or maybe she avoid her boss who just’a give her a bad review and no raise.”

“If she just got a bad review, then why is she laughing?”

“Well, I guess sanity is a good cause,” I said.

“But seriously, boss, you gotta write the article or else’a bad things happen in the future.”

“Oh, no, no, that’sa for the next ghost, the Ghost of Towel Day Yet to Come.  He gonna show you what the world be like if people’a no celebrate Towel Day.  He show you all’a bad things that gonna happen.”

“Oh, you no thank me, I’ma getting paid.  Come, I show you another use of’a the towel.”

The city street scene whirled away and was replaced by a women’s locker room.  Four women were wrapped in towels.

“I already did this with Groucho,” I said.

“Yeah, I know, but you know what’a they say?  One good peep deserves another.”

We exited just before being hit with a tennis racket.

The sound was now even more annoying as it seemed interspersed with a honking noise.  I sat up to look around and found Harpo Marx sitting on my bed dressed in a trench coat, top hat and holding a ball horn.

“You must be the Ghost of Towel Day Yet to Come,” I managed to croak through my exhaustion.

He nodded with enthusiasm and honked his horn twice.

I groaned and hauled myself out of bed.  The puddle I had noticed earlier had grown and now covered half the room.  I considered asking Harpo about it but decided it would be useless.  His hand pointed toward the door and I followed as the now familiar swirling swept away my room and replaced it with the Washington Mall.  We stood in front of the Capitol Building in a future that looked like a modestly higher tech version of the present.

“How am I supposed to understand what it is you are trying to show me?” I asked.

Harpo reached into his coat, pulled out a telescope and tossed it aside.  Then he pulled out a live chicken, a baseball bat, a giant pair of scissors, and on and on in a steady stream of items forming an increasingly large pile on the ground.  Finally he found what he was looking for and showed me a hand held device with the words Don’t Panic inscribed in large friendly letters on its cover.  He pushed a few buttons and handed it to me.

The device said, “Washington DC is the administrative center of the United States.  The city is filled with politicians, lobbyists and civil servants.  They are a bunch of bad tempered, bureaucratic, officious, callous, and dreadfully serious jerks who’ll be the first against the wall when the revolution comes.  On no account should you allow them to run your country.”

This was only the beginning.  The spirit showed me a world that, although more advanced technologically, had become chillingly self-important.  Every issue was a cause of utmost gravity.  Lack of seriousness was viewed as a mental illness, to be cured by medication or genetic engineering.

“Oh mirthful spirit,” I said, “Please tell me that it is not too late, that I can still make the deadline.”

“Then let me return to bed.  I promise to write the article first thing in the morning.  And I will honor Towel Day in my heart, and try to keep it all the year.”

Harpo held up one finger and with an eager face, motioned for me to follow.

He honked his horn and nodded enthusiastically.

“Listen, how about you go to the locker room and I go back to bed.”

He shrugged, the world spun and I was snug under my covers.

Not again, I thought.  What more do the spirits want of me.

“Dad,” said a voice, “Dad, there’s water coming out of the water heater and the house is flooding.”

I jumped out of bed and splashed my way to the water heater.  Uttering a string of obscenities, I shut off the water and the gas – then I paused to reflect on what I was doing.  And I let out a loud and hearty laugh.

“Dad’s lost it,” I heard my daughter say to her younger sister.

I continued laughing and set about putting a collection of towels to good use.

This then is my Towel Day blog, reminding you to carry a towel with you everywhere you go tomorrow (May 25th).  If so inclined, take a Towel Day picture and share it on one of the many social sites celebrating the holiday (like towelday.net), or drop in to join the Towel Day discussions.  Or maybe just post a comment here wishing everyone a Happy Towel Day.  But most of all, appreciate the laughs that Douglas Adams gave us and remember to not take life too seriously.

Happy Towel Day, Every One!