Between Game of Thrones and the planned American Gods series, HBO has been drinking deeply from the Nerd Money well. This is, of course, part of that much-discussed wave of geek culture we’ve seen ripple across mass media lo these past ten years: The Big Bang Theory is a mainstream sitcom, Marvel has a culture-shaping cinematic universe in full flower and I definitely saw uber-cosplayer Yaya Han on TBS the other night. But in announcing a Guillermo del Toro-helmed adaptation of Naoki Urasawa’s celebrated Monster series this week, HBO has moved towards the new direction of manga–somber, intense, adult manga. This is a fascinating, unprecedented move–HBO! A TV show, not just a movie! Respected figures in media acknowledging intelligent manga!–one that could potentially bode very, very well for anime and manga fans, and really, nerdy types who enjoy a diversity of entertainment in general. In the spirit of optimism, I offer a list of anime and manga titles ripe for American adaptation, should the Monster series succeed. I am restraining myself from mentioning more overtly niche titles–but know that in my dreams, I yearn to settle in each Thursday night for a lavishly budgeted installment of Quentin Tarantino’s Panty and Stocking. Baby steps! 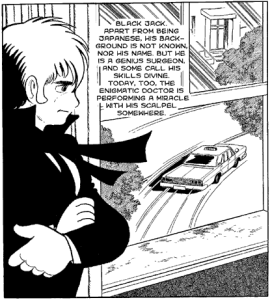 1. Black Jack by Osamu Tezuka
Black Jack is a work that never really made it overseas, despite its success in Japan and the fact that it’s, well, Tezuka. It chronicles the adventures of the titular Black Jack, a brilliant, if arrogant surgeon who lives on the fringes of respectability as he stitches up the sort of desperate types willing to seek treatment from an adamantly unlicensed practitioner. It’s an episodic series that relies on the charisma of its central character to work–luckily, Black Jack has that in spades. He’s ingenious, ruthless, oddly affectionate and more than a little macabre, susceptible to both intense empathy and utter callousness. Though the manga had few recurring characters, the ones that exist are resonant and a dominant narrative could easily be spun around them. Black Jack could be adapted many different ways: as a dark critique of the medical establishment, as the tale of a enigmatic man and the world that spins around him (a la Don Draper), perhaps even as an X-Files-ish horror tale.

2. Red Garden
Red Garden is not, ultimately, very good, but it has a very strong premise: four New York City girls wake up one day to discover a mutual friend was found dead in the woods the previous night. Furthermore  they too were murdered–the bodies they inhabit are borrowed recreations and they have been drafted into a war between two ancient families. The girls are confronted nightly with otherwise normal looking men who have become feral, growling beasts, and are forced to beat them to death with whatever weapons they can get a hold of and some very limited superpowers (namely, being able to jump really high). The reason why the men have devolved this way is related to a lot of poorly thought out mush dumped onto the viewer in the last few episodes, but the girls’ inner lives are the real highlight, from their families to their school activities to the bond that develops between them. Moreover, the contrast between the brutality of their task and the stylish visuals (and outfits) of the anime was bracing. Despite its failings, I’ve never come across another anime quite like Red Garden, and I believe the right writer could shape it into something truly special. It already takes place in the US!

3. Michiko to Hatchin
Michiko to Hatchin isn’t just criminally under appreciated -it is, in my opinion, a stone-cold classic, up there with Cowboy Bebop and Haibane Renmei. It follows ex-con Michiko and orphan Hatchin as they search for Hiroshi, Michiko’s supposedly-dead lover and Hatchin’s father by another woman across a stylized Brazil. Really, it’s about the ersatz mother-daughter relationship that blooms between the two and their self-determination, both together and apart. It’s a gorgeous story in every possible way: the music is lush (Shinichiro Watanabe, director of Bebop and Samurai Champloo was in charge), the animation vibrant, the writing nuanced and thoughtful. The secondary characters are as emotionally potent as our heroines, from the highly-recurring (Atsuko, the policewoman from Michiko’s past) to the one-episode-appearances (Rita, a circus acrobat in a hurry to grow out of girlhood). It’s unique in both its subject matter (women, Brazil, the mother-daughter focus, etc) and its level of quality, and though it would be a risk, it offers the surest promise of reward out of any title on this list–the source material is already a masterpiece.

4. Peepo Choo by Felipe Smith
Peepo Choo is an acerbic, giddily explicit look at Japanese and American pop culture through the lens of Milton, a Japanophilic outcast from Chicago’s South Side who wins a trip to Tokyo. As he is confronted by the fact that Japan isn’t a slick utopia of heaving catgirl bosoms, the elite of a yakuza gang plot to eliminate Morimoto “Rockstar,” a member whose extravagances have spun out of control–especially his hilariously ignorant devotion to American gangster culture. Drawn into this are two schoolgirls, Reiko and Tanaka, a cynical gravure idol and a pint-size otaku respectively, who are mystified, repulsed, and charmed by anime fandom as presented by Milton and within their own borders. It’s a chaotic story to be sure, but a tremendously fun one and though Smith spends a lot of time skewering the excesses of Western anime fandom, he thoughtfully affirms the community it offers. Though some of its geekier detours would have to be toned down or excised, I believe Peepo Choo could be adapted into an incredible satire of Japan-US relations while still drawing in a more mainstream crowd with its wit and verve. 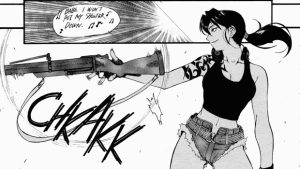 5. Black Lagoon
Black Lagoon follows the Lagoon Company, a shipping outfit of four seamy-underbelly types who operate out of Roanapur, a fictional Thai slum. It’s full of guns, full of explosions, and full of over-the-top personalities: boats slam into helicopters in midair, roomfuls of neo-Nazis are reduced to pulp by a gunwoman on the warpath, eyepatched mother superiors wield golden desert eagles in defense of their gun-smuggling operations. It is gloriously madcap entertainment and it never misses a chance to invoke the sheer power of “Oh my god, that was so badass!“. But what distinguishes it is its heart–never worn on its sleeve but there nonetheless, shading the characters in and taking the story to some unexpected places in its quieter moments. Revy (AKA Revy Two-Hands, real name Rebecca) is the real star of the show, a Chinese-American woman from New York City who is basically an unstoppable angel of death once she has a gun in her hand. Her tragic childhood is invoked, but never banally–an entire episode is devoted to her being taken to task for using it as an excuse for her crueller actions. Similarly engaging is Rock (AKA Rokuro Okajima), a salaryman abandoned by his superiors and now the front office of the Lagoon Company. His relationship with Revy and his slow descent into the madness of Roanapur are affecting enough on their own, but his everyday-Joe-ness grounds the series in a necessary way. It’s also a suprisingly geopolitical anime, with story arcs involving the Soviet war in Afghanistan, Romania under Nicolae Ceaușescu, the Revolutionary Armed Forces of Colombia and CIA operations in Southeast Asia. As it is basically already an American action movie, I see no reason it couldn’t thrive in popularity over here.

My mind is buzzing with further possibilities (Alfonso Cuaron’s Madoka Magica!) but the cross-pollination in effect here is so enormously promising on its own. Certain things will be lost in translation for sure and we’ll have to suffer through a clunker here and there, but this is a new horizon for anime and manga fandom, and for international entertainment in general. We are moving towards a more complex future, full of all kinds of stories from all kinds of places told in a million different ways and I, personally, couldn’t be more excited to see it unfold. The first step is Monster. Who knows what the second will be?