Home Anime/Comics The Young Animators’ Project, and What We Can Hope For

It has recently been brought to my attention that every year, the Japanese government pays a large sum of money to a handful of animation studios so that those studios will each produce a half-hour long piece, animated by their newest animators as a way to showcase rising young talent and give the general public an idea of what can be expected of anime in the years to come.  This project is called Wakate Animētā Ikisei Purojekuto (Young Animator Training Project), and I have had the pleasure of watching three of the four short films that were released in March of this year, as well as several from years past, and I am wholly impressed.  A couple weeks ago, I pined for the future of anime, but looking at the kind of work that can be produced, my spirits are lifted.  We may be having a slump right now, but there’s so much potential out there that it’s really only a matter of time before younger, fresher minds get on the scene, ready to really shake things up.

The first of these animated shorts that I watched was called Little Witch Academia, produced by Trigger, about a young girl named Akko who enrolls in a witch school in order to train to be like her idol, the performing witch Shiny Chariot.  Of course, many of Akko’s classmates – even her two close friends, Lotte and Suushy, believe that Chariot is a charlatan and that she gives real witches a bad name.  But Akko believes in her idol, and wants nothing more than to prove herself despite the fact that she was not born into a witch family and she has no natural magical aptitude.  Because the piece is a half hour long, there are plenty of questions that don’t get answered and relationships that don’t get fully explored.  But Little Witch Academia definitely feels like a pilot for a series, and I can only hope that’s what Trigger decides to do with it.  The characters are endearing (especially my favorite, Suushy, the somber-looking, pink-haired potions expert with a penchant for mischief), and the artwork is vibrant.  Though Little Witch Academia is likely geared toward a shoujo audience, I believe that it could have very wide appeal – especially in the West. It is a very Western-influenced story, which is rare for any fantasy geared toward a Japanese audience. 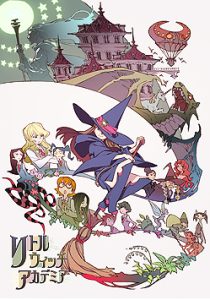 The second of the three shorts that I watched was Death Billiards, produced by Madhouse (Vampire Hunter D: Bloodlust, Trigun, Death Note).  This piece was absolutely beautiful, with a darker palette and spooky vibe.  As the title suggests, both death and a game of pool are involved, but to say too much more would give away the episode, since there is very little other than the premise and the rising suspense.  I really loved Death Billiards, but I don’t think it would succeed as a series, since the payoff of the suspense is more or less given at the end of this initial encounter.  It is an exceptional short piece, definitely intended for a mature audience, which deals with themes of choice, regret, justice – and mortality.  I would love to see more work of this ilk, that seriously confronts the human condition and connects with something beyond the superficial to make us think about our lives.  Many people seem to think only fine literature can do that – but I think there’s a lot of room for that in the much more palatable medium of anime. 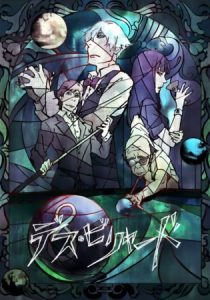 The final piece that I watched (since the last one has not yet been subtitled in English – at least not to my knowledge) was called Aruvu Rezuru – Kikai Shikake no Yōsei-tachi, or Aruvua Rezuru – Mechanical Fairies, produced by Zexcs (Mushi-shi).  Given the title, you can probably surmise that this short is science-fiction!  To be perfectly honest, science-fiction anime isn’t generally my favorite genre, so I didn’t love this one as much as the other two.  However, it definitely has plenty of strong points, and the animation is one of those leading points.  Dark tones are given the forefront here, with the linework being very thin, almost implying physical presences rather than asserting them outright.  In this future world, we are told that there is a way for your consciousness to live entirely in the computer while your body sleeps (almost like The Matrix, except the real world actually exists), so that you can do things like study 24 hours instead of wasting time with normal human functions.  The main character’s sister has decided to try this lifestyle, but a horrible virus has caused her soul, as well as the souls of many others, to be lost!  The beginning of the short is rather exposition-y, but there’s a good deal of action, and I could see how this would fare well as a series. 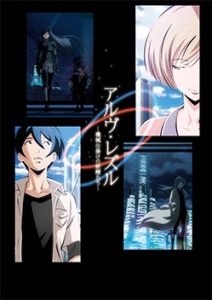 I am very much looking forward to watching the final short, Ryo, when it is available with English subtitles.  It was produced by Gonzo, who has come out with some very successful anime since its founding in 2000.  And if the quality of the former three shorts is anything to go by, it’s going to be an absolute pleasure to watch.  I have no real in on what these four animation studios plan on doing with their talented young animators, but I will continue to hope that they take these folks seriously.  If they do, I think we can all look forward to some really groundbreaking stuff within the next ten years – and I personally hope I don’t have to wait that long for some great new titles!