Home Writing So How Do You Write a Novel in 30 Days?

National Novel Writing Month (more traditionally held in November and known as NaNoWriMo) starts early this year. The idea is simple: you write a 50k novel in thirty days.

It sounds so easy doesn’t it? Just write 1667 words a day for thirty days. This year there are three NaNoWriMos, two ‘summer camps’ (held in April and July) as well as the more traditional November.

Let me tell you, it’s not easy. I’ve been doing NaNoWriMo for several years and it was only last November that I managed to complete the challenge, thanks to a newfound community of like-minded writers and a great Municipal Liaison. The summer camps are harder simply because less people are doing them and who wants to be inside writing on a nice Spring day? Plus, unlike November, you can select your word count, so you could write anything between a few thousand to half a million, if you wanted.

I went for fifty thousand.

I have just under six thousand.

Though I am despondent, I know this is not the end. I can still meet my target if I write a little more each day. That, of course, is easier said than done. The key thing to remember about NaNoWriMo is it’s not about the story, the plot or the characters. It’s about the words. I learned this during November when I ground out fifteen thousand words on the last day, they weren’t my best words but they were enough to hit the target and claim my kudos and winners badge.

It’s all about the mindset. I have the time and yet I find myself procrastinating or wanting to work on any project but the one I’ve assigned myself. I admit, I may have shot myself in the foot by not planning out the storyline in any great detail but sometimes the rigidity of a plan makes the writing even harder. 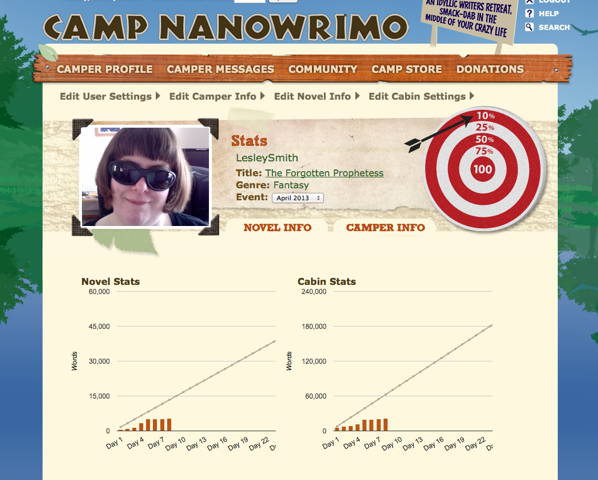 I’m also trying to write fantasy, not my genre of choice, but it does offer me a chance to world build differently, to employ magic, vampires and prophecy in an interesting new way. I’ve sat at my desk, I’ve taken my laptop to Starbucks and I’ve spent bus journeys writing scenes in my head in which a disgraced sellsword becomes the unlikely protector of an eternal child and another little girl finds herself an unlikely priestess after her benefactor is cursed and a city schisms in civil war.

But it’s translating those thoughts, those scenes and getting them down in Scrivener. That’s where I have problems and that is, simply because, I am a procrastinator. I need to knuckle down and do this before I get do far behind that winning is impossible unless someone adds more hours to the day.

Wish me luck, I’ll let you know how I get on in May.