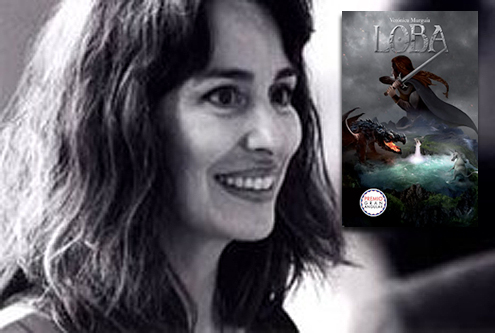 The Mexican writer Verónica Murguía has won the Great Angular SM award with her YA fantasy novel,  LOBA (Wolf). She is the first Mexican to win this Spanish mainstream literature award.

According to the writer, the book took her 10 years to complete. LOBA is an epic novel that analyzes the duality between barbarity and civilisation. The novel is set in the fictional medieval lands of Moriana, Alosna and Tarkán and features a main character, Soledad, who is a not very conventional medieval princess, a

The above was forwarded by Tanya Tynjala

In advance of Tax Day, from Wednesday, April 10 to Monday, April 15, Americans in ten cities across the country will be expressing their frustration with the nearly $100 billion that multinational corporations remove annually from the national budget at the same moment when politicians are slashing essential social services to make up for the ballooning deficit, by playing the new “Tax Evaders” video game projected on the sides of buildings in 10 major cities across the country. Inspired by the iconic “Space Invaders” video game, “Tax Evaders” will allow everyday taxpayers to blast tax-evading corporations near well-known corporate headquarters while overpass light brigades will spell out illuminated messages telling corporations to pay up.

“Why are we even discussing  cuts to social security and other public services before going after the Tax Evaders who are stealing hundreds of billions from our economy?” says Gan Golan, coordinator of the national project. “We don’t need to close schools and hospitals. We need to close tax loopholes for corporations and the very rich.”

In the last week, a number of studies released by Americans for Tax Fairness and US PIRG have shown that wealthy corporations have rigged the game in order to pay less than their fair share of taxes and these coordinated actions represent a growing backlash to the billions held in corporate tax havens and the tens of millions of dollars spent on lobbying by these companies to protect them.

WHO: Projection artists and “light brigades” in 10 cities will be shining a light on corporate tax dodging with local residents becoming  active players in the game.

WHAT: American taxpayers across the country playing a new “Space Invaders”-inspired video game—Tax Evaders—projected onto the sides of buildings in 10 cities. Overpass light brigades will be complementing these actions by spelling out illuminated messages telling corporations to pay up near well-known corporate headquarters.

In the game, the classic Space Invaders have become corporations trying to escape with society’s resources. The player is a crowd of citizens (activated by a Wii controller, or body motion) who blast the evaders and cause revenues to fall back to earth, revitalizing public services.

The game was designed in collaboration with famed game designer, Paolo Pedercini of Molleindustria to bring attention to the issue of corporate tax evasion and allow for the player to shoot Twitter-bombs at the corporations #taxevaders.

WHERE:  Actions to occur in New York, Baltimore, Seattle, New Orleans, Milwaukee, Tampa, Gainesville and Hawaii. The game and more information to be found at www.taxevaders.net.

On Fandom Activism and the Logical High Ground

The Cover with no Cover Art