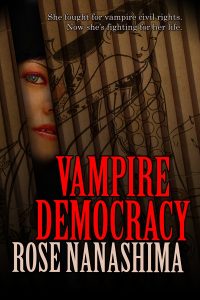 I once wrote a book with a magic system loosely based on onmyodo, the Way of Light and Darkness. Onmyodo is a school of mysticism enabling the practioner, or onmyoji, to cast hideous curses and so forth and potentially achieve immortality. It occupies the same place in Japan the occult does in Anglo-American culture.

I don’t know much about onmyodo–no one does!–but that didn’t stop me. The most fascinating thing about onmyodo is that it can be whatever you want.

The onmyoji is a mysterious, fox-like character. He’s the male equivalent of the witches who had Elizabethan England in such a stir. Like them, his power conforms to no known system; knowledge itself is his secret. He’s the bastard brother of the Shinto priest, high-hatted, wielding a fan that snaps out like teeth. The Shinto priest wrangles the kami–gods–who dwell in the humid hollows of the mountains and underneath the railroad tracks; the onmyoji has a pack of oni–demons–that obey his malevolent will. Both of them likely inherited their powers from their fathers. Just as Tudor-era witchcraft perverted the power of Christianity in the quest for wealth and longevity, onmyodo perverts Shinto ritual in the name of whimsical malice.

That quality of sheer unearthly malice is in the DNA of onmyodo. It is best embodied, for me, in the face of Yasunori Kato as played by Kyūsaku Shimada in the film version of the canonical onmyoji novel Teito Monogatari [Chronicle of the Imperial Capital](1), by Hiroshi Aramata.

Yasunori Kato is a near-immortal disciple of Abe no Seimei, the Dr. Dee, or Paracelsus, of onmyodo. Seimei lived in the Heian period. 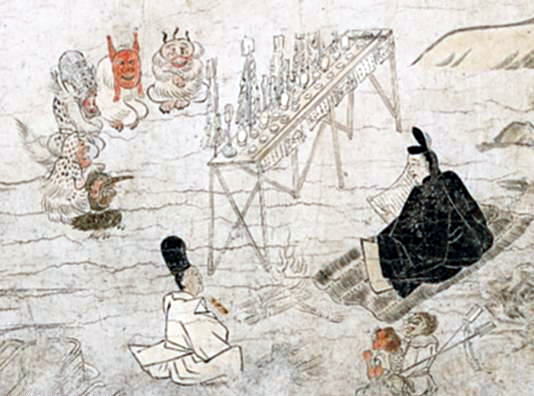 The picture to the right is a jubo meant to cure illness. That’s Abe no Seimei reading a scroll. Behind him are his demon servants, and the five comely charafters on the left are mononoke that inflict disease; Seimei is preparing to cast them out. In his day Seimei was known as a master fortune-teller and welcomed at court. But the modern imagination has transformed him into something more sinister. He’s a cipher like the yin-yang sign, his ambiguous reputation mirroring the unknowability at the heart of onmyodo itself. Like an inverted Roger Bacon, disinterested observers see him as a proto-scientist, while his fans see him as a maestro of black magic.

Why am I harping on these parallels with English witchcraft? Because I think they aren’t pointed out frequently enough. There’s a tendency to see all things Japanese as sui generis, uniquely exotic and fascinating. But the same patterns show up in human affairs everywhere. I often find that a shortcut to understanding Japanese phenomena better is simply to draw a diagonal line, not a straight one, back to my own culture–into our past.

But time moves at different speeds in different cultures and so Abe no Seimei was five hundred years ahead of his European counterparts–but the onmyodo boom that swept through Japan in the eighties, triggered in no small part by Teito no Monogatari, maps onto the European occult craze in the interwar years. This makes perfect sense, because World War II was Japan’s World War I. (I’ll be coming back to this in future posts: it’s so important.) Look at Yasunori Kato again. He’s wearing an Imperial Army uniform.

All cultural phenomena however must obey Savage’s First Law of Cultural Decay(2): Within twenty years or less they degrade into moe products for teenage girls.

This is the cover of a manga by Fumie Soda, an entry in the Manga Grimm’s Tales series(3). The soulful guy in the background is Abe no Seimei. In the immortal words of the man standing behind me at a Marilyn Manson concert when an effeminate roadie got a bit creative with the pre-show mic check: “Gor, he’s changed.”

How did this happen? The same way that Dracula turned into Edward Cullen, obviously–but “it is what it is” never satisfies me as an answer to anything. Matter o’ fact being, there are few expressions I loathe more. So I asked Google and I found this, published in October 2012 by Da Vinci, a fairly respectable magazine.

Why do Girls “Moe” For Onmyoji?

The author starts by listing a handful of “light novels” about onmyoji targeting teenage girls. He (I’m guessing it’s a he) then asks:

Why on earth do girls support the onmyoji sub-genre this enthusiastically?

Well, when you hear onmyoji, everyone thinks of Abe no Seimei. The protagonist of Boy Onmyoji,  Masahiro Abe, is supposed to be the grandson of Abe no Semei. There’s also the legend that Seimei’s mother was a white fox. He’s a mysterious man wrapped in riddles. And as we know, women are attracted to mysterious men. That’s because they want to unmask a guy’s real self and be the only one he can reveal his heart to. Onmyoji stir up that desire.

So far, so much hoary (but not inaccurate) pop psychology. But here’s something that strikes me as insightful:

Also, starting with Abe no Seimei, who was known as “Fox’s Child,” onmyoji give a strong impression of fox-facedness. Cool, aloof, with nothing about them to seize onto, they’re dead ringers for foxes that enchant people. That elusiveness, that detached manipulativeness, is probably the reason they so reliably reel girls in.

Un-PC but bang on, I think.

This business of fox-facedness goes back to Japanese folk phrenology. In folklore, foxes were notorious for enchanting, possessing and tricking people, and people with “foxy” faces were under suspicion of sharing those traits. What is a fox-face? Helpfully, we’re given some examples–see above and right:

Not all that helpful, actually. I can’t see what makes these guys fox-faced, let alone spiritual. Maybe I’m not Japanese enough to feel it. Or maybe I’m just not the target audience for the new school of onmyoji. Give me Yasunori Kato, with his steely-starched cap and his spotless white gloves with Stars of David on the backs, and his long face that gets longer and longer the uglier his intentions.

But at the end of the day, there’s room for both versions of onmyoji. Because onmyodo is whatever you want it to be. Its transformation from a sump of supernatural horror into raw material for moe culture speaks volumes about the thin, thin line between desire and fear.

1.Not available in English, sadly. But the film and the anime and the manga have so many Anglo fans that there’s a Facebook group dedicated to the cause of translating the novel into English.

New Zealand has become a clean, green, and liberal Utopia to a lot of people. For the last thirteen years, I have experienced something very different.

Phoenix Pick Book of the Month