In this week’s viewing: Magical Girl Spec-Ops Asuka tries to cheer up, The Promised Neverland has problems with operational security, and more! 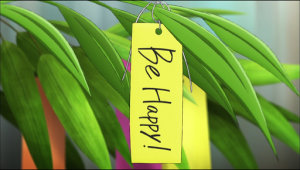 Magical Girl Spec-Ops Asuka #6 – The CIA has identified the mysterious magical victim from Tijuana, and discovered that his brother died in a similar way in Japan. Magical Girl Just Cause is on the case. Reminded that this may lead her to cross paths with her old comrades, she feels completely confident that she can deal with that in a professional manner. This all sets up a huge surprise when… the Japanese magical girls have a perfectly nice Tanabata and are not somehow dragged into fighting alongside her.

Much is made of the fact that the cube victim in Japan is never examined directly, until someone can grab a DNA sample while Just Cause and the terrorist are having their nuanced discussion about the moral dimension of use of force. That plus a reference to a “decoy” make it a dead certainty (no pun intended) that the guy is not actually dead. With connections to Russia and a big pile of money, could this be the secret organizer of the Babel Brigade? And if so, did they absolutely have to play up the Jewish millionaire angle?

By not pulling Asuka into the fight, the story gives her a chance to reflect on what she wants from life. Here’s where the damage from her fighting career becomes the most apparent: she can deal with the daily horrors, but it has destroyed her ability to think beyond the next enemy. The best she can do for now is to reframe her struggle as being for the sake of others. I hope that she is given the chance to do better eventually. 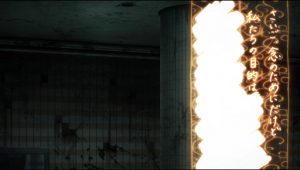 kemurikusa. #6 – Wakaba has met the mysterious Riku, and their shared gift for bringing the best out of the kemurikusa turns out to be a working set of skin sensors. This also explains Wakaba’s mysterious ability to locate the Red Bug hiding in the fog all the way back in episode 1: when he said the fog felt warmer in that direction, it was literally warmer, and the sisters are unable to sense that.

Big revelation #2 is the contents of the orange leaf. It’s not a straightforward manual, but rather the journal of the doomed explorer who preceded Wakaba. As doomed explorers’ journals do, it answers a few questions but raises three times as many. First: who wrote it? Is it Ryoku, who seems to be the only other literate person around? Since the writer seems to have been contemporary with both Riku and the First Person, does that mean Ryoku is not like the sisters?

Second, who erased the crucial information about what the explorer’s sub-selves are supposed to be up to? The text hints that the First Person is up to no good, so perhaps them or someone working for them. And since the sisters are said to have been created by the First Person, that could mean someone close to Wakaba is not to be trusted. 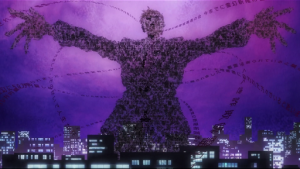 Mob Psycho 100 II #7 – Reigen correctly deduces that the live TV exorcism he’s been called in to observe is a sham, but he fails to realize precisely what kind of sham it is, and who it’s intended to dupe. This leads to a few days of sweet, sweet consequences for his years of fraud, followed by a depressing reminder of how easy it is for a scammer to wriggle out of a scandal. Some gaslighting about “so-called victims”, an old acquaintance rushing in to prop him up again, and he’s right back in business.

Shigeo— no one but Reigen is calling him by his old, demeaning nickname anymore, so I’m going to stop too—really can’t be blamed here. Although it may have just been with an eye to preserving his usefulness as a tool, Reigen has inadvertently done him a lot of good. And after Shigeo admits that he’s been on to Reigen for a while, it’s possible that his return isn’t due to his apparent blind belief in Reigen’s goodness, but from a judgement that Reigen has now suffered enough for his lies. Hopefully this means their relationship has been changed permanently. 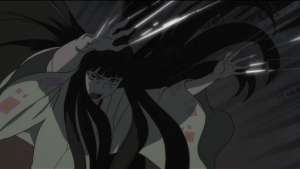 Dororo #7 – When Hyakkimaru and Dororo pursue a monster to a remote village which is suffering inexplicable disappearances, they figure they can solve two problems at once. But the situation is complicated when it turns out that the spider isn’t a monster, and neither is the person helping people escape…

The jorōgumo is a species of orb-weaving spider which Japanese folklore says can turn into a woman who entices men to their doom. It’s often translated as “spider woman”, but the word literally means the type of spider. (Likewise, kitsune is not a “fox spirit” but literally a fox. Please get it right, well-intentioned borrowers of world mythologies.) Like the Western vampire, there is room in the myth for a willing victim who doesn’t have to die, but I think this is the first time I’ve seen this done with a jorōgumo.

This village turns out to be a dead end for Hyakkimaru’s quest, but it does make the point that he isn’t out to slay every nonhuman person he comes across. Where he sees no evil intent, he’s capable of letting them be. 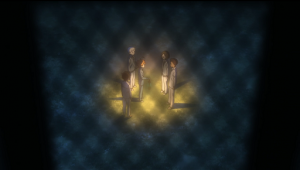 The Promised Neverland #6 – Of course the door is not being opened by Isabella, it’s not time for a full-on confrontation yet. It’s just little Phil, who is becoming quite the significant character despite not knowing anything about the situation. He’s the same kid who notices Morse Code hidden in the bookplates of a bunch of books in the library.

William Minerva, whoever he is, is the outside ally the kids desperately need. Hidden somewhere in those books are bound to be clues that can help them once they make it over the wall.

Meanwhile, Don and Gilda’s adventure leads to nothing other than the revelation that the originators of the plot have not been totally on the level with them. After harsh words are exchanged and Ray gets a well-deserved punch, everyone agrees to be straight with each other so that they can all fully rely on each other.

For maximum stealth, they do this while standing in the middle of a field at night with a light that can be seen for miles. Perhaps luckily, the person who spots them isn’t Isabella but Krone, who seems oddly willing to help. Maybe she’s worked out that an escape by some of the prime livestock is a great way to dislodge Isabella and take over her position.

The Fantasy novel Lost Acre by Andrew Caldecott is a book one might attempt to read as a stand-alone, but it does beg the reader to go all-in and start the trilogy from the beginning.