On February 12th, I was riding the elevator up to the office when a coworker said, “So, are you a big fan of Benedict the 16th?”

“What do you think?”

This is what comes of not having a television.

I logged onto my computer and inhaled the news. Then locked myself in the bathroom and cried.

Is it wrong to feel abandoned and even a bit betrayed? It’s selfish, oh yeah. But I keep thinking about Gandalf on the Bridge of Khazad-Dum.

Something was coming up behind them. What it was could not be seen: it was like a great shadow, in the middle of which was a dark form, of man-shape maybe, but greater; and a power and terror seemed to be in it and go before it.

“Over the bridge!” cried Gandalf, recalling his strength. “Fly! This is far beyond any of you. I must hold the narrow way. Fly!”

I have a feeling that Benedict XVI is not retiring to live out his days in peace with his books and his piano. He’s going to hold the narrow way. What is coming up behind us we haven’t yet seen, but we can all supply our own names for it. Lightning struck the dome of St. Peter’s on the day of the announcement. In an earlier age this might have been seen as the wrath of God. We 21st-century babies know that God is neither in the wind, nor in the earthquake, nor in the fire. What that bolt of lightning means for us is, I think, much scarier.

I’m not a TEOTWAWKI fangirl. (We only have one 10-kilo sack of rice in the closet!) But having lived through the Japanese earthquake of March 11th 2011, I do have, let’s say, a better understanding of how suddenly things can come to an end. (“But of that day and hour knoweth no man, no, not the angels of heaven…”) And this brings me to …

“Honey, don’t you think we should maybe buy a baseball bat?”

This glabjous gent and his crestfallen companion are cavorting at World Zombie Day in Detroit. Did you know there was a World Zombie Day? I didn’t. (I know. This is what comes of not having a television.) It stands to reason it would happen in Detroit. But there are also World Zombie Days in London, Seattle, Pittsburgh, and probably a city near you. Just follow the trail of cast-aside high heels.

The organizers of World Zombie Day London have some surreal advice for aspiring zombies:

1. You are not to touch anyone.

2. Do not attempt to scare anyone who is not a willing participant. Avoid confrontations!

3. If your walk is anywhere near streets or roadways, stay on the pavement unless crossing the street. Blocking traffic is a crime and anyone doing so could be arrested.

5. No littering, destruction of property, or any other illegal activity. Let’s put on a good show.

6. Keep in mind you might be asked for a picture ID at the pubs and your zombie face might not match your picture ID. If you are refused entry, please understand the doorman is only doing his job.

7. Please do not attempt to push your way into any business if you are not welcome. (sic throughout)

What’s going on here? Living people pretending to be dead people to attract attention, that’s what. Aren’t there enough dead people in the world? Guess not!

In World War Z, progenitor of the zombie boom, the protagonists were brave survivors. In the TV show The Walking Dead, a fan-fave character has a zombie child. What’s next? My Alpha Zombie?  Let the Right Zombie In? Diary of a Teenage Zombie? Zombie Pet Shop? Oh, whoops, that last one is an upcoming animated feature film.

There are already zombie babies. Says Bean Shanine, zombie baby artist, “Most kids these days think zombies are awesome!” She’s a mother of four herself. 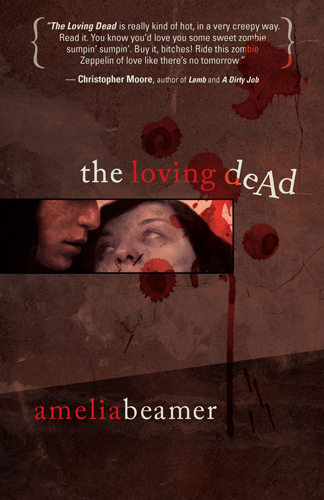 Amelia Beamer’s The Loving Dead, a recent and very readable entry in the chronicles of shambling, has an interesting take on the concept of zombie virus transmission: It’s a sexual disease. This sets up a fascinating tension within the novel. The protagonists are promiscuous West Coast hipsters, down with homosexuality, bisexuality, pretty much any sexuality. Clues in the text suggest that the author endorses their libertinism. But the rules of the story world — also, of course, endorsed by the author — condemn it with a vigor not seen even in Leviticus. Three thousand years ago you might’ve been stoned for sleeping around. Now you turn gray and eat your best friend’s entrails!

The truth, of course, is there are a lot of people out there who want to be zombies. Whacking on the old zipper face and ketchup isn’t just revelry, it’s revelation. Look, we’re dead! Do you care now? I’m eating a baby. Do you care now?

The invaluable Spengler wrote an essay about zombies last year. I’m going to quote here at length, but the whole thing is eminently worth your time. After discussing Jewish and Christian concepts of bodily resurrection and incorruptibility, he notes:

How quaint, how superstitious these ancient notions of eternal life seem to the secular modern world, and how strange and primitive the rituals which sustained the Psalmist’s conviction that God would not abandon his servants to the grave. Modernity tells that nothing in the universe cares whether we exist or not, and where the meaning of our lives is concerned, we are all on our own.

We think of ourselves as rational folk. And yet we find almost 10 million pairs of eyes glued to the television screen each week when a new episode airs of “The Walking Dead,” enthralled by the same images, but in reverse: the walking dead in place of the dead awaiting resurrection, animated corpses instead of wholesome priests or uncorrupted saints, a terrified band of survivors huddled against encroaching death instead of the happy procession of God’s people to the source of eternal life.

Your humble fantasy and sci-fi columnist can’t begin to approach Spengler’s erudition, but I do find myself wishing he had taken up the question that’s eating me now (ha, ha, clunk). I grok that fighting zombies could be fun (God help me), but impersonating them? What is it in the water(1) that’s impelling people to pretend to be dead?

With a terrible cry the Balrog fell forward, and its shadow plunged down and vanished. But even as it fell it swung its whip, and the thongs lashed and curled about the wizard’s knees, dragging hi to the brink. He staggered and fell, grasped vainly at the stone, and slid into the abyss. “Fly, you fools!” he cried, and was gone.

Gandalf’s companions mourned him and then went on with their journey. If they had been contemporary Americans(2), they would first have Tweeted the event and then sat around in despair until they were slaughtered by orcs.

“Honey? I know Japan has the strictest gun control laws in the industrialized world, but isn’t there some way we could get hold of a shotgun?”

“Live fast, die young, and leave a beautiful corpse,” said James Dean. That’s so 20th-century. It was all right to die then, maybe even beautiful, because in the back of our minds we still believed in the resurrection of the body and the life everlasting. We’re over that pernicious meme now. We know that even Young Werther decayed in the grave to adipocere and bones. Isn’t it preferable by far, then, to get up out of that grave and start shambling?

Go back home and eat them all.

“Honey? Now that I think about it, we really ought to have a rocket grenade launcher.”

Papa Benedict, pray for us!

1. Japan being the exception that proves the rule, as usual. Whatever else may be in the Japanese water, zombiphilia is not. The things are barely on the cultural radar here.

3. Fill in your own nationality. If they were Japanese, however, I tend to think they would have persevered. But in the end Frodo would have committed suicide by jumping into the Cracks of Doom with the Ring. Meanwhile, Aragorn would have died in battle, as would everyone else except Merry, who would have returned to the Shire and improved everyone’s lives by bringing back Mordor’s smelting technology. Sam would have survived through some unlikely quirk of fate and gone to live in Lothlorien and write haiku.

Science Fiction culture is making its way onto the late show talk circuit.