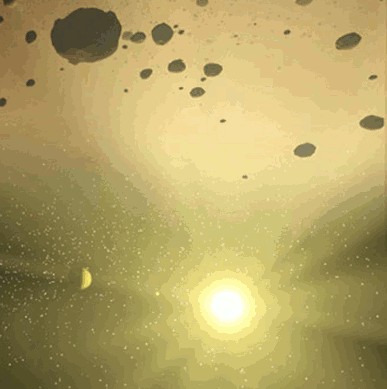 This is a blog about rockets and science and rocket scientists.  I’ve spent my career in this field, working among the people who make some very, very cool things happen there. I’ll discuss cutting edge discoveries in astronomy and cosmology and other sciences, and noteworthy new information about spacecraft and space travel. Where I can, I’ll offer an opinion on what it might mean for you and me. And from time to time I’ll wander off the path a little, maybe to serve up some tidbit or gossip as an insider on projects like NASA’s Apollo Moon Landing and Space Shuttle Programs.  My intent is not to post lectures but to host a discussion among dedicated Amazing readers. I’ll cover topics that interest you: anything from private sector space programs, to the influence of science fiction on science, to recent discoveries about Mars, or even to revisit Pluto’s demotion.  Just let me know.

John Aaron is one of those distinctively remarkable NASA professionals who were central to the success of this nation’s adventure into space, and he is also one of my career heroes.  I met him in 1981 when he was NASA’s Chief of the Space Software Division at the Johnson Space Center in Houston, Texas and later was NASA project manager for the International Space Station.  But during the Apollo Moon Program he was a Flight Controller in the Mission Control Room at NASA’s Manned Spacecraft Center (as it was called then).

John’s responsibility was the electrical, environmental and communications systems on the spacecraft, a Controller position known as EECOM.  His was one of twelve Flight Controller positions, each responsible for the performance a specific subsystem during a space flight.

The Flight Controller team in turn reported to an Apollo Flight Director who had overall responsibility for managing the safe and successful completion of the mission.  The Flight Control teams trained for hundreds of hours preparing for an Apollo mission, and each member of the team was selected from the best of the best of those qualified.  The success of an Apollo mission depended on each controller’s competence, training, teamwork, and most importantly, ability to react well under pressure.

Anyone who watched Ron Howard’s 1995 movie “Apollo 13” saw a dramatic, and accurate, portrayal of that team’s work in crisis mode.  In fact, in that film John Aaron was portrayed by a young actor named Loren Dean; he was the one who worked with astronaut Ken Mattingly to conserve the limited power on board the spacecraft.

However John played a much larger roll on the Apollo 12 mission, though his accomplishments that time are not as widely known.  Rather than belabor you with “telling” instead of “showing”, I’ve included a link to a YouTube video that lets you see for yourself.  It’s a clip from a 2003 History Channel documentary called “Failure Is Not An Option” (which unfortunately is now hard to find).  Go watch the clip and then come back here.  I’ll have a couple of final insights about John.

Pretty Amazing, huh?  To put John’s heroics in even brighter light, just 59 seconds elapsed from the loss of power report on the spacecraft until John made his “SCE to Aux” call.  And he had only 90 seconds remaining before he would have to abort the mission and blow up the Saturn V rocket.  Because of his cool-headed performance under this incredible pressure, John’s teammates nicknamed him the “Steely-eyed Missile Man”.

There had never been a launch abort during the Apollo program, and though there was an option to separate the Command Module carrying the crew and parachute them into the nearby Atlantic, it was extremely risky and might have seriously or even fatally injured the astronauts. Also, you can see the rising concern on the faces of the other Flight Controllers.  No one knew what to do.  And no one except John knew how the SCE switch worked and figured out that it could restore power.  (Though not designed for this use, it basically acted as a circuits reset switch here).  Yet the training and discipline of these professionals led them to trust the teammate in charge of this, and they did.

One more thought.  John Aaron not only saved Apollo 12, he saved the rest of the Apollo missions.  Short attention spans aren’t unique to the current generation.  The previous lunar landing, Apollo 11, had allowed Neal Armstrong to become the first human to walk on the Moon, and when that spacecraft returned safely to earth, John F. Kennedy’s challenge to the nation had been fulfilled. Public interest in the program dropped off a cliff, and the TV coverage with it.  Congress immediately cut back funding for the program; the company where I worked handed out lay-off notices even before Apollo 11 splashed down.  Had Apollo 12 been aborted, the remainder of the program would have been cancelled and the flights of Apollo 13, 14, 15, 16 and 17 would be only a lost dream.

Does this research include avoiding O’Leary’s Cow Syndrome (the propensity to kick over flaming lanterns in straw-filled barns?)