The John Carter Files website ran a very nice tribute to Edgar Rice Burroughs on the anniversary of his death yesterday. 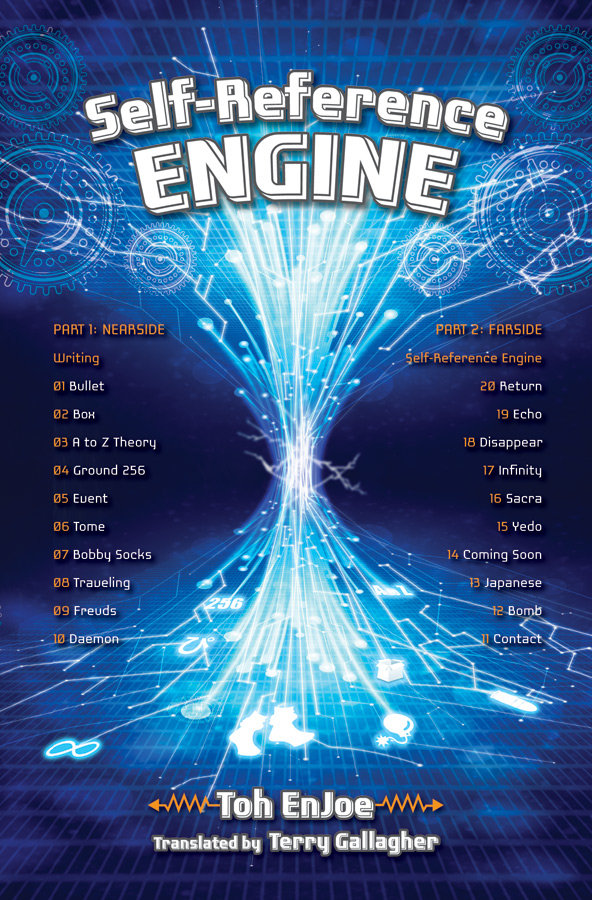 THIS IS NOT A NOVEL.

THIS IS NOT A SHORT STORY COLLECTION.

THIS IS SELF-REFERENCE ENGINE

SELF-REFERENCE ENGINE is available now and carries an MSRP of $14.99 U.S. / $16.99 CAN. An eBook edition is also available for the Amazon Kindle, Apple’s iBooks Store, the Barnes & Noble’s Nook Books Store, and the Sony Reader™ Store.

This is not a novel. This is not a short story collection. This is Self-Reference ENGINE. Instructions for Use: Read chapters in order. Contemplate the dreams of twenty-two dead Freuds. Note your position in space-time at all times (and spaces). Keep an eye out for a talking bobby sock named Bobby Socks. Beware the star-man Alpha Centauri. Remember that the chapter entitled “Japanese” is translated from the Japanese, but should be read in Japanese. Warning: if reading this book on the back of a catfish statue, the text may vanish at any moment, and you may forget that it ever existed. From the mind of Toh EnJoe comes Self-Reference ENGINE, a textual machine that combines the rigor of Stanislaw Lem with the imagination of Jorge Luis Borges. Do not operate heavy machinery for one hour after reading.

“Self-Reference ENGINE is unlike any typical science fiction novel,” sayseditor Nick Mamatas. “On one level, this is an astounding work of hard science fiction by a brilliant author with a PhD in physics. But it’s also extremely rich with literary allusion. If you’re a reader interested in how the fundamental laws of physics and the space-time continuum can be bent or even broken, or are prone to liking everything from the meta self-referential aspects of Mystery Science Theatre 3000 to avant-garde postmodernism, SELF-REFERENCE ENGINE is a must-read!”

Author Toh EnJoe was born in Hokkaido, Japan in 1972. After completing a PhD at the University of Tokyo, he became a researcher in theoretical physics. In 2007 he won the Literary World Newcomer’s Prize with “Of the Baseball.” That same year also saw the publication of his book, Self-Reference ENGINE, which caused a sensation in science fiction literary circles and was ranked #2 on SF Magazine’s list of the best science fiction of the year. Since then, EnJoe has been one of those rare writers comfortable working in both “pure literature” and science fiction. In 2010 his novel, U Yu Shi Tan, won the Noma Prize for new authors. In 2011 his “This Is a Pen” was nominated for the Akutagawa Prize, and he won Waseda University’s Tsubouchi Shouyou Prize. In January 2012, he won the Akutagawa Prize with “Butterflies of a Harlequin.” His other works include Boy’s Surface and About Goto.

For more information and to read an excerpt of Self-Reference ENGINE, please visit the dedicated website at http://www.haikasoru.com/self-reference-engine.

For more information on Haikasoru and other titles available from the imprint, please visit the website at Haikasoru.com.

The Architects of the Future