So here’s how this works: Every week, I commentate on the latest episodes of various anime series, and then we all discuss further in the comments!

Then in April, From the New World will end and a whole crop of new shows will start, of which one or two may be added to the regular commentary posts. I’ll be posting a quick preview of the more notable upcoming shows in a couple weeks. 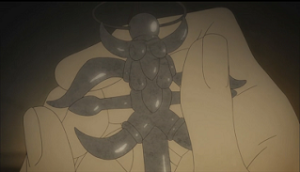 From the New World #23 – It’s down to Saki’s choice now: unleash the plague, or find some way to persuade the Ogre child that killing other humans is wrong?

Although it seems moot at the moment, as Shun reappears, looking awfully grown-up and healthy for someone was supposed to have died twelve years ago at the age of fourteen. Is that a hallucination, or the mental fragment of him that she carries simply getting stronger? Or was his apparent dispersal into the lake long ago not really death?

Just at the end of the previous segment of the story, when Saki and her friends were fourteen, Satoru brought up the mystery of why psychic powers reappeared when they did, and what the ultimate source of the powers is. Whatever happened to Shun, I’d guess, is tied up with the answer to that question.

The other big question left to answer is, what’s Kiroumaru’s agenda? If he came to the ruins of Tokyo looking for the superweapon before, who was he planning to use it on– the rival Monster Rats, or did he want to take out their “gods” himself? 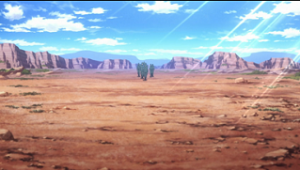 Space Brothers #48 – A point in Vince’s favor at last. He may be a jerk, but at least he’s determined to be a gender-neutral jerk.

Though this series hardly needs a villain when Mutta is so willing to be his own worst enemy. Just when he’s finally living his dream, one hint of an unpleasant premonition is all he needs to start tying himself in mental knots again.

Hunter x Hunter #70 – I just said this story was in out-and-out geek mode right now, and here’s a perfect example: A game of dodgeball. Simple rules. And then the author starts thinking about how to complicate it. What if the players are so strong that the ball gets punched into the ceiling and stuck there? Is teleporting one of your opponents legal? Throwing your teammate to keep the ball from hitting the floor? If one player is merely a construct maintained by the will of another, and it vanishes because its controller loses consciousness, can the construct return to the game when the controller is awake enough to recreate it?

But it all comes down to a classic shōnen confrontation– Gon and his remaining allies and the chief opponent are the only ones left on the field, everyone already injured (except for Bisky, who seems to be content to sandbag and let her pupils have the chance to figure it out). Can our hero muster one more unbelievable effort to pull off the improbable win? Well, yeah. Not much suspense there. But what’s that flashback in the preview showing Razor and his father all about?