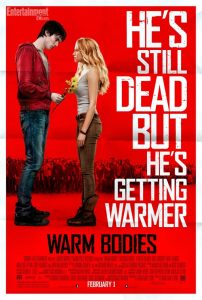 With zombie rom-com Warm Bodies opening to strong reviews and good box-office last week zombies have moved out of the horror ghetto into the PG13 friendly mainstream. This is a remarkable development, but what is going on? 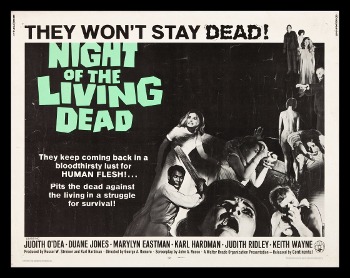 The modern zombie was first sighted in 1968, in George A. Romero’s now classic Night of the Living Dead. Before that zombies were solitary products of voodoo inhabiting rare films such as Val Lewton’s I Walked With A Zombie (1943). Post Romero, hordes of zombies ate your brains wholesale. But Night of the Living Dead was still a single film. It didn’t immediately inspire imitators or sequels. A decade later Romero made Dawn of the Dead (1978) and a small wave of imitators began to crawl out of the grave. Most of these were Italian, most notoriously Zombie Flesh Eaters (Zombi 2) (1979), and they were followed by another Romero sequel, Day of the Dead (1985), which was almost immediately spoofed by Dan O’Bannon’s Return of the Living Dead (1985). Once the spoofing starts it’s a good sign a genre is dead and ready for burial. And indeed, for a long time the odd zombie film which did get made generally dragged its putrid corpse straight to video, unnoticed by all but the most enthusiastic genre addicts.

There was good reason for this. While different settings, eras, characters and mythologies provide for endless different possibilities for a vampire or werewolf story – can anything be as far from Dracula as Twilight? – all zombies stories are essentially the same. Zombies take over the earth and a handful of characters gradually lose the struggle to survive. How many times can you watch that before getting bored? What variations are possible? The story can be played straight for terror or thrills, or more knowingly for laughs. The budget or author determines whether the story covers the big picture – World War Z – or focuses on a single location – Dead Set. But basically its all the same. An endless round of sieges, chases, battles and bloody deaths, with moments of respite for comedy, character development and/or soap-operatics. 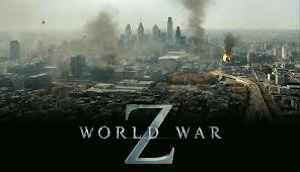 Yet now the zombie stories have taken over the world. Romero has made three more zombie films. Land of, Diary of and Survival of the Dead. The Walking Dead comic strip has become a hugely successful TV series. World War Z is about to hit the big screen with a summer blockbuster budget and a genuine Hollywood superstar, Brad Pitt. There is an entire sub-genre of zombie fiction publishing, from dedicated imprints like Severed Press, who specialise in apocalyptic fiction, most of it involving zombies, to high-profile novels such as Tim Lebbon’s Coldbrook, to the lit-mashup Pride and Prejudice and Zombies. The latter so successful as to inspire a whole other sub-genre of lit-romance-horror rewrites from Sense and Sensibility and Sea Monsters to Jane Slayre: The Literary Classic with a Bloodsucking Twist. A trend which will presumably reach its climax with a mashup of Twilight and 50 Shades of Grey Zombies.

I’m not even joking. Currently available on Amazon is a book called Zombie Erotica (trust me, don’t look it up, the Amazon blurb is genuinely nauseating and indicates a very sick piece of work), while another anthology called Love, Lust and Zombies is due for publication this fall.

What is going on? Forty years ago the idea of zombie fiction as a genre would have been considered ludicrous. But here we are. Could it be that zombies are the ultimate horror symbol for an unbelieving and fearful age? For many we no longer go to heaven (or hell) or come back as a ghost, so perhaps returning as a walking corpse, simply chemicals and meat, all spiritual and religious considerations neatly sidestepped, makes more sense? Could the very physical zombie be the perfect atheistic horror to address the fear of death and decay, with all the disgust and dread but none of the metaphysical terror or doubt?

And there are wider, less personal concerns. There is a prevalent fear held by many in the Western world that things are falling apart. In Europe the nightmare is of economic decay and endless recession. In America there is the right wing fear of socialism or Islam bringing the American Way tumbling down into anarchy and godlessness. Throughout the West there is a general malaise, a fear that the future is not going to be as good as the past, of loss of control, that the new millennium belongs to more vibrant societies such as China, India and Brazil.

How better to dramatise those Western fears than with the walking undead? Is it any coincidence that the zombies have risen post 9/11, just as the Western world faces a crisis of confidence, empire and power? When so many perceive the world they knew as tumbling into the ruins, zombies make the perfect metaphor.

(Wikipedia has an extensive listing of Zombie films – Ed.)

A discussion of women in SF and their progress or lack thereof over the course of the past half-century.