Yesterday the Huffington Post published a map prepared by Javier de la Torre from CartoDB that illustrated every single known meteorite impact on the Earth since the year 2300 BC (4,313 years of meteorite impacts). 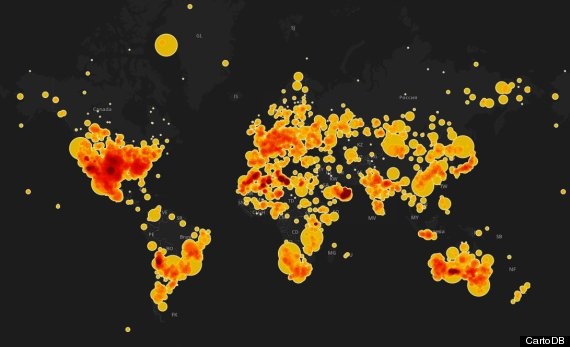 Look closely.  There is not one single inch of the land surface of our planet that hasn’t received the kiss of death from space.

Now here’s another map, that of the Soviet Union’s (look it up) estimated primary, secondary and tertiary nuclear strike targets in the US during the Cold War (look that up too):

In 1983 then President Ronald Reagan proposed the Strategic Defense Initiative – ‘Star Wars’ – designed to create an impenetrable shield over the United States that would prevent Soviet ICBM’s from reaching our soil. (Well, air-bursts actually, along with some nasty sea floor detonations along the east coast – but that’s a different story.)

According to a CBO Report, our government was prepared to spend somewhere in the neighborhood of 15 billions dollars over a five year period – three billion dollars a year (in dollars unadjusted for inflation; it would be closer to 30 billion in today’s dollars) for what essentially amounted to basic research into energy weapons, missile (and other) delivery systems, sensor systems & etc et al, the purpose of which was to detect and destroy ballistic missiles.

Look at those two maps again. Admittedly there is a bit of a difference in time scale (Cold War generally lasting roughly 50 years, meteorite impacts a span of over 4,000 years) but still…which one appears to represent the greater threat?

According to NASA’s budget, a mere 7.8 million was spent in 2012 on NEO (Near Earth Object) detection and only slightly more – 20.5 million – is to be requested each year for the next four years.  Last year’s John Carter film was budgeted at $250 million – ten years of the proposed NASA budget – if that helps put things in perspective for you.

The threat of global nuclear war has diminished greatly over the years, North Korea, Iran and Islamo-terrorists notwithstanding.  The threat from meteorite impact has remained pretty constant.  A limited nuclear exchange or a coordinated state-sponsored terrorist nuclear attack is survivable (speaking in terms of the species).  A single meteorite strike might not be.  And just one more point:  a nuclear incident has a relatively low probability of occurring while multiple meteorite strikes are a statistical certainty.

Something about this tells me that our priorities are just a bit skewed when it comes to dollars spent on existential threats to life, liberty and the pursuit of happiness.  We need to prioritize our “early warning system” (NASA NEO Watch) and start getting serious about a new SDI, the development of “weapons” designed to seek out and divert rocks that are headed our way.  Maybe if we rename the whole thing Space Wars, open up a new office at the Pentagon (UFO/Shadow or something like that) and start referring to asteroids as ROCK MONSTERS FROM SPACE!!! – They want our women! – we might get a little traction.

Let’s see if we can throw a ball into space so it stays in orbit, and attach some radio antennae!

A brief report on the happenings st Smofcon 35