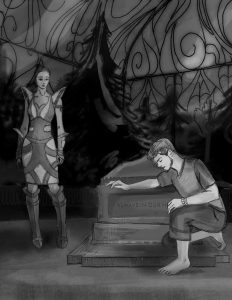 Bobby listened to Lucretia Adams’s big Mars-adapted boots stomp on the knotty pine veranda decking. With each step it sounded as if she would crash through.

“Do you understand your position here, Mr. Wallace?”

“I understand.” Bobby leaned against the veranda railing. When he’d seen her heading up the access road in her jackrabbit-fast Dodge, he’d known what was coming.

“I can’t force you to leave, but I must advise you of the consequences if you choose to stay.”

Bobby stared over the trees. This high in the atmosphere – Tharsis Montes bulged even without the mountains – he sometimes felt he could see the curvature of the planet. She stretched away all vermilions and emeralds and shades of royal blue. Hazy at the horizon. Black right above.

He kept a clear wedge of wildflowers and lawn open, so he could always view the world from the cabin. Few people enjoyed such vistas every day.

“Are you even listening?” she said.

Lucretia Adams, Bobby figured, was probably about ten years, standard, his senior. She was tall, over six feet, so she looked down on him. Long dark hair, tied in a knot at the back of her head. Darker skin than he was used to.

Her arrival was a distraction. He had some Oregon seedlings to get into regenerated soil ready for shipping, and some pohutukawa cuttings to propagate. There was a gamey transmitter out in the swales that needed replacing.

Maybe all that was moot, but he wasn’t leaving. He needed to be occupied.

“The comet’s name was Clarice,” Lucretia said. “Old bot knocked her into collision trajectory. Nobody realized until it was too late. “

“Just because I live up here, it doesn’t mean I don’t stay up to date.”

Standing at the veranda’s painted railing, Lucretia waved out at the trees. “You have a nice view.”

Some of the trees were old growth. Original plantings of redwood and radiata pine. The hardy radiatas grew faster. Some places foresters harvested every fifteen years. A clean swath of felling machines and pulp engines that turned mature trees into carbohydrate sludge to feed the off-world stations.

Bobby didn’t say anything. In less than a week, all of this would likely be a blast zone. The trees reduced to blackened stumps – at best – the land returned to its pre-airformed blank barren emptiness.

Lucretia turned to him. “Your parents built this cabin? Farther above sea level in those days.”

“Great, great grandparents. How many people are you warning?”

“A couple of hundred. I’m surprised by the density out here.”

“Calder?” The village fifteen klicks to the southeast probably accounted for most of that number. Miners and lumberworkers, mainly. Bobby didn’t imagine any of them leaving willingly. Plenty of demand for miners in the belt or the moons of Jupiter. Another five years and Saturn’s moons would be opening up too.

“What’s the blast radius?” he said.

It had been a long time since any comet fragments had impacted the Martian surface. Airforming had involved thousands, but the Kuiperbots broke them all down to half-meter size before firing them into Mars’s atmosphere.

“Huh,” Bobby said. He’d read all that already. A whole lot of pluses and minuses in there. As the fragment closed, the projections got better. As did the probable impact point.

“You know there’s a compensation package?” Lucretia rubbed an eyebrow with a lanky index finger. “Could I get a glass of water, maybe?”

Bobby shifted one of the deck chairs, its legs scraping. “Come take a walk.”

“You haven’t been up here before, have you? Always been down at Bradbury?” Mars’s second biggest city seemed to him a trap. City amenities with city problems.

As he pushed open the cabin’s door, Lucretia said, “I’m from Earth.”

Bobby stopped. He looked her over. “How about that?” he said. “I’ll get you that water.”

In the kitchen the oven had prepared a chicken teriyaki. The old appliance’s display flickered. Bobby drew a beaker from the faucet.

Lucretia stood in the doorway. “Rustic,” she said.

“I like it.” Looking around he had a momentary glimpse of how his home appeared to a visitor. Ancient rocking chair, quilted rug over the back of the sofa, Penny’s ragdoll on the mantle, old dimmer windows and a Samsung info-curve that was twenty years old. It still got up to date feeds. Its display currently showed some robins and lorikeets pecking at a tray of seeds.

Did she think he was a hick? What was the word? Redneck? Hillbilly? That was the one. The Hillbilly of Tharsis Montes.

“That’s on the flows?” Lucretia said with a nod at the curve.

The old curve, nailed into the left corner of the room had a few grainy pixel regions. On either side it held streams of data from the flows. From all over Mars and the outer system. He wondered if she noticed that he had a ticker with the countdown on the projected impact of Clarice’s remains. A twentieth of her original size, she would still pack some wallop.

“The birds?” Bobby said. The video dominated the curve’s center.

“Is that old Earth?”

“Live. A feeder at the plot.” He handed her the beaker of water.

Lucretia took a swallow and followed him out across the veranda, clomping noisily. Bobby went around the Dodge’s still cooling hood – he could feel the heat rolling off it – and along between the rows of raggedy hydrangeas into the trees. A willy-wagtail darted after him, plucking invisible bugs from the air.

“Pollen,” he told her. “Humus, insect pheromones, animal feces. Lots of stuff.” The path pushed through ferns and saplings. Some of the pines rose more than fifty meters here.

Once all this had been barren almost airless desert. Before the Kuiperbots had gone out to the belt and pounded the fourth planet with enough icy debris to build oceans and atmosphere, Mars had been virtually dead.

Ten generations before he’d been born.

Among the tall, straight-trunked evergreens, Bobby felt at home. He’d grown up here and knew this would also be his final resting place. As it was for so many others.

Lucretia’s eyes were turned upward, looking at the wan sun. “These trees are so big. Mars gets less than half the sunlight of Earth. It seems miraculous.”

“Perhaps.” Bobby reached and plucked some needles from a low-hanging branch. “Clever genetics around the time airforming first began. These pines are designed to thrive in a much lower density atmosphere than even here. They love how thick it’s gotten.” He handed her the needle cluster.

Lucretia rubbed them in her fingers. “So soft.”

“Their forebears had brittle needles. And they shed their lower leaves. These are still photosynthesizing even in the murk down here. Very efficient.”

“Why are you showing me this?”

“So you can know what it is before it’s all gone.”

“You think I don’t know? I’m versed in the Martian biosphere. Ganymede and Io. Ceres and Pallas too. Even the plans for Triton.”

Bobby smiled at her. She returned a quizzical frown.

“How much sunlight does Triton receive?” He turned away from her with a wave. “No, don’t worry. Come see the birds.”

Bobby led her on down the trail. The willy-wagtail followed, twittering at them. The needle litter shushed underfoot.

Lucretia didn’t speak. She held her hand out to the bird.

Bobby grabbed a needle-laden branch and shook. A cluster of tiny gnats and skeeters clouded. The bird fell silent, diving into the cloud, beak snapping.

Another fifty meters along, he turned into a short side path. A decade ago he’d repaired the wooden retaining steps. Some of the stakes had bent, letting soil trickle around. Bobby wouldn’t be redigging and repairing. Obliteration hung imminent.

He stopped at the cast iron gate.

On the feeder table the robins and lorikeets kept pecking, oblivious.

“What’s this?” Lucretia said, looking over the headstones.

If he told her that they were all memorials, she would believe him. The documentation recorded their ashes as interred at Bradbury.

Six generations of his family. From Earle Sykes, one of the first to live this high, in those twenty-second century colonial times, to Penny Sinclair. Bobby’s three year old daughter.

He pushed the gate open.

“This is a bioswale,” Bobby told Lucretia. “Since the beginning. They’re buried shallow. They add to the biomass.”

Bobby shook his head. He stopped in front of Penny’s stone. A piece of hard Martian basalt taken from Olympus Mons.

Always in our hearts the inscription read.

“A human body is what, seventy kilograms of mass? The Martian crust is measured in cubic kilometers. How could that make any diff –”

“It makes a difference to us.” Penny had been eleven kilograms. Weak and sickly. An aggressive cancer. It would have taken anyone.

The slope below the graveyard swale bloomed with more wildflowers and lupins and brilliant flaxy grasses than anywhere on the whole Tharsis Montes.

“This is why you want to stay?” Lucretia said.

“I was waiting for you.”

Tears now. Bobby felt his arms tremble. His whole body. “It’s hard to say goodbye. Even after all this time.”

“You’re breaking the law. You can’t bury people on your own property. There are –”

“Please,” he said. “I know the law. But how can your compensation package compensate for this?”

Lucretia looked down as he pointed. “Penny?” she said, reading the stone.

“Yes. I read your dossier.”

“I’m sorry you lost her. And her mother.”

Lucretia didn’t say anything. She stepped around Penny’s grave. Looked at the others. Earle, Sandrine, Cooper, Yvette. The rest.

Bobby put a trembling hand on Penny’s headstone. It was like he could feel electricity through it.

“You know,” she said, “if that piece of comet does hit here, they’ll be vaporized.”

Lucretia turned swiftly. “I mean in a good way. More than simply your bioswale here, they will add their… nutrients to the whole of Mars. Even with the kind of megaton explosion we expect, nothing will leave the atmosphere.”

Bobby frowned, but it changed to an almost-grin as he realized. “Like a planet-wide swale, huh?”

“You won’t have a place to visit, but I don’t want you to stay here.”

Lucretia touched his shoulder. “Of course. I’ll see you at the cabin.

Lucretia smiled and went off through the gate. The willy-wagtail followed, twittering. Lucretia grabbed and shook a branch.

Bobby knelt at Penny’s grave. He stared at her name in the engraving.

“All right, honey,” he whispered. “Looks like you might have a new and much bigger job coming up.” He let himself cry. Let himself shake.

Goodbye felt almost as difficult as the first time.

A half hour later, he found Lucretia waiting in the Dodge.

“Sure. Don’t you want to grab your stuff?”

“Got everything I need.”

The vehicle’s engine started. “Do you want to watch the impact from orbit?”

Bobby didn’t know if he could handle that. “Yes,” he said. “I have to.” He wondered if he would be a simpering mess.

Lucretia eased the vehicle onto the rough access road. “It still might miss,” she said. “You can come back.”

“I like your idea. She goes global.” Bobby watched his cabin diminish in the Dodge’s mirrors.

Penny, and the others, would leave their mark on every part of the world.