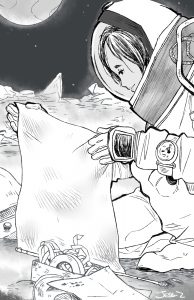 Even on the moon there was trash. From food wrappers to an entire spider-legged descent stage of an ancient lander, foil glinting in the earthlight, the Tranquillity region was littered with detritus. Xiu Li moved among it in a bouncing lope, stopping every so often to stuff a camera case or bag of desiccated faeces into her Digester; such were the joys of the second human on the moon in almost a quarter millennium.

“Anything yet?” said Vao, stiffly posed on the horizon, the banner in her hands emblazoned with the hideous yellow-green logo of Sansobal-Tiaga. “Is this useful, or are you just leaping about?”

“You can’t rush art,” said Li, and could almost hear the giggling from Earth. Everything they said and did was being watched by millions, and she’d said that phrase so often on the ascent that the public had decided it was her catchphrase.

“No, but artists are fair game. Besides, we have more than enough cleaning time lined up for us after this photo shoot.”

Li picked up a crispy wet wipe, squeezed it tentatively, and dropped it into her Digester. “It’s not a photo shoot,” she said, and gazed at the banner-bearing astronaut on the horizon. A gibbous Earth hung huge in the sky. She wished she could do nothing but stare at it, let her suit’s camera record the image and be done with it. But Sansobal-Tiaga had brought her up here to create art, not send back a few shaky photographs that any drone or amateur astronaut could have taken.

Trash art, or wuyongyishu, was usually just a phase young artists went through, capturing the beauty inherent in the ugliness of an electronics graveyard or a woodland choked with plastics. Li had found a way to expand on the concept by photographing the trash most people forgot even existed: the Kessler belt.

Look up at the sky and it seemed as blue as any photograph from the past. But in truth humans had found a way to fill the sky with trash, tens of thousands of tons of it, orbiting the Earth with such speed that it shredded any satellite or spaceship that tried to pass through.

She took many photos of Kessler belt debris before she conceived of her award-winning photo. It had taken Li several months of telescope time and several more tracking orbits before she succeeded: an astronaut’s discarded glove, captured just as it was crossing the penumbra of a half-moon. The result had become an icon of Sansobal-Tiaga’s Kessler Clean Up campaign, almost as recognisable as the crescent-smirk bisecting Sansobal-Tiaga’s logo

Li had never had much interest in space; to her the Kessler belt had merely been another source of trash with hidden beauty. But that photo made her practically synonymous with Sansobal-Tiaga’s nascent space program, and now that the Kessler belt was no longer impassable, they had come to her. They needed another iconic image, one to symbolise the re-exploration of the solar system, and they wanted her to create it.

She’d made thousands of sketches in the past few months, trying to capture the energy of that glove against the moon. Even when she’d settled on a design she’d had her doubts, but she’d convinced herself that when the time came it would be a simple matter to identify what was wrong and fix it. Now she was standing on the moon, hearing nothing but the bubbling of her suit and her own breathing, and she couldn’t figure out what was wrong. Structurally the composition was competent enough: Vao bearing the Sansobal-Tiaga banner in front of the Earth, flanked on one side by an ancient descent stage and the iconic basket-shaped Digester on the other. But there was still something missing from the tableau.

The only possibility Li could think of was to add a piece of trash in the foreground. But which one? Crumpled insulating blanket? Torn backpack strap?

“Fifteen more minutes,” said the voice of Sansobal-Tiaga from Earth, as crisply as if they were standing beside her. She jumped; it was all too easy to imagine she was alone in this desolate landscape. “You promised it would be done by now.”

“Just a little longer,” said Li as she lept, swooped and landed next to a shovel, speared into the lunar soil and still standing upright after all this time. She pulled it out and pushed it into the Digester, the long handle vanishing as if she was a magician making a pole disappear into a hat. Every scrap of trash she picked up and destroyed was another couple of seconds where she didn’t have to think about the photograph.

A hammer. A film magazine as wide as her palm. They were all dusty, and the moondust clung to her suit when she picked them up. Already her silver suit was spattered grey, as if a bored child had started to colour her in with a pencil. She thought she ought to feel dirty, but she didn’t. Inside the suit there were no concrete particulates or smartpollen. She was breathing pure oxygen. This was perhaps the cleanest she’d ever been in her life.

She looked up at the tableau again. Vao was still standing there like a Roman standard-bearer, the smirking Sansobal-Tiaga logo clashing horribly with the sedate landscape around it. Perhaps the scene was too calculated, needing an element of spontaneity. But Li’s works always had an air of calculation, of control. Spontaneity wasn’t what they expected from her.

“Five minutes,” said the voice of Sansobal-Tiaga. As if Li wasn’t watching her oxygen as closely as her Earthly voyeurs. She began to stop picking up things, leaping hastily to every scrap of trash she saw, barely pausing before moving on again. Urine bag. Tripod leg. Spacesuit boot; perhaps as homage to her first photo?

Then something caught her eye that stopped her from moving on. At first she took it to be a stray towel, but when she picked it up she found it was connected to a telescopic pole with a horizontal bar sprouting from the top, stretching the towel flat.

It was a flag. Cosmic rays had long since bleached the colours out of it, leaving it an unbroken sheet of wrinkled nylon. More than one organisation in the distant past had landed rovers and planted flags in the Tranquillity area; she’d need chemical analysis to tell if it was Indian, American, SpaceXheng or any of the others.

Li straightened up and looked at her canvas again. Vao, the lander, the Digester, the banner with the smirking yellow-green Sansobal-Tiaga logo.

She grabbed the flag and began running in long, leaping strides, putting such force into her footfalls that she was irrationally afraid she might push herself off the moon altogether. “Vao, I’ve found it!” she shouted as she ran. “Catch this!”

The flag flew like a drunken javelin over the rocky surface. Vao dropped the Sansobal-Tiaga banner to catch the falling flag in both hands.

“What’s this for?” she asked, a question no doubt being echoed by every watcher on Earth. In Li’s ear the voice of Sansobal-Tiaga began to jabber; she turned the channel off. Ever since she was offered a place on the expedition she knew she would be making history, but this was the first time she truly felt the weight of responsibility that entailed.

Now that the Kessler belt could be traversed, the entire solar system beckoned. The ships to Mars and Venus and Europa were already being constructed, and more would follow. Perhaps it was a good thing that the Kessler belt had locked the Earth away from it all, waiting until ships could be built that wouldn’t spoil these new worlds with trash. Think how few times her ancestors had come to the moon, and they had still managed to leave two hundred tons of debris smeared across the surface. The rest of the solar system had been saved from becoming Earth.

But that didn’t mean Sansobal-Tiaga owned the future.

“It’s a clean start,” she said, as the flag devoid of nations fluttered in the non-existent breeze.