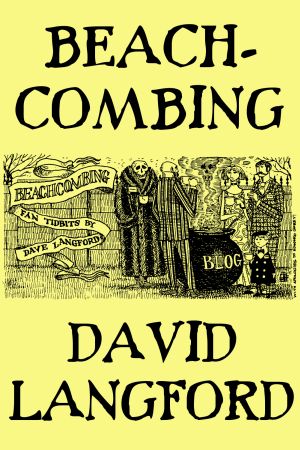 I have come to an immense, difficult, portentous, conclusion:

Fan writing, particularly of the “convention report” variety, is the purest expression of Fannishness that one can distill from the inchoate zeitgeist (if you are using Elbert Hubbard’s definition of “zeitgeist”: “The things that everybody believes, but that nobody understands.”) that is science fiction fandom. (Who was Elbert Hubbard?* I don’t know. Probably someone nobody understood.)

I will further declaim that David Langford, he of the British Isles, is one of the leading practitioners of said art form, for art it truly is. At least so long as you’re not paying too much attention to how the pictures are hung.  (No more wire hangers!)

Not to mention the booze.  Or the pot.  Though when in the thick of things, the influences of either or both are hardly noticed.

If the above is insufficient mapping of the terrain, consider this:  Good Fannish Convention Reporting is hardly ever reporting on the convention.  In fact, there’s rules for writing convention reports and the very first one of those rules is “write about anything – except the convention”.

Which is of course one reason why Langford’s convention reports float above the churn like triple-whipped cream; they have lots of words and very few of them are about the convention.

The second rule of convention report writing is:  “Don’t write about the convention, but do convey the emotional feel of the convention and the inclusion of embarrassing bon mots is de rigueur.”  (Note that I do not believe that David Langford is in possession of a copy of those rules.  He comes by them naturally.)

This kind of writing resonates with fans because it’s the closest non-verbal reconstruction of what is going on inside the heads of fans.  And not just when they attend conventions, but ALL the time.  That far-away, glassy-eyed stare is not inattention:  it’s deep concentration masquerading as vacuity.  Inside that Fan’s head, they’re trying to integrate everything from the nature of Race Bannon’s relationship with Dr. Quest, why the price of eggs in China is no longer predictive of hemlines, the words you just spoke, the influence of quantum entanglement on pork belly futures, just “how?” is the color green and when?

You’ll get a response, though in good Fannish tradition it will likely have little to no apparent connection to whatever it was you just said.  Of course that just means that you’ve now both got something to talk about for the next half hour.

Which  brings us to Beachcombing and Other Oddments, an oddly accurate title for a collection of fan writings.  Odd because it contains some truth.  And equally odd, if not transgressive, is the fact that I’m actually going to say something about the collection itself in this review.

David Langford is funny.  His Fan writings are funny.  They’re off center, Odyssey-like pastiches that leave you breathless and wanting more.  Or at the very least, feeling deeply, deeply regretful that you weren’t there in person, because, somehow, you’re not quite convinced that the happenings reported on actually happened that way (but boy, if they did, you really missed a thing!).

David’s work drills into the heart of the mind of a Fan (how’s that for Thog?), extracts the essentials and lays them on the page in all of their squishy, quivering, bleeding glory.

If you want to know what it’s like to attend a convention – go to a convention.  Then go home, settle down and read an entry from Beachcombing.  It won’t explain anything about what you just experienced, but at least you’ll know that you’re no crazier than the rest of us.

You can buy the print edition here or the Ebook (multiple formats).

And, of course, the monthly Ansible fanzine, which published its 400th issue just last month.

*Be unconcerned.  Elbert Hubbard has no apparent connection to that other Hubbard.  Elbert was an author and died on the Lusitania.  He’s quoted as saying “Don’t take life too seriously. You’ll never get out of it alive”, voiced, appropriately, by Bugs Bunny in Rabbit’s Feet.

The Puppy Roundup Era Comes to an end…(to be followed geologically by the “What TOR Boycott?” era)