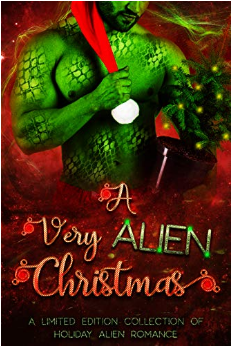 Believe it or not, science fiction romance encompasses winter holiday tales and recently a group of nine SFR authors came together to create A Very Alien Christmas anthology. Here’s the blurb:  It’s beginning to look a lot like … aliens for Christmas! Get ready to set your holiday thrusters to hot! If you love alien romances, you’ll adore this brand-new collection of steamy alien novellas and short stories by New York Times, USA Today, and international bestselling authors.

I was able to interview three of the authors about the ideas which inspired their stories, plus a few other questions.

Trixie wants to leave Earth and Zayton needs a mate. It’s Christmas time and the tree isn’t the only thing burning, so is their passion for each other.

Inspiration: As it is a part of a Christmas collection, I became inspired by the idea of an alien dressed up as Santa Claus and whisking his future mate away to his home planet. From there, I wanted there to be a bit of a romance; and them becoming the future royalty for SaxZon. For the planet, I kept thinking about the Garden of Eden, and how I would picture it on a different world with a lush paradise, living in trees and no animals, and just the aliens.

Next for me: I’m planning on having a couple works published in the next couple of months. A short alien story that will be released in Captured & Captivated on December 7th. And a fairy retelling urban fantasy of the Jungle Book.

To Be Read list: Oh gosh, I’ve got over 100 books that are in my pile. As of right now I’m reading the following: My Beloved by TM Mendes, Scarlet  by A.G. Gaughen, and Entwined by A.J. Rosen.

Tricia Schneider, The Alien and the Elf:

Can an alien and an elf work together to save Christmas?

Inspiration: The first image that popped into my brain when I thought about writing an alien Christmas novella was Santa’s sleigh being pulled with a bright beam of light into a spaceship. That prompted Noelle the Elf’s space adventure with the alien she falls head over heels in love with.

What’s next? I have more sci-fi alien romances coming out in 2021, including a novella in a collection called Alien Embrace. I’m also working on a few more paranormal romances that involve shifters and vampires.

Not all aliens know how to abduct a human… and if your target is Santa himself, you better get ready to have your stocking filled and your bells jingled.

Inspiration: I’ve written several male-aliens-abduct-human-female books, but when I was trying to come up with an idea for a Christmas version, I knew I had to turn the tables. Instead of hunky alpha males, I now have two female aliens abduct Santa – and he’s ho-ho-hot! I didn’t even try and make this serious. There are puns galore, lots of steam and the odd reindeer in the cargo bay. Basically, I used everything I love about alien romance and gave it a funny Christmas twist.

What’s next? When I told one of my favourite audiobook narrators, Kyo Sija, about this story, she demanded that she could turn it into audio. Well, I let her, obviously, and the result is hilarious. I’ve got several more books planned as part of The Intergalactic Guide to Humans. One has just been released (Alien Abduction for Beginners) and the sequel will be in the Captured and Captivated anthology in January (Alien Abduction for Professionals). These stories are all set in the Starlight Universe, my big new project, for which I have several series planned that involve everything from space reapers to werewolves on a spaceship.

TBR list: I’m about to finish reading Veronica Scott’s Mateer and have Jadrian lined up next. At the same time, Liza Street and Keira Blackwood’s Billionaires and Bodybags is waiting on my Kobo along with the fourth (or fifth?) reread of Maria V. Snyder’s Chronicles of Ixia. I need those once or twice a year and I think I’m starting to get withdrawal symptoms. After about a year of reading mostly alien romance, it’s time for some good old fantasy. And then aliens again.

Blurb a Buddy? Seasons of Sorcery!

Three is a Magic Number