In this week’s viewing: One last episode of Tower of God to wrap up the season. 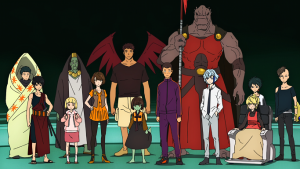 Tower of God finale – Rachel reflects on the events since she entered the testing area while the remaining examinees prepare for their formal entry into the Tower. Though Bam is gone, some of them vow to climb the Tower in his memory. Oh wait, big surprise, he’s still alive.

Fans of the Tower of God webcomic apparently hate Rachel, so I suppose this infodump about her motives is meant to lessen her guilt by explaining that she is being manipulated by forces beyond her knowledge. From the point of view that Bam was her creepy stalker, it makes her motives less pure. Either way, it emphasizes that here is yet another character who would make a far more interesting protagonist than Bam.

And it does lean in hard to the stalker fantasy again. Despite telling Bam to knock it off a hundred times, it’s shown that Rachel secretly still adores him and believes deep in her heart that no one could possibly even compliment her like him, and she’s just jealous because he’s so very very special. It’s worth recalling at this point that Khun was also badly wronged by a woman who played on his emotions, which makes this start to look like a pattern of how any future romantic subplots might play out.

This is the third entry in the “Crunchyroll Originals” line, so it feels fair at this point to look back and see what to expect from the label. The first was The Rising of the Shield Hero, which is now remembered by anime fandom at large, if at all, as “oh yeah, that incel anime”. The second was In/Spectre, which for all I know was perfectly okay as a series of light novels, but a story full of nonstop talking, talking, talking did not translate well to television. (The Crunchyroll Originals trailer from a few months ago tries to sell it as part of a lineup of nonstop action shows, which, hoo boy, has to have disappointed some people by now.)

So here we are at #3, a show with some cool art, some flashes of expert character writing and imaginative setting, but which is ultimately dragged down by an absolute dead weight of a protagonist. Remove Bam, replace him with a bit more exposition about the world and the role that the Tower plays in it, and this would be worth watching more of. As it is, I’m happy to part ways with it here.

If you feel the same way about this being a frustratingly mixed show, then I do have a recommendation for you: just check out the work that it has cribbed many of its elements from. It has many of the same characters, including the pale-haired boy with Machiavellian instincts and complicated family dynamics; the low-powered doofus who manages to bulldoze his way through somehow; and the person who seeks power and legitimacy to gain revenge for his peoples’ victimization. It has a similar story, down to the first arc being all about a series of ever more elaborate challenges to winnow a field of wannabes. It even has a hero gifted with overwhelming power. What it doesn’t have is a sad potato at the center of the story.

That work is Hunter x Hunter, and all 148 episodes of its most recent TV adaptation are available internationally on Crunchyroll. Enjoy!

In Memoriam TerBi Prize awarded to Domingo Santos and an Interview with Rubén Ramírez;

Their name is Legion (a modest proposal)