Season 2 of Nikola Tesla and the End of the World is the perfect thing to fill those streaming needs without the long-term commitment.

This is a long overdue review, but perhaps just in time as most of us are left stranded at home with little to do in regard to new entertainment. The second season of Nikola Tesla and the End of the World, a quirky little series created by Canadian filmmaker Ian Strang, directed by Strang and Leif Kaldor of Zoot Pictures just might fill that void. Staring Gillian MacGregor, Paul O’Neill, Stephanie Sy, Adam Hurtig, John B. Lowe and a tight team of other talented actors, this series may be small in size, but it delivers big in story and entertainment.

In season one (reviewed here at Amazing Stories by John Dodds), we were introduced the fantastic characters who will take viewers on an unexpected journey. The great great grandfather of London physicist Dr. Sophia Clarke once worked for Nikola Tesla. When Sophia discovers long lost plans for a device which assumedly enables one to transmit electricity without wires. She decides to recreate the Teslascope magnifying receiver, and during the test of the device’s mechanics, she opens a portal in time, transporting Tesla to the 21st century. 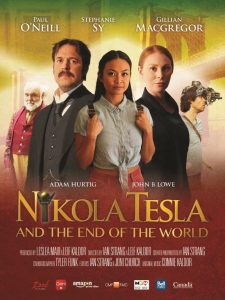 In the second season, Tesla has accrued an enormous debt in an effort to find his way back home though the multiple dimensions of Earth.  As Sophia tries to help Tesla fulfill an unlikely deal with the Multiverse Unification Agency to pay back the debt, we are introduced to an array of worlds that are reminiscent of classic dystopian scenarios popularized in literature.

As if this this wasn’t enough adventure for the viewers, Tesla and company must also thwart the efforts of an interdimensional death cult hell bent on vaporizing all of the dimensions along with all of the multiple versions of humanity.

Does this sound silly? Yes. Are some of these premises oversimplified to allow the plot to comfortably maneuver through the hypothetical complexity of time and space? Yes. But this is what makes the latest season of Nikola Tesla and the End of the World such a joy to watch. Forget about all the rules of theoretical sciences and let this delightful cast of characters played by some talented actors tell an amusing little story.

The visual imagery exceeds far beyond what we would expect from a small production house. Though each “season” is the length of a single episode of a modern streamed program, and each “episode” of Tesla would be considered shorter than most commercial breaks, this series brings just enough mystery and intrigue to leave the viewers anxious for more.

Available for viewing on Amazon Prime in the U.S. and U.K., as well as CBC Gem in Canada, the second season of Nikola Tesla and the End of the World is the perfect thing to fill those streaming needs without the long-term commitment.