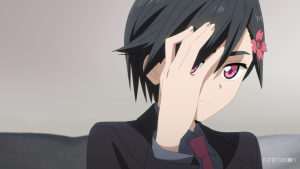 ID: Invaded #5 – The team still needs to find the real Gravedigger, but an odd chance encounter between Hondōmachi and the missing Perforator victim gives them the clue they need. With Narihisago finally able to explore the Gravedigger’s mind and Hondōmachi making more brilliant deductions in the field, the mystery is finally unravelled.

I’m beginning to suspect that Hondōmachi is the real protagonist of this story. Narihisago is still getting more screen time, but he’s essentially a static character. Hondōmachi is the one growing and changing. And just as the team seems ready to find a replacement for Narihisago, Hondōmachi has been told that her willingness to sacrifice herself is a sign that she may able to enter the id wells. And she’s said that she wants to try it.

The break in the case comes from recognizing that an apparently coincidence isn’t one, so let’s look at another suspicious coincidence. What are the odds that Fukuda, the Perforator, should manage to pick a victim who was already an established serial killer? And not just any serial killer, but one who also had contact with John Walker? What were Fukuda’s criteria for picking victims, anyway? Hondōmachi was just an inconvenient person who needed to be gotten rid of, but what about the est? 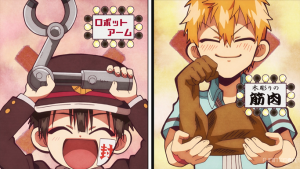 Toilet-Bound Hanako-kun #3 – Nene finds a new hot guy to have a crush on, but all he does is slip her a mysterious paper crane in exchange for a plot point to be named later. Meanwhile, the next apparition to get out of hand is a staircase that eats people and sends them to the spirit world, where Nene, Hanako, and Kō soon find themselves on a peculiar hunt for body parts.

First Magia Record had a killer staircase and now this. Apparently there is a national phobia of which I was previously unaware.

Although the spirit world is a fun place to look at, not much is revealed about the motives of the staircase spirit. Hanako says she’s one of the seven wonders of the school, so it seems like the disappeared students aren’t a complete abberation. On the other hand, he says she’s gotten out of control. So maybe there is supposed to be a happy medium where the stairs just occasionally wipe someone out of existence. This really is a horror story. 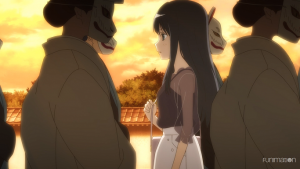 Magia Record: Puella Magi Madoka Magica Side Story #4 – With no further clues to Ui’s whereabouts, Iroha decides her best course of action is just to hunt down rumors of anything weird going on. Next up is a shrine where it is said that people can be reunited with missing loved ones. Like with the Chain Witch, the rumor turns out to be true, but is that really Ui?

You can really tell this is adapted from a video game here, when the characters have to collect all the stamps and then solve the final puzzle in order to enter the shrine. The battle with this week’s witch feels kind of tacked on as an afterthought. It does give us a chance to see that Yui isn’t all empty talk, though; it looks like she really is one of the strongest magical girls there is.

Yachiyo is shown to be a sort of venerable elder in the magical girl community. Even Yui, strong as she is, looks up to her. Everyone considers her the best expert available on whatever’s going on in Kamihama, and she seems to have survived longer than anyone else has fighting the especially strong witches. But even she seems to be at a loss to explain what’s going on lately. 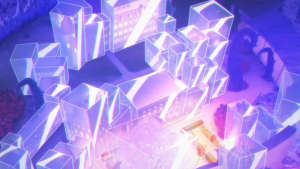 Welcome to Demon School! Iruma-kun #17 – Kirio’s first act is to supercharge his Barrier power to turn the school into a maze of invisible walls, channeling everyone into one spot but also revealing himself as the perpetrator to anyone who knows much about him. Furthermore, Kalegle starts to suspect that Sullivan, the one person who would normally be around who could dispell all this quickly, has been sidelined as part of the same plot.

Welcome to Demon School takes pains here to show its young viewers that authority figures are generally trustworthy people who are doing good, be they upright types like Ameri or complete jerks like Kalegle. In fact, it feels like a little too much time is spent on it, given that Kirio has been up in that tower gloating for over a month and he’s only just now getting on with the terrorist attack.

But here comes Iruma to save the day, probably unintentionally, probably also after a big long flashback about Kirio’s feelings. And then after that, he can return to more mundane problems, like the love triangle he doesn’t know he’s part of, and which has just gotten even more complicated. 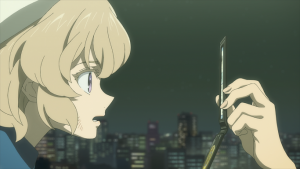 In/Spectre #3 – Kotoko answers the mountain god’s final questions with ever more elaborate storytelling, then admits later to Kurō that what she’s doing is simply coming up with plausible conjectures, staying within the facts but not knowing if they are the real answers. And then the real story starts, as the apparent ghost of a pop idol stalks the city and Kurō’s ex-girlfriend has a most unfortunate meeting.

I’m glad to see the story exploring the effect of what’s happening around Kurō on Saki. That whole business of the breakup could have been included just to make Kurō’s backstory a little sad. But it’s shown to have left Saki with serious lasting issues, and her dealing with them looks like it will be a big part of the story for a while.

As for the Steel Lady, she’s obviously not a normal ghost or Kotoko wouldn’t be involved. In fact, as Kotoko’s specialty is more nonhuman spirits, that suggests that something has simply found it convenient to copy Nanase’s form.