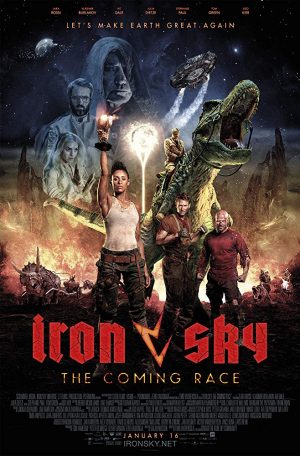 When the web lit up with announcements of the 2012 film Iron Sky, I was intrigued, I have to admit.  That project was an early, somewhat successful, attempt at crowd funding a “major motion picture”, one with serious money spent on effects and promising to bring on board name talent.  Promotion for the film strongly suggested that it would not be an “Academy” D picture effort.

But I have to also admit that what captured my attention the most was not the unique form of funding, it was the subject matter:  there really was a secret Nazi moonbase featuring WWII-era Nazi super-weapons and they were coming back to conquer the Earth.

I can’t say why Secret Nazi Moon Bases fascinate me;  perhaps it’s Heinlein’s fault for working it into his Rocketship Galileo tale, but there it is nonetheless;  I find the WWII aesthetic appealing, extending to model kits such as the Hannebu 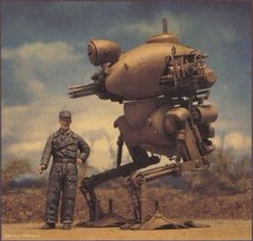 So something like Iron Sky was bound to grab my attention. I made a point of following developments of the project and watch the film when released. I reviewed it for my defunct blog The Crotchety Old Fan, giving it good marks for the attempt (owing to its ambition exceeding its crowdfunding grasp, some allowances had to be made); full of satire (Sarah Palin is depicted as the US President), not afraid to break the fourth wall and certainly knowingly planting its tongue in its cheek, I was not disappointed; it could have been a better film with proper funding, but it wasn’t a terrible one despite falling short.

I was mildly interested to learn that a sequel was in the works; not so much out of an interest in seeing it as the fact that this indicated that Iron Sky itself had been successfull enough to warrant a sequel; such boded well for crowd-funded feature length films (in contrast to, for example, the efforts to get the Star Trek fan film Axanar to the public).

Mild interest certainly as I was surprised to see it being offered by Red Box.

Normally I don’t “waste” money on films that might or might not be up to snuff, preferring to wait until they’re available through one streaming service or another, but for a buck seventy nine, I felt the expense justified, even if I’d be turning off the film after the first couple of minutes.

I ended up watching it all the way through, enjoying most of it, having a few quibbles, but in general finding it a worthy, if distinctly B-level, watch.

Spoilers from here on.

I felt I’d definitely gotten my money’s worth when I was treated to the scene of Adolf Hitler riding a T-Rex. Which should clue the reader in to the fact that much of Iron Sky The Coming Race, goes over the top. Waaaay over the top.

The creators of this minor and bizarre franchise (what do we call such a thing? Nazi Slasher Flick?) are well aware of the fact that they are in satire and farce territory. In fact, sometimes they beat a knowing audience over the head with it, when, for example, the action-hero lead Malcolm (well-played by martial arts master Kit Dale), prepares for his sacrificial fight with the bad guys by taking off body armor and donning a red shirt, and then surviving the battle.

The acting ranges from acceptable to pretty darned good, with standout performances by Vladimir Burlakov as Sasha and sometimes outstanding bits by Lara Rossi as Obi (she’s a bit uneven, but you can ignore most of the uneveneness); Tom Green turns in a very good job as Donald, the leader of a moon-based religious cult that worships Steve Jobs, “in the cloud”. And Udo Kier reprises his role as the Moon Furher Wolfgang Korzfleisch, and doubles as Hitler, Wolfgang’s brother.

What’s that? Hitler didn’t have a brother?

Yeah, well, here’s the thing. You see, ALL of Earth’s leaders – from the beginning of time – have actually been lizard people, known as the Vril. They arrived on Earth during the time of the dinosaurs and have been dominating humanity ever since they created the species.

Wolfgang Vril was a bit of a softy, you see and grew enamoured of Earth’s creatures, especially the hominids. Taking some of the Vrilia – a source of energy and longevity – and giving it to his favorite pets “Adam” and “Eve”, he created the human race, which quickly became a source of problems for the Vril and led to a split between Vril Wolfgang and Vril Hitler.

Meanwhile, when the asteroid that annihilated the dinosaurs hit, the Vril took their spaceship underground and discovered that the Earth really is hollow; establishing themselves there allowed them to survive the nuclear war between the Moon Nazis and Earth people largely intact.

Still following? (Alien lizard people started the human race; some fled to the Moon, others have been living inside the hollow Earth for millennia; the Moon people tried to reconquer the Earth, which led to a nuclear war; a handful of human survivors fled the uninhabitable Earth and reestablished themselves in the crumbling Nazi Moonbase.)

A small contingent of humans have also apparently survived on the Earth and one, an engineering genius – Sasha – repairs a Nazi flying saucer and flies those refugees to the Moon; Wolfgang Korzfleischer is among them. He knows where there’s some Vrilia hidden on the Moon.

But the Moonbase is falling apart. The existence of the hollow Earth is revealed and Wolfgang convinces Obi Washington, daughter of the leader of the non-Nazi Moon inhabitants, to return to Earth, visit the city inside the Earth and take the source of Vrilia so that it can be used to keep the Moon base habitable.

Unfortunately, though they are successful, the hollow-Earth, Lizard Nazis, led by Vril Hitler, follow them back to the Moonbase, where an epic battle, including Hitler riding his pet T Rex, takes place. The moonbase is no longer viable – but

The captured Vrilia can be used to power the one remaining ship and the survivors leave the Moon, for Mars.

Where, apparently, the Commies are in residence, having established – you guessed it – a secret base during the Cold War.

I think the only negative thing I can say about this effort is that the plot is a bit rushed; some scenes that should have been included for the story’s continuity were skipped or glossed over with hasty dialogue; one could almost say that this should have been a two-parter to fully explore all of the craziness inherent in the concept.

It seems this crew is fully committed to unearthing and poking fun at just about every Science Fiction-esque conspiracy theory we’re familiar with. It wouldn’t surprise me at all if they found Richard Shaver on Mars.