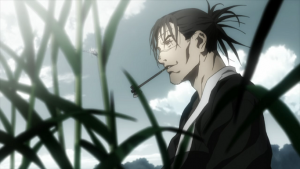 Blade of the Immortal premiere – After two years of training, Rin is ready to go after the rogue samurai who killed her father and abducted her mother. But after an 800-year-old-woman advises her to get help, she looks up Manji, one of the best swordsmen there is. Partly because of his skills, and partly because of some handy symbiotes that mean he can’t die even if he wants to.

Blade of the Immortal is Art with a capital A and it wants you to know it. It’s full of beautiful landscapes and lovingly rendered characters composing themselves behind screens of intricate vegetation. It’s also the kind of Art full of portentous symbols like swarms of buzzing dragonflies (associated with samurai) and an endlessly turning wheel (the cycle of existence). And the kind which wants to show you how arty it is by absolutely reveling in blood, gore, and the brutalization of an endless supply of beautiful women.

It’s that last part which lets down an otherwise excellent alternate-history action drama with sfnal undertones. Fight scenes are endless shots of bodies being sliced apart in arbitrary spots as though they are made of Jell-O. Every woman shown except Rin dies horribly. Rin herself gets one moment of badassery and then has to be rescued by Manji from a creepazoid rogue who’s been sending her love letters ever since helping murder her family. 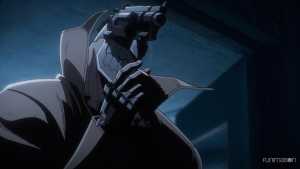 No Guns Life premiere – Jūzo Inui makes a living among the downtrodden as a Resolver, a detective/troubleshooter for hire. His latest case, arriving through the window of his office, concerns a cyborg, or “Extended”, which has kidnapped a child. But not all is as it seems, and Inui soon realizes he’s up against the mega-corporation which invented Extended technology. But Extended cases are Inui’s specialty— partly because he’s one himself…

Like Blade of the Immortal, No Guns Life is about a man called to protect the weak in a dark world. But rather than violent nihilism, this one has the darkness of noir, where most people are basically good and just getting along as best they can. It also allows people to be strong or weak, and kind or unkind, irregardless of gender. The one act of deliberate cruelty that comes to light in this episode is much milder than most of what happens in Blade of the Immortal, but No Guns Life manages to make it more repugnant against this background.

To top it all off, No Guns Life is going to make you take all this seriously with a main character who has a literal giant revolver for a head. It sounds ridiculous, but the show finds the sincerity and the heart to manage it. 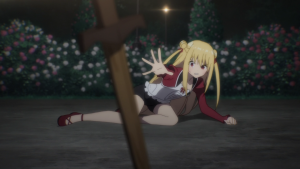 Assassins Pride premiere – Fūga Vampir is an assassin sent to investigate the matter of a young noblewoman who manifests none of the magic which is hallmark of nobility. Posing as her tutor, he will determine if she has magic, and kill her if she doesn’t. Instead, he is smitten with her grit and determination in the face of her disability and arranges her to fake having magic.

Assassins Pride has the bones of a decent story but many, many problems with its execution. One of them is the conflicting demands placed on its characters. Merida, the girl involved, has to be spunky and resilient to impress Fūga, but also vulnerable and helpless to give him an excuse to be in the story at all. Fūga has to kill Merida because a magicless noble is too pathetic to live (ableist much?), but the alternative path that can give her magic which is initially advertised as difficult and dangerous is actually quick and easy.

Another problem is the setting. The brief backstory give the impression of a dying-Earth arrangement, with humanity reduced to living in a fantastic city shaped like an upside-down chandelier, but that quickly melts into the usual anime fantasy melange of overdesigned outfits and vaguely generic European architecture, destroying any sense of place or time. The camera’s weird obsession with everyone’s thighs does not help.

In short, another one to give a miss.

That’s all the premieres for now! Tenka Hyakken has not been picked up for international distribution, Beastars was eaten by Netflix, and Psycho-Pass 3 won’t be starting for another couple weeks.

That means it’s time to figure out the season lineup! I’m ready to give No Guns Life a second look, and in the meantime, let’s check out last week’s winners, plus the leftover from last season… 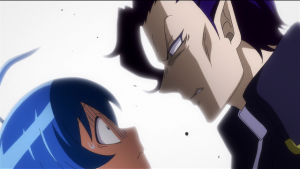 Welcome to Demon School! Iruma-kun #2 – Wouldn’t you know it, for his first actual class, Iruma gets the teacher who hates Sullivan’s guts, and his too by extension. Though Iruma is seemingly set up for failure, no one at the school has reckoned with the writers’ extensive knowledge of Western fantasy tropes.

So the premise of this show is, “What if Harry Potter managed to defeat Draco on his first day and Snape on his second?” He’d have a much happier time at school, that’s for sure. Or he would if this Harry weren’t desperately trying to hide the fact that he’s a Muggle. 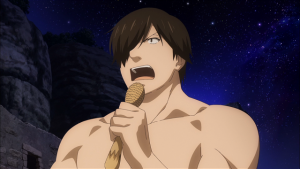 Kemono Michi: Rise Up #2 – Determined to achieve his dream as quickly as he can, Genzō puts on some clothes and goes after the rarest, the most dangerous, the most lucrative catches he can get. But following the money also means accepting a job pacifying the local orcs, which to no one’s surprise, means it’s wrasslin’ time again.

Kemono Michi feels like it has settled into a groove now. Genzō is more and more fun to watch as his confidence grows, Shigure makes an excellent straight man, and the show is better off having dropped the harassment schtick. It’s still making good use of Genzō’s wrestling background, not just in the actual fighting but in moments like where he understands going for the lucrative quests as signing up for the matches that offer the best prize money.

Best of all, this requires no understanding of Japanese portal fantasy tropes to keep enjoying it. 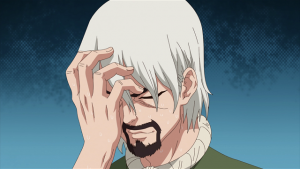 Dr. Stone #14-15 – Team Science manages to do almost as much damage to itself in the tournament as its enemies do, but with courage, luck, and a certain amount of suspension of disbelief, they win through to their goal. Senkū controls the village, Ruri is healed, and she and Chrome are free to marry. Now there’s just the little matter of organizing for Tsukasa’s eventual attack, and the mystery of how Ruri could have known who Senkū was before he even arrived.

The last part of creating the sulfa drugs is a great example of the “index card phenomenon”, where the author tries to cram every last thing they found in their research into the story somehow. It could have just skipped from “we have about 25 more steps” to presenting the medicine to Ruri, but no, kids, you need to learn ALL the names of the intermediate chemicals along the way. This will probably be on the quiz, too.

Dr. Stone is still both utterly devoted to science and thoroughly entertaining. Let’s see how the rest of this goes. 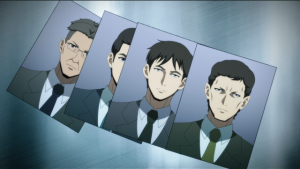 Special 7: Special Crime Investigation Unit #2 – In a quiet moment, Seiji is introduced to the unit and the awkward truth behind its existence. The threat it was created to fight was actually defeated almost a decade ago, and since then it has justified its existence by snatching up whatever interesting cases it can here and there. Such as a very complicated political assassination plot, which may have even more to it than even Ichinose suspects.

Obviously Nine is on the move again, but never mind that for now. The most important part of this episode is where Seiji’s leg has clearly been sliced open, and then he and his trousers are completely fine shortly afterward. Here is the point on which whether Special 7 is good or bad hinges: Was that just sloppy continuity, or another clue, along with Seiji’s amazing resilience in the first episode, that there is more to him than meets the eye?

I’m leaning toward the latter. Special 7 is operating more like a mystery story than an action show, letting the viewer form their own impressions before revealing what the master detective makes of it all. In that mode, it’s completely reasonable to have it scatter clues around to see if you notice, then get to the explanations later.

But sloppiness is still an option. The only way to find out for sure is… keep watching!

Well, I think all four returning shows have done well enough to earn a place in the season lineup. Next week, we’ll take a second look at No Guns Life to see if it can take the last spot. ‘Til then!

Meet Hyperion, the Largest and Most Massive Structure in Early Universe