I lost my only brother to leukemia in late November 2017. It was the most heartbreaking, devastating loss I could ever imagine, and I’m still reeling from it. Having experienced the death of a sibling myself made this conversation with author Melissa Stephenson difficult for me. I found myself almost crying multiple times. But from speaking with her, I also learned a lot about writing through loss and finding ways to use your work to process the pain. If you’ve ever experienced the death of someone close to you, I’m hoping this conversation will help you as well. 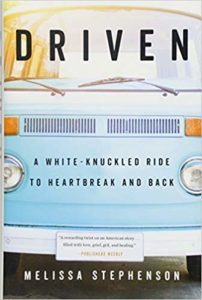 Emily Martin: Tell me a little bit about yourself and how you ended up writing Driven: A White-Knuckled Ride to Heartbreak and Back.

Melissa Stephenson: I’m Melissa Stephenson, a single mom living in Missoula, Montana, raising my two kids, who are now 9 and 12. And I mention that because I feel like they grew up with me writing this book. It’s a memoir very much about losing my only sibling. At least that’s what I told myself as I was writing it, that I was writing a book about him, because I don’t think I could’ve sat down to write a book about myself. But ultimately, it’s a book about our relationship and both of us.

My only sibling killed himself in 2000. I had just moved to Texas to attend an MFA program, so I had no support system. And for years and years, I couldn’t find a way to that story. Every time I tried to tell this big story about grief and loss, I got lost.

So, in some ways, this book took me a good decade to write. I started by writing little memoir flash pieces, and some of those ended up in the book. And it wasn’t until I tripped upon the shaping device of the cars that we grew up with and the car that I inherited from him when he died that I was able to sit down and write the narrative from beginning to end. So, the short version is I wrote this book from 2013 to 2016, but it definitely had material stretching back to about 2008. I was just writing these little snippets and I didn’t know how to organize them or where they would belong.

EM: What made you decide on writing this story using cars? Did that somehow give you better language to write about grief?

MS: Yeah, through the process of having the book come out and talking about it, I’ve been able to make sense of it. I grew up in a family where we couldn’t really talk about big issues that were pretty obvious, like alcoholism and addiction and a family history of suicide. But we could talk about cars or sometimes music as well. I wasn’t thinking that clearly when I tripped upon it.

One of the little flash pieces that I had written was about a time we bought our first new car off the lot in 1978. It was one of my first memories. And as I sat there revising that piece, I had that idea to make a list of all the cars that I heard stories about before my birth. Or the cars that I was too young to remember. And then the cars I remembered. And then I realized, aha, when my brother died I inherited an overweight blue heeler, and I had to take my brother’s 1979 Ford F150 to drive that dog back to Texas from where my brother died in Athens, Georgia.

EM: Athens, GA is where my brother lived too. That’s where we grew up. I feel like we need to talk about that.

MS: My visits to Athens were for my brother. And the middle section of the book is rooted in going back to Athens and settling his affairs a few days after his death. He was a big part of the music scene there. He was married at the 40 Watt music club, actually. So some of his friends who helped me on the book were also involved in the music scene in Athens. One of them was the manager at the 40 Watt. Another one was a bartender there. My brother was a regular around there. And his best friends were identical twin tattoo artists who ran the tattoo shop next door at the time.

EM: That’s so funny. I actually got a tattoo for my brother at that tattoo shop.

MS: I got a tattoo there the weekend I went to my brother’s wedding in 1999, a year before his death.

EM: That’s so wild. I feel like grief probably makes you want to find connections, but I have found that since my brother’s death, people have come into my life that have had strange connections to him or similar stories to me. You feel so alone in your grief, especially when you lose your only sibling. So you feel like nobody is experiencing that grief in the same way you are. So you feel like anything that connects you to other people and makes you feel like “oh, this person understands” is helpful. Because grief is so lonely for everyone, but maybe especially when you have a relationship with that person that no one else can share.

MS: It’s a really isolating and strange feeling to be like, “Am I an only child now?” And just navigating basic social situations moving forward when people ask, “Oh, do you have siblings?” And you’re like, “Well, yeah, no, uh…” So it’s very isolating that way.

And magical thinking is a way of feeling connected. There was a This American Life episode on coincidences, and people were telling all their stories of coincidence. I talk about that a little in the book, the idea of coincidences versus synchronicity. And I guess ultimately, whether it’s magical thinking or searching for connection, or if you really do pull in some of the random people that you need, it’s good medicine. It’s helpful. I’ve experienced a lot of that too.

MS: And I wonder if that urge is more powerful when we’ve suffered a loss that makes the world seem so frighteningly random, as almost a survival mechanism. The brain searches even harder for patterns. I was going through something like that recently. I was in Brooklyn for a month, and the magical thinking coincidences were flying all around me, but I was also going through a smaller, minor kind of grief. But when everything seems so frighteningly random, I think we search for connection even more.

EM: So you write fiction and poetry as well as nonfiction. What made you decide to write about your brother in nonfiction rather than fiction and poetry? For me, as a fiction writer, I have written about my brother in stories, and I personally found that easier because I can’t imagine facing it head on yet. Maybe it hasn’t been long enough for me, but it seems really hard. Maybe it’s not hard to you, but to me it seems hard.

MS: I think when the loss was really fresh, writing about the loss of my brother through fiction was the closest I could come. And even with the nonfiction, it took several years just building the confidence and the practice with words before I could find my way in. And even then, the way I found my way into that narrative was under the guise of “I’m going to tell you about cars.” That was the only way I could get the story out, and then the bigger pieces fell into place. So I think writing about him through creative nonfiction took a lot of time and it still took a device where I could hang each story on a different sort of narrative and let the larger narrative emerge that way.

EM: I feel like this is selfish, but I want advice. But I’m sure other people will relate to this as well. After experiencing an intense amount of grief, it’s hard to want to write about anything. It’s hard to sit down and get to work when all you want to do is lie in bed and think about how sad you are. What would be your advice to people like me who are wanting to write or wanting to create art of any kind and are finding some sort of life pressure or sadness getting in the way of that?

MS: A few things come to mind. Looking back now, I spent an agonizing amount of time procrastinating because I was lethargic and in pain and, you know, it’s that feeling of not being present. You’re stuck completely in the past, and then trying to navigate this bizarre present where your identity is revised. It was a very surreal experience, and looking back I think I was expecting a lot of myself. The amount of endurance and effort that it took to sit down and write when I wasn’t feeling it was great practice to create work once I was out of an MFA program and no one cared if I wrote anything ever again.

The other thing I would recommend: there’s a book I have about my mother that I just can’t write yet. But I keep notes, and I wish I had had the foresight to do that when I lost my brother. I don’t worry about the sentences. It’s just an ongoing file, and I just write on little notecards. I obsessively keep notes about texts or magical thinking things, like a song that comes on that makes me think of her. I think making note of those powerful things and saving them might be helpful now. And then in the future if you choose to write about those difficult things, you’ll have the dates and information and how you felt.

EM: How do you know when you have the right amount of distance to write about difficult nonfiction topics?

MS: Well, the one time I’ve had to find the distance was the biggest time. Every time I’d sit down to write the story of my brother and myself, it was like I had an arm that had fallen asleep, and I couldn’t get it to move. The sentences fell flat on the page, and I just couldn’t move that story forward.

Sometimes I think it’s about finding the right angle to contain that big something so it just becomes about taking off this little bite that you can tackle, maybe. And sometimes it’s just too big. I found that for years the story of my brother was just too big, so I just wrote short stories. For so long, I just felt so overwhelmed with the loss of my brother, so I don’t think I could have found a smaller story to get there.

EM: Thank you so much for talking with me about such a difficult topic. I really appreciate it, and this was so helpful.

MS: Thank you. Writing about grief has become a huge part of my life, and I never saw that coming. I think it’s good medicine when you feel like you can connect with someone else, so if you ever need anything let me know.

I hope you found inspiration in Melissa Stephenson’s advice as I did. For more help with coping with grief, try reading Books I’m Reading to Better Understand Illness and Death, or 10 Memoirs About Grief.

This article was originally posted on
https://bookriot.com/2019/09/11/melissa-stephenson-interview/