Here’s the only line of this review you will need to read:

Women can too write science fiction. 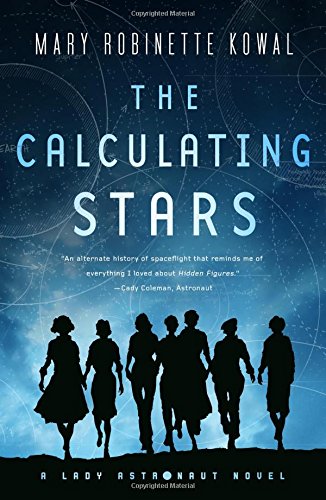 Given the high intelligence and character of our average reader, I am sure everyone now knows what to do:  go out and buy a copy, pick up the sequel The Fated Sky (released just two weeks ago) and confirm my foreceful, declarative statement for yourselves.

I know that the contingent of SF readers out there who think that the genre ought to be preserved like flies in amber will read the preceding and use it to reinforce their fevered dreams, but their dreams are unoriginal, unimaginitive and probably in black and white, and largely populated by fetish objects its best not to discuss.

It is ludicrous to believe that any particular group of people can’t, by definition, write science fiction – unless we’re including blastocysts in the “people” category – which I don’t.

Yep.  Kowal’s book is making me rant; suffice to say (and by way of doing my blood pressure a good turn), they’re wrong, that kind of thinking has always been wrong and this book is an exemplar of those previous statements.

I mention those unnecessary sub-genres because The Calculating Stars is a science fiction novel of the seminal variety, one that could be considered any of those things while also being a unique thought experiment of the kind we associate with Asimov, Clarke, Merrill, Heinlein, Wilhelm, Farmer, MacLean, Aldiss, Kornbluth, etc.  A science fiction novel that posits a supposition and then explores the ramifications of that initial starting condition, using logic, scientific knowledge and tremendous imagination and creativity to illustrate for us how things might be.

The Calculating Stars really hits a sweet spot for me owing to its “punchcard punk” backgrounding, and the deft way in which that concept is handled.

Could human beings have gone to space earlier than originally occurred? is a question that is tied in with another question science fictioneers have been asking themselves for decades now:  how could all of those masters have missed the one development that has inarguably changed the world into something other than how I, they and many of the rest of us – at least those of us old enough to have witnessed the Moon landing – imagined it would be.

I think this book provides an explanation by showing us, rather than telling us:  in the minds of our famed SF authors, and the engineers and scientists who took us into space, they already had the tools they needed to get there.  And personally, I think that the tech in question – our vaunted electronics and digital technologies – has developed the way it has as a substitute for not having gone to space during the computer-less vacuum tube era; the one so well described and explored by those 40s, 50s, 60s SF stories that make up the foundation upon which all modern science fiction rests.

Anyone familiar with the film based on Tom Wolfe’s book should remember the “revolt of the astronauts” scene, where Glenn and company confront von Braun;  they want a window in the hatch, they want explosive bolts to open that hatch, they want manuevering thrusters mounted to the capsule so that the astronaut “pilot” is not just “spam in a can”, but can actually affect their trajectory while in orbit and actually pilot their space craft.

Those guys were going into space when “computers” were both whizbang mathematicians and room-sized behemoths.  They didn’t care who calculated their trajectories, thrusts, timings and orbits, so long as they were right.

Kowal goes a long ways towards rectifying “the way things coulda been” with “the way things are” with her “punchcard punk” approach;  I even think she may be laying a foundation for suggesting that maybe it would have been a better way to get into and stay in space (I’m not too happy with NASA’s new capsule that is entirely electronic in nature:  not only could one electronic failure kill an entire mission, but never again will we be treated to steeley-eyed missile men figuring out how to adapt a CO2 scrubber’s square filter to a round duct, using random PHYSICAL objects inside the capsule.  Instead we’ll watch as astronauts suffocate because “rebooting the computer didn’t work”.)

But enough about me.

The story features not only a woman who is slated to become one of America’s first “Lady Astronauts”, but also one who is a Jewess.  Emma York was a WASP during WWII – one of the unsung female pilots who ferried planes around for the Army Air Corps (and it was not just a simple bus job!), who is also a mathematical genius.  She married an engineer who worked for NACA (before it became NASA), which puts her adjacent to a fledgling, post WWII space effort and sets the stage.

Kowal wanted to give an earlier start to space exploration and does so by introducing a natural disaster and some politics, the former making it imperative that the human race get off the planet in a significant way.

I love this approach because it fits in very neatly with a future I was encouraged to imagine would become reality as I read books like Willey Ley’s The Conquest of Space and von Braun’s The Exploration of Mars;  I watched much of the Gemini program as it led to Apollo, thrilled with the very real possibility that when I grew up, I could find a job on the Moon or even on Mars.

We were robbed of that future, but The Calculating Stars brought all of the excitement and wonder right back to the fore for me.  It may be taking place in an alternate universe, but I can still cheer them on!

I don’t want to get into the details too deeply (this is one you SHOULD read yourself) other than to address that elephant in the room we all saw when first entering here:  yes, the main character and narrator of this tale is a woman, written by a woman and – so what?  I’ll tell you what.  The team of Emma York, character, and Mary Robinette Kowal, author, may not have intended this novel to be the declarative statement on that subject that it is, but it is.  You will enter the mind of a woman, see things the way (a) woman sees them, experience the casual through the deliberate misogyny that women daily experience – but you won’t be deterred.  This aspect of the story is handled so deftly that most, with the possible exception of those who think their livelihoods derive from misogyny, will find themselves saying “ahh, so that’s what it was like…that’s NOT right.”  It’s a good thing, to present a character like this to an audience that question’s the viability of such a thing, but the real gift the reader will receive by the end of this story is not just a greater appreciation for the experience of being a woman, it will be an acceptance of this “other” in a way that will make us question why there was ever a question about it to begin with.

I HIGHLY recommend this story.  In fact, I just picked up the second volume and will be diving right into it as soon as this piece is finished.

Why Everyone Should Read V.E. Schwab’s ‘Vicious’

In this week’s viewing: Mars Red has a date with history, Megalobox contemplates time lost, and more!