Britain’s bestselling science fiction author Peter F Hamilton goes behind the scenes on having his work adapted for screen.

Why don’t you make this into a film?

The question writers get asked almost as often as: Where do you get your ideas from?

Authors are not in charge of such things. This is where producers come in, or more likely these days, a showrunner. Who’s basically a super-producer, someone who can write the pilot script and has the clout to push the project through a studio. In one respect it’s like finding an editor for your manuscript. Many publishers when offered the fabulous opportunity to buy your latest masterpiece offer a polite but firm No. Then finally a visionary editor decides to give it a shot, and you wind up with a contract and head straight down to the pub to celebrate. The same thing applies in the TV or film business, except producers and showrunners are a lot rarer than editors, and exceptionally busy.

But every so often one of them will show an interest; which in the real world means an assistant has read your book and sees potential for adaptation. I should say at this point that the enquiries I get are because I have an excellent film agent, who has been in the business for forever and understands it perfectly.

So, now a producer is interested, the process begins. This is when you discover that in addition to that well known place Production Hell, which we all love to read about when films and TV series are being made and delayed because of behind the scenes bust ups and budget disputes, there’s also a whole other world below that called Pre-production Hell.

This is the land where many novelists live. The land of phone calls booked weeks in advance to tie in to producers’ schedules and very different time zones, and (to be fair) rather nice lunches in good London restaurants, and lots, and lots, of discussions. If this stage goes well, you eventually have the first face to face meeting with a producer.  My favourite one was a few years back when I was shown into his office for the first time to be greeted with a wide smile a sincere handshake and the immortal words: “Peter, I love your work. I haven’t actually read any of your books yet.”

Thankfully, it’s not all like that. Authors used to get excited to be offered a film/TV option on their book. Which, trust me, is a very different proposition from turning up on set to watch the first day of filming. Even if by some miracle a script, a director, the stars, and the money does all come together you’re looking at years.

These days an option on a book takes second place to the shopping arrangement. This is a deal where you get actual real money (yes, okay, not much, but still…) for granting the producer eighteen months to put ‘the package’ together. The package is basically a script, design sketches, an established showrunner, suggestions of actors who’d fit the role, and a director. This then gets shopped round the studios to attract the most elusive aspect of the whole industry: money.

And that’s the rock onto which the ship of hope crashes. I have files on my computer containing the most amazing artwork, my locations, and starships, and characters brought to life. I have copies of scripts of films and pilot episodes, some written by well-known names, some I even got to contribute to. A lot of time and effort and, yes, money was put into creating these packages. They just haven’t made the jump to the screen. Yet. As the saying goes, there are a lot of people in the studio system who can say no, but only one that can say yes. Finding that guy is tough.

Interestingly, the one project which went ahead is my short story, Sonnie’s Edge. It’s part of the Netflix series, Love Death + Robots. Interesting because of my almost total lack of involvement, yet somehow they struggled through without me. Love Death + Robots is the animated shorts project put together by Tim Millar and David Fincher. Now that team is what I mean when I talk about guys who can say yes. I was lucky, because it was Dave Wilson at Blur studies who made Sonnie’s Edge, a creative team with talent that went beyond anything I’d seen before. I didn’t even know you could make something that photo-realistic.

Love Death + Robots was designed right from the start to be NSFW (not safe for work), and they weren’t kidding about that. It’s also jaw droppingly stylish, with each story assembled by a different artistic team. For me, some work, some don’t. But that’s always down to individual taste. That was obvious right from the start. Publish a book and you get some reviews and a few opinions on the internet. Love Death + Robots took that to a whole new level for me. Some people hated it, thankfully the big majority liked it, with the best and most frequent comment being: I want to see more of this world. There are reddit threads, YouTube reviews and explanations, lists of best episodes, fan art, cosplay… a whole universe of reactions. Some even mentioned the fact it was a short story, and said where it was available. Result.

So when I’m out on tour promoting Salvation, my new novel, and you ask: when are you going to make this into a film?  I’ll be able to tell you: it’s under discussion.

Salvation by Peter F Hamilton is out now in paperback (price £9.99, Pan Mac). The sequel Salvation Lost is published on 31st October and is available to pre-order. 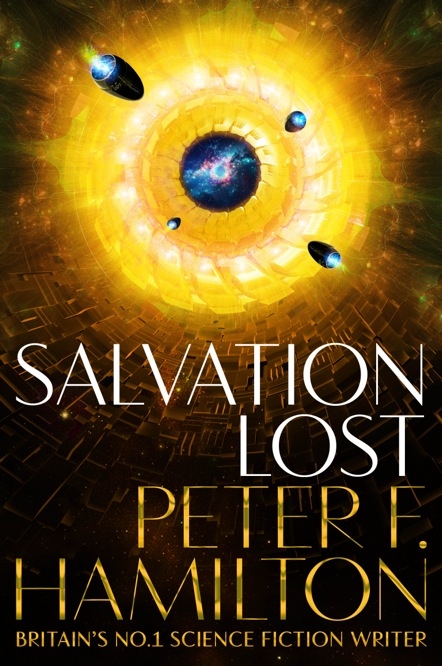 This week Steve throws a few spoilers into a review of Alien: Covenant. You might want to wait until you’ve seen the movie before you read this review. Just a friendly note.

From the New World, end – If there has been one theme running through every episode of From the New World from the beginning, it’s been that there is always another way to make the situation even more dystopian. And if there is a second one, it’s been how Saki is able to keep standing […]