In this week’s viewing: Attack on Titan and Demon Slayer finish up the season before we take a break from them, one for rather longer than the other. 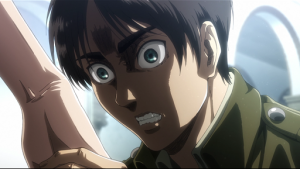 Attack on Titan finale – The surviving Survey Corps members are hailed as heroes. The truth that they uncovered is spread throughout the land, and refugees are returning to the territory they liberated. And finally, one day, as they promised each other, Eren, Mikasa, and Armin are able to wade into the sea.

And everything is still horrible. There are still recriminations over Levi’s choice to revive Armin instead of Erwin. Killing Titans is no longer an unmitigated good now that they know they’re killing people who had no choice in the matter. Beyond the sea waits an enemy that wants to capture the power of the Titans and will destroy Eren’s entire homeland to get it. Kruger’s last words to Grisha were to urge him to find a way to end the cycle of violence, but our heroes are a long way from figuring out how.

These last few episodes have been a surprise for more than one reason. As they were coming up, warnings were circulating in anime fandom that the author of the source manga is a right-wing militarist and that the story would be demonstrating that fact by the end of the season. But now, seeing how much of these episodes is spent showing the damage caused by an endless spiral of hate, seeing an ending where enthusiastic militarism is the last thing on anyone’s mind, I’m baffled. Either we actually didn’t reach the terrible material, or something about Grisha’s backstory has been misread.

As it stands, I absolutely can keep recommending this show with only a caveat about the pacing in the first season. Now we wait, as we’ve learned to by now, for one final season currently scheduled for late next year. 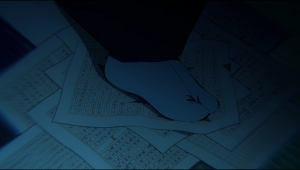 Demon Slayer: Kimetsu no Yaiba #13 – With no backup, Tanjirō just has to pull himself together, adjust his technique, and do his best. But he faces that most horrifying of demons… a failed author. And outside, his two new and annoying comrades are doing their best to make things worse.

The most interesting part of the flashback was the suggestion that the demon was still trying to be a writer even after becoming a demon. Perhaps he thought demonic power was going to give him a boost. Apparently it didn’t work out, and it left him forever sensitive to any further losses of status.

Afterward, the focus turns to trying to desperately give Zenitsu some redeeming qualities. He’s loyal to Tanjirō, he’s a sensitive guy thanks to the way his hearing connects him to all living things, and is that going to be enough? He’s now serving as a counter to the insane bloodlust of the guy with the boar head, so there’s that argument for keeping him around. Or Tanjirō could just ditch both of them, but the opening sequence strongly suggests the author’s mind is already made up and we’re going to be sitting through these guys’ antics for some weeks to come.

We do get a break from them though, since it’s time to put this on the shelf and take a look at the summer premieres. We’ll come back to this and see how it stacks up against the new offerings in a couple weeks.

Is the World Really Overpopulated?

The Doctor is hot. No doubt about that: He may have started out as a cranky old man, a mad scientist, traveling the universe with his granddaughter – but at least since Tom Baker, the potential for Doctor hotness has definitely been on the agenda. The 21st century revival of Doctor Who deliberately went for […]

The Dangers of Crosstime Travel