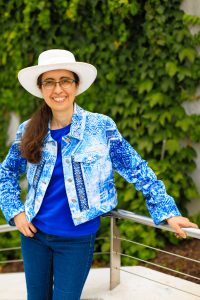 Cindy Koepp combined a love of pedagogy and ecology into a 14-year career as an elementary science specialist. After teaching four-footers – that’s height, not leg count – she pursued a Master’s in Adult Learning with a specialization in Performance Improvement. Her published works include science fiction and fantasy novels, a passel of short stories, and a few educator resources. When she isn’t reading or writing, Cindy is currently working as a tech writer, hat collector, quilter, crafter, and strange joke teller.

Two telepathic people from Haidar are commissioned to help a troubled planet parlay for peace and in so doing find a war of their own.

Koepp certainly walks the tightrope of science fiction and fantasy in this exciting tale!

Not only does Mindstorm have an array of interesting creatures and a galaxy of unique planets that they inhabit, but the elaborate system of telepathy tunnels the reader into a fragile landscape of mind and emotion. An exciting journey into and through deep and interesting fictional characters.

An excellent read, Mindstorm: Parlay at Ologo brings humor in the midst of drama, and passion in the midst of prejudice. I thoroughly enjoyed the story. So much that I wanted to interview the author Cindy Koepp and let her tell us about her book. – D.L. Gardner 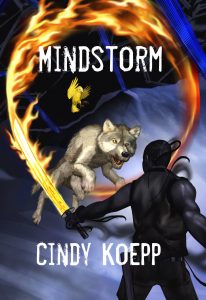 Thomas McCrady, a telepathic negotiator from Haidar Station in Earth orbit, is faced with his biggest challenge yet when he is sent to broker peace with a rookie partner who has no training in the field. Worse, she’s the doctor he blames for the death of his last partner. Calla Geisman’s telepathy skills cannot compete with the majority of Haidarian citizens. At least that is what some people believe. Some people think she’s a waste of space. Some people want her dead. Yet, against any reasonable odds, she is assigned to go with Thomas to Ologo. For both their sakes, she must gain his respect and trust before she can play her part in resolving the conflict on a distant planet, helping to catch the perpetrators, and working to end the prejudice toward her kind at home.

Cindy’s favorite science in the book is proxemics and kinetics. The two alien races that Calla and Thomas deal with have different cultural norms for behavior and speech. With Calla’s lack of experience in arbitration, she knows their physiology but not the proxemics and kinetics she needs to interact with them without causing an intragalactic incident. Thomas has the training in the cultural knowledge but lacks the medical knowledge to figure out the plague gradually wiping out the two races of Ologo. The two of them together can figure it all out but they need to trust each other.

Inspiration?
Mindstorm has a strange, convoluted background. I was writing the draft of Lines of Succession, another totally unrelated novel, which has a number of rapier duels. Those duels were pitiful. Although I’d read a bunch of really well done sword fights, I hadn’t written many. So, I wrote a some fanfic that will never see the light of day because honestly, it was not that fabulous. Mostly it was a series of sword fights strung together by a somewhat wobbly plot set in another universe so I could focus on writing the sword fight rather than on the world building. That did accomplish the purpose. When I went back to the Lines of Succession rewrite, the rapier duels became much more interesting.

The characters I created to add into the fanfic were fun, so I used those characters to continue the series with a pile of short stories and novellas. One of those stories was Drug War. I separated that story from the others and rewrote it to remove all references to the characters and plot points that were not my own. That went through several iterations and expansions and eventually ended up with the current novel. Comparing the original fanfic version of Drug War to the current Mindstorm novel, the connection wouldn’t be so obvious. Characters have changed names and many of the problems and solutions have been tweaked so the story would be better balanced. The backstory behind who the Haidarians are is very different, too, which gives different motivations to many of their actions.

The tale turns largely upon Thomas coming to terms with fears and prejudices even he knows are unreasonable while Calla strives to prove she’s not the waste of space some Haidarians think she is. In the end, her weakness is their greatest strength.

Is the Higgs boson actually a ‘portal to the dark world’? – Futurity

There are some people who think that a movie based on a video game should automatically be considered mindless trash. Good science fiction movies, they say, should be based on loftier sources, such as the sacred texts of Bradbury, Dick, or Heinlein. Or on the holy scrolls handed down from the sanctified Temples of DC […]