Steampunk Romance, Homeworld Security Romance, ice world romance, you know, seems like there’s a lot of romance going on in our galaxzy 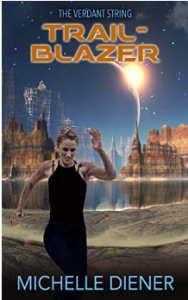 Whether your March came in like a lamb or a lion, I’ve got new science fiction romance reads for you!

One of my favorite SFR authors, Michelle Diener, is out with the third book in her Verdant String series.* This one, Trailblazer, was a fast moving adventure with a bit of a sense of humor and a somewhat different take on the nanites trope. Nanites are the helpful but teeny tiny electromechanical devices floating around in a science fiction hero or heroine’s bloodstream, giving them all kinds of handy powers. The blurb: He’s on a mission . . .

And if they get off-planet alive, she’ll have to trust he won’t reveal her darkest secret.

Tally Riva is not what she seems, and even she’s not happy about it. Infected, invaded, she’s not quite sure how to describe it, but on a disastrous mission to a ghost ship, something burrowed its way into her body. Into her mind.

When her commander decides the best cure for what he thinks is Tally’s trauma is to send her on the famous Veltos Trail, Tally goes without revealing what’s really behind her mental anguish. Anything to be seen as normal again, anything to ignore what she’s afraid is happening to her.

But Veltos isn’t the safe place it seems. The chosen military personnel lucky enough to be offered the chance to walk the Trail are supposed to be the only people on Veltos. But Ben Guthrie, a captain in Arkhoran Special Forces, knows they’re not. He and his team have been on Veltos for a month already, tracking suspicious enemy activity, and he’s gone undercover on the Trail in search of a satellite his superiors are sure has been shot down.

When Ben’s worst fears become reality, and they find themselves hunted by a cunning enemy through the thick forests of Veltos, Tally and Ben fight together to survive. And Tally has to decide if accepting the changes inside her will save them both, or be her doom. 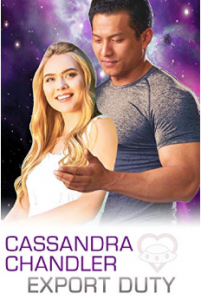 Cassandra Chandler is back with another Department of Homeworld Security novel, the ninth in the series. Export Duty carries on the tradition of fast moving, fun stories set in this world and the plot goes this way: Her next delivery will be out of this world!

Lily’s main priority is to steer her family’s import/export company toward altruistic pursuits. That is, until her Nana starts talking about doing yoga with a little lizard person from outer space. Lily’s new goal is to help her Nana see through her delusions. But then, the alien in question actually shows up in the green-scaled flesh, dragging along a doctor that Lily would love to have examine her.

As field medic for the Coalition soldiers stationed at the Earth base in Florida, Rin is pretty non-essential. His job is to smile and distract people while med-tech takes care of whatever issue they’re having. So why is a Vegan—the creators of that technology—coming to him for help?

Throw in some desperate Antareans wanting to start a trade agreement with Lily, and an attack by dozens of fanged, furred Earth-monsters called “cats”, and Rin’s going to need some of that med-tech for himself. Or maybe he’ll just let Lily tend to his wounds Earth-style… 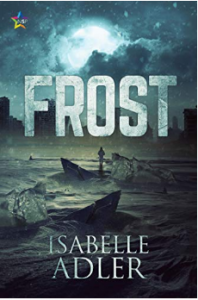 I’m always on board for post-apocalyptic tales and Frost by Isabelle Adler sounds like a good read for a chilly March evening. The blurb: The end of the world as they knew it had come and gone, and the remnants of mankind struggle to survive in a barren landscape. Twenty-three-year-old Finn sets out on a desperate mission to scavenge for the much-needed medicine to help his sister. He knows better than to trust anyone, but when a total stranger saves him from a vicious gang, the unexpected act of kindness rekindles Finn’s lost faith in humanity.

The tentative friendship with his rescuer, Spencer, gradually turns into something more, and for the first time in years, Finn lets himself yearn for joy and hope in the dead of nuclear winter—right until Spencer goes missing.

They say love is the greatest power of all, but it seems it would take nothing short of a miracle to overcome the dangers that threaten to destroy Finn’s only chance for happiness and the lives of his loved ones. 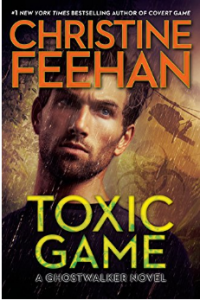 Do you have a long running series where you started out strong on reading every single one, drifted away for a while, came back and now can’t wait to read the newest installment? That would be me and New York Times Best Selling Author Christine Feehan’s Ghostwalkers. The main characters in the series have been given enhanced abilities of all types, against their will, by a megalomaniac billionaire scientist. Her latest is Toxic Game and the plot summary reeled me right in: On a rescue mission in the heart of the Indonesian jungle, Dr. Draden Freeman and his GhostWalker team need to extract the wounded as quickly as possible—or risk spreading a deadly virus unleashed by a terrorist cell. When Draden gets infected, he forces his team to leave him behind. He won’t risk exposing anyone else. He intends to find the ones responsible and go out in a blaze of glory….

Shylah Cosmos’s mission is to track the virus and remain unseen. Her enhanced senses tell her that the gorgeous man eradicating the terrorists one by one is a GhostWalker—and his lethal precision takes her breath away. When he’s hit by a lucky shot, she can’t stop herself from stepping in, not knowing that by saving his life she’s exposed herself to the virus.

There’s no telling how much time Draden and Shylah have left. Racing to find a cure, they quickly realize that they’ve found their perfect partner just in time to lose everything. But even as the virus threatens to consume their bodies, they’ve never felt more alive. 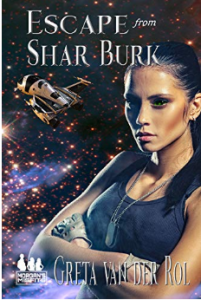 Greta van der Rol is well known in SFR circles and has just released a new title, Escape from Shar Burk. The blurb: When Chet, Toreni, and Jirra rescue Marisa, mistress of Shar Burk’s brutal governor Soldar, from certain death they think they’re just helping a fellow woman to a new life. But what did Marisa do to earn a death sentence? Is it just a couple of dictators flexing their muscles? Or something much more dangerous? They set off to follow a tenuous trail where Marisa discovers there’s a whole new world off Shar Burk space station and men much nicer than Soldar.

But by taking in Marisa, the team has been noticed by Soldar. Helped by a traitor in Fleet Intelligence, he’s on their trail before they discover his plans. And he wants them all dead. 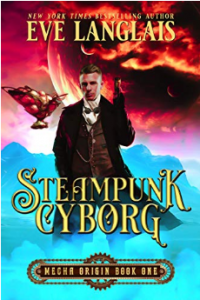 Been missing cyborg romance? Need some steampunk? New York Times and USA Today Best Selling author Eve Langlais covers both bases with her latest release, Steampunk Cyborg (Mecha Origin Book 1). The plot: When a friend drags Agatha “Aggie” Bowles to a romance convention, all she wants to do is find some new authors and a quiet spot to read. Instead of relaxing with a book, she ends up kidnapped by a steampunk cyborg.

Which is as exciting as it sounds.

Except for the fact he’s more interested in the cog hanging around her neck than Aggie herself. He’ll do anything to get his hands on it. Problem is other people want it, too.

Can this cyborg relinquish a priceless treasure for love? 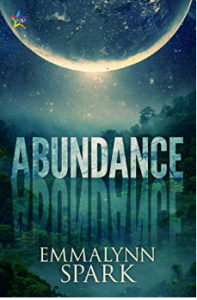 Is help coming, asks the two survivors of catastrophe in Abundance by Emmalynn Spark. The blurb: Alex is part of Earth’s last hope: a crew member on a ship sent out from a dying planet, wishing for a second chance. He wakes from his cryo pod to find destruction. Their mission has failed, he and his commander, Luke Belka, are the only ones to survive the journey.

Luke insists that help must be coming, that one of the other ships on the mission must also have reached this planet. Whether or not he’s right, they will need to survive on this lush alien planet. And maybe find happiness along the way. 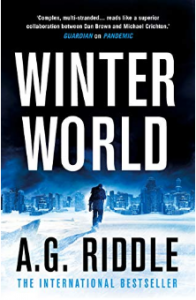 I’ll finish with Winter World (The Long Winter Book 1) by A. G. Riddle, which is actually science fiction with romantic elements. I found the book intriguing and well done, and am now eagerly awaiting the sequel. The plot: Each month, Earth grows colder. Snow falls in summer. Glaciers trample cities across North America, Europe, and Asia. The new ice age shows no signs of ending.

Chaos erupts. Around the world, people abandon their homes, fleeing the cold, flocking to regions where they can survive.

Nations prepare to go to war for the world’s last habitable zones.

NASA and other scientific organizations race to discover why the world is cooling. They send probes into the solar system to collect readings, and out there, in the dark expanse of space, they find something no one expected: a mysterious object, drifting toward the sun. Could it be responsible for the new ice age? And if so, can we stop it? Or is the artifact merely an observer? Or neither? Could it be a relic from a long-extinct civilization? One thing is certain: investigating the object is humanity’s best hope of survival.

As the ice age claims more lives and the world slides into anarchy, an international consortium launches a mission into space to study the object and make contact. But the first contact mission doesn’t go as planned. What the crew discovers out there is beyond anyone’s imagination.

Two members of the first contact mission may hold the keys to humanity’s salvation.

Dr. Emma Matthews is the commander aboard the International Space Station. For months, she has watched the world below freeze and civilization unravel. The headlines tell only half of the story. The messages from her sister tell the rest, of a world witnessing mass migrations, fighting for survival, struggling to provide a future for their children. When a catastrophe strikes the ISS, Emma faces her own fight for survival.

Dr. James Sinclair is one of the greatest scientists alive. A mind before his time. Years ago, he invented something with the potential to change the world–an invention that would upset the balance of power in the world forever. Fearing that change, his enemies sent him to prison for a crime he didn’t commit. But with humanity’s future at stake, NASA asks him to join the first contact mission. His expertise is vital to the mission’s success–and to saving Emma. With the clock ticking down to humanity’s final days on Earth, James makes a decision that will change his life forever and may determine the fate of the entire human race.

Happy reading – see you in  two weeks with more books!

*Although normally I purchase any books I choose to read, I did receive an ARC of Trailblazer.

NASA Could Go to the Moon Next Year. Could SpaceX Help? – The Atlantic