The bigoted backlash against Brie Larson and female-led superhero films may very well have back-fired. 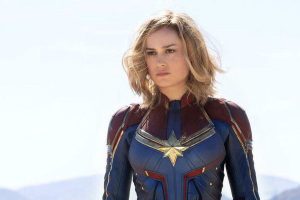 Toxic fandom has been  at it again.

Ahead of the release of Captain Marvel, the film review aggregator Rotten Tomatoes has noticed what it calls an “uptick in nonconstructive input”.  In plain English, their website has been hijacked by jerks.

A number of users were upset that the star of Captain Marvel, Brie Larson, was keen to be interviewed by a more diverse range of journalists than was usually the case. She wasn’t against talking to a lot of white guys about her movie; she just wanted some more variety in the mix.

When a star ventures that kind of opinion, she is guaranteed to be targeted by some angry ignoramuses proclaiming: “You’re racist against whites” and “You’re sexist against men”.

It’s tempting, of course, to think that even if the star had not said a word about diversity, the film would have run into the same problem, because perhaps what people were really angry about was a film with a woman as the superhero.

With haters besieging the website and causing the movie’s “Want to See” score to plummet, Rotten Tomatoes took action. It decided it would no longer allow people to comment on a film before its release, and it downgraded the Want to See feature.

In some ways, the toxic fans have spoiled the fun for everyone again. They put Rotten Tomatoes in a position where it felt it had to change its product to protect the integrity of its site. (At the same time, of course, it protected Disney’s vast investment in Captain Marvel and the rest of the Marvel Cinematic Universe.)

Like the online abuse of Last Jedi actor Kelly Marie Tran, it has been a depressing episode.  But maybe the trolls accidentally did us a tiny favour.

After all, Rotten Tomatoes’ action amounts to enforcing a quaint old convention that seems to get forgotten sometimes:  If you’re tempted to pronounce upon a film, you should probably see it first.

The people hating this movie in advance are the inevitable mirror image of the people who love movies in advance. And the whole film business is based on getting people to feel strongly about the product before they see it. That’s particularly the case with SF and fantasy movies, because they tend to be so much more expensive to make.

Film magazines (the ones that still exist) devote large amounts of space to previewing the “must see” movies of the summer or the year. YouTube contains endless videos speculating about the content of franchise entries no one has seen yet. If you book film tickets online, the website may ask you to indicate how excited you are about the film.

The film business has always been about generating advance buzz around a movie, of course. But in the past couple of decades, things have surely got out of hand.  When a film comes out, it’s judged by how much money it makes during its opening weekend.  When you measure a film by that yardstick, you’re really just rating the effectiveness of the marketing.  If you waited until the second weekend, when word had spread about whether the movie was any good, things might be different.

With less time spent obsessing about “must see” releases, it might be easier to find out about films that don’t attract the same hype but are well worth seeking out.

If the toxic fans have inadvertently nudged us in that direction, a tiny amount of good might have come out of the Captain Marvel episode.

The time to judge a film is when you’ve seen it. When that time comes, the haters can hate all they like.

How Did We Miss This? An Upper Atmospheric Discovery Named STEVE

Join Sasquan and VOTE for the Hugo Awards!