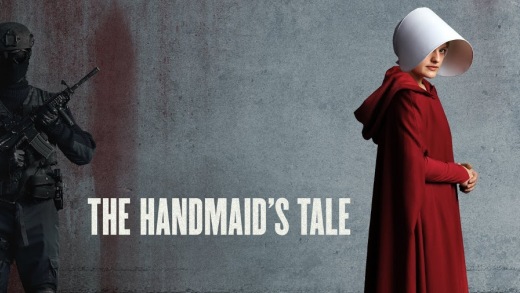 The TV series based on the 1985 Margaret Attwood novel of the same name is bound to divide opinion. It is set in a dystopian near future New England, where a totalitarian state resembling a theonomy has overthrown the United States government.

The novel focuses on the journey of the handmaid Offred.

Her name derives from the possessive form “of Fred”; (the name of her assigned commander – Fred Waterford) because handmaids are forbidden to use their birth names and must echo the male, or master, whom they serve.

I was – and always have been – an avid science fiction fan. However, I must admit, the subject matter of the novel never appealed to me in my younger days. And when the TV series came out, I didn’t profess much interest. So what changed? I’ll tell you: my wife, Annette!

During the winter months on the island when our daily routine is a little bit quieter, we have a tradition of sitting down together to devour a series or two. I inflict my tastes on her, (poor thing), and in return, I agree to watch a series she chooses.

When she chose The Handmaid’s Tale, I was of a “well, at least it’s not another period drama” opinion.

In the TV series, you see a world that is suffering. Fertility rates among humans have dropped dramatically due to sexually transmitted disease and environmental pollution. Events are set in motion that lead to a second American civil war, resulting in the emergence of “Gilead”, a totalitarian theonomic government hungry for power and influence. Gilead’s society is hierarchical, aggressive and wholly militarized. Under the umbrella of resetting a proper balance, they force a new regime upon its citizens, but do so insidiously to begin with, so that the noose is ready to tighten the moment the masses wake up and realize they are now slaves.

In a nutshell, only men retain any degree of autonomy, albeit heavily controlled by the state. And women? They lose all their rights as individuals. For example, they are not allowed to read or write; work in their selected vocation; hold their own bank accounts; drive a car, etc, etc. If they held positions like doctors, scientists, or police officers before the rise of Gilead, well, they can kiss that life goodbye.

Basically, they become nothing more than property divided into various social classes: Wives – (the infertile spouse of a commander) is the highest status a woman can have, and they are expected to run households under the strict guidance of their husbands; Marthas are infertile housekeepers and cooks; Aunts (also infertile – you get the gist?) train and oversee the handmaidens; Econowives are lower-class fertile women who have a slightly greater degree of freedom than the Marthas and Aunts.

In the series, they live under constant fear and are totally subservient to all the rules and regulations. And well they should be. At the drop of a hat, they can be forced into servitude as a handmaiden, and their spouses disposed of. And any children they have are farmed out to “families” of commanders or other men of approved status.

You’re starting to see how things are now, eh?

If anyone breaks the law? Men are executed, or, if powerful and influential enough, expected to submit to the biblical precept of “an eye for an eye”. In a woman’s case, if they aren’t executed outright, they’re sent to the colonies, where they’re worked to death clearing toxic waste.
(And in a subversively deviant twist, if that woman is good-looking enough or has earned favor, she might be sent to one of many underground brothels as a Jezebel, where many a commander ventures to ease the stress of their high-pressured lives.) Poor things.

So much for a theonomy eh?

Now we come to the handmaids.

Distinguished by their red robes, the handmaids are supposedly afforded a place of great honor in Gilead, as they’re the only women who are fertile. Yeah right! (Strange how the econowives are overlooked?)

Basically, all they are there for is to produce children to repopulate Gilead.

And how – pray tell – is this wonderful scheme applied? I’ll tell you. They are raped on a regular basis by their male masters, who, if they are married, must ensure their wives take part!

(You probably appreciate now why the book didn’t appeal to me as a young man.)

Even more infuriating, they try to ritualize the whole sordid affair and give it a veneer of respectability and sanctity by making out the abuse is a solemn and sacred duty for all those involved.

Having grasped the basic concept of the way things are, we come to the actual series.

The story follows the life of June Osborne (Elizabeth Moss) who, before the world turns upside down, lives a happy life with her husband and child. In a series of flashback, we see the events that led to the rise of Gilead: Behind the scenes maneuvering to get the “right” men into positions of power; the growing unrest; the rioting; the implementation of martial law; the final act of terrorism that eradicates the government.

Even then, Gilead doesn’t go in all guns blazing. They know if they do, there’ll be a mass stampede for the borders, so they swiftly cut off all avenues of escape in very quick order. The result? The aforementioned noose!

Unfortunately for June, neither she nor her husband pay attention to how serious things are getting and they leave it far too late to try and flee the former United States to Canada. They are caught, her husband is shot, her child is taken into care (for adoption to a commander’s family of course) and when it’s discovered she is fertile . . . THAT’s when her nightmare really begins.

She undergoes a brutal form of conditioning in an attempt to make her become subservient and compliant enough “to serve” her state.
Those who refuse are tortured. The Aunts sent to train handmaids will literally cut out the tongues of dissenters; gouge out an eye – or two if they’re especially defiant – of a rebel; hack off a hand or a foot of those who fight back or try to run. After all, a handmaid doesn’t need such impediments to bear a child, does she?

Such indoctrination emphasizes the fact that the handmaid is now property. The final insult? She no longer qualifies to be known by her given name. What she did before doesn’t matter. Her qualifications are irrelevant. In June’s case, she becomes Offred, signifying she is the bound slave of her assigned commander (Fred Waterford) and his wife Serena Joy. If she steps out of line or says the wrong thing, she can expect to be beaten, tortured . . . or worse.

And it really does get worse for those who retain the spark of independence.

As you watch this series, you really feel for June’s plight, and that of a society so easily manipulated into giving up their rights to a bunch of egotistical, power-hungry autocrats whose only agenda is to look out for themselves. Nowhere is this displayed more poignantly, than when a handmaid gives birth:

Picture the scene, very briefly: The poor handmaid is taken upstairs to a room and “prepared” for birth. It doesn’t matter if she was an experienced mother before Gilead rose to power. What went before doesn’t exist. Now, the expectant mother has to submit to the indignity of a room filled with all the other handmaids from her sector – and a fair few Aunts – all chanting things at her, like, “breathe, breathe, breathe. Pant, pant, pant.”

Seriously! Psychological interrogation at its best.

Instead of undergoing what should be one of the most amazing – if painfully intense – experiences of her life, the poor expectant mother isn’t given a moment’s rest.

Meanwhile, downstairs, the assigned commander’s wife – who has been wearing a false “pregnant tummy” to emphasize her husband’s handmaid is expecting, will be cosseted in an atmosphere of blissful serenity. Her friends will be cooing and aahing, and patting her forehead with cool flannels, helping her to “share” the experience of birth.

(I won’t explain it fully here, you’ll see for yourself if you catch the series – but the baby shower is to die for).

To sum this series up succinctly . . .

The Handmaid’s Tale is shocking, repulsive, heartrending, and alarming. And so thoroughly hypnotic, you can’t help but get sucked into the mire that is June/Offred’s life. I can honestly say, I’ve never wanted to reach into a screen and throttle the *******s on the other side so much as when I was watching this.

My dear wife who suggested we watch this together needed to apply ice-packs to my brow on a regular basis to cool me down. And a gag. I do admit, I cussed . . . a lot!

Powerful stuff. And kudos to the team who dared to make it . . . it’s compulsive watching.

Review of the new show, Salem. Be on the lookout for familiar faces!