A round up of the latest and greatest! Check out those abs! 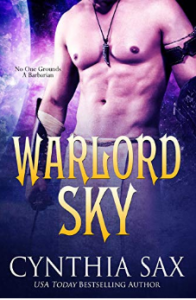 Welcome to the next installment of new science fiction romance releases, ready to fill your e-readers!

USA Today Best Selling author Cynthia Sax has spun a new series off from her Dark Refuge books and the first title, Warlord Sky (Chamele Barbarian Warlords Book 1), has been released. I enjoy her dark, gritty, steamy writing so this one is definitely on my To Be Read list. The blurb: No one grounds a barbarian warrior.

Qulpa, a Chamele warrior, lost everyone he loved in the brutal Succession Wars. Flying is the only thing that brings him joy. Serving as his team’s pilot is the sole duty he has left. Then a horrific crash leaves him injured and unable to fly.

The one being who can help him is also his gerel, the female destined to be his. She insists she doesn’t feel their connection. Qulpa is certain his beautiful mate is lying and nothing will stop him from finding out why.

Nayan knows the injured barbarian is her warrior, her one chance at a forever bond. His dominance makes her feel safe. His gentle touch inflames her passion. His kisses scorch her very soul. The tall muscular male tempts her as no one else has.

But she has a deadly secret. If it’s exposed, her injured male will lose more than his ability to fly. Both of them will die. She can’t take that risk, not for him, not for them, not for a lifespan filled with love. 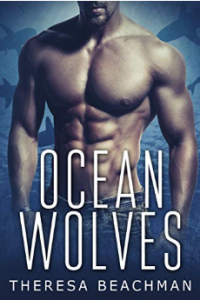 I used to love the deep sea SF adventure movies back in the day, like ‘The Abyss’ and ‘Deepstar 6’, a genre which author Theresa Beachman says were part of her inspiration for Ocean Wolves, so of course I one clicked the book the day it was released. The plot: A second chance at love in the ocean depths.

A world-changing discovery at the bottom of the North Atlantic Ocean turns a routine mission deadly for Becca and her scientific team. Her only chance of survival will involve trusting a squad of black-ops mercenaries led by the one man she swore to forget.

Dr. Becca Johnson has devoted herself to her work after personal tragedy taught her she’s better off alone. She finds solace in the isolation of oceanic research but as her six-month work rotation draws to a close, events rapidly escalate into life-threatening chaos. Struggling to hold her team together, she is forced to accept the help of the Ocean Wolves.

Ethan Carter joined the Ocean Wolves after his troubled history ended his career in the elite Special Boat Services. Now, he’s a hired gun with the Wolves, paid to protect the interests of the world’s biggest oceanic multi-national, Triton Core. When his team is tasked to escort crucial research to the surface, he discovers events spiraling out of control and the woman from his past he’s tried desperately to forget—the woman who reignites emotions buried deep in his heart.

Fighting increasing danger that threatens the lives of everyone in the deep-sea habitat, Ethan vows to protect Becca at all costs.

But as their options dwindle, leaving them trapped almost 8000 feet below the surface, will it be enough to keep her alive? 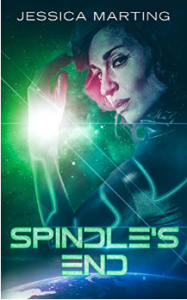 Spindle’s End from Jessica Marting has an intriguing plot and I really enjoyed  Haven, her first venture into SFR, so I’m looking forward to reading this one. The story: The last memory Anissa Alto has is watching the destruction of the research ship Spindle by a rival scientist and being unable to do anything about it. The next thing she knows, she’s waking up in an unfamiliar sickbay one hundred years later, surrounded by a crew of xeno-archaeologists led by Dr. Benedict Sawyer.

Sawyer’s plan was simple: dig up the artifact resting in the bottom of a pit on an uninhabited planet, become an academic superstar, and never teach undergraduates again. The artifact turning out to be a woman from a neighboring star system put into stasis throws his dreams of student-free research off-kilter, as does Anissa herself.

Anissa knows who destroyed the Spindle and why, and that the perpetrator is still out there a century later. But as she and Sawyer investigate, it becomes clear that the reason for the ship’s destruction is more than a case of scientific rivalry taken to the extreme and something far more sinister. 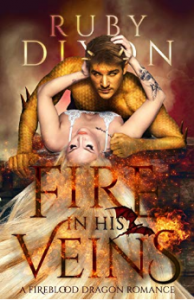 Ruby Dixon is back with more dragon shifters and the title is Fire in His Veins: A Post-Apocalyptic Dragon Romance (Fireblood Dragons Book 6). Her pithy plot description:  I’ve wanted Andrea since the moment I saw her.

But she’s human. I’m drakoni. The only way I’ll stay sane and not lose myself to the madness that’s swept over my people is if I keep my mental walls strong. I have to give up everything that makes me a dragon. That means no telepathy, no fire breathing, and no battle form.

I certainly can’t take a mate. Andrea can’t be mine.

When her brother escapes the fort, though, she needs help tracking him down. That means I’ll be alone with her, breathing in her sweet scent, and it may be too much for my control.

What happens if I give in to my dragon? Will I take her as my mate…or tear her throat out? 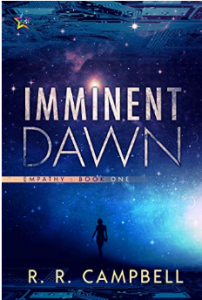 Imminent Dawn from R. R. Campbell  has the whole secret lab, brain implant, true love, evil corporation vibe happening and sounds highly intriguing. The blurb: Art-school dropout Chandra would do anything to apologize for her role in her wife’s coma—including enroll in the first round of human trials for an internet-access brain implant.

At first, the secretive research compound is paradise, the perfect place to distract Chandra from her grief. But as she soon learns, the facility is more prison than resort, with its doctors, support staff, and her fellow patients all bent on hatching plots of their own, no matter how invested they might seem in helping her communicate with her wife.

Making matters worse, a dark wave of uncertainty crashes down on the compound, forcing Chandra to become an unlikely but pivotal player in conspiracies stretching from the highest levels of the North American Union government to the lowest dredges of its shadowy hacking collectives.

To save herself and her wife, Chandra and her newfound friends from the study will have to overcome the scheming of a ruthless tech magnate, the naïveté of an advancement-hungry administrative assistant, and the relentless pursuits of an investigative journalist, all of whom are determined to outpace the others in their own quests to resurrect lost love, cover their tracks, and uncover the truth. 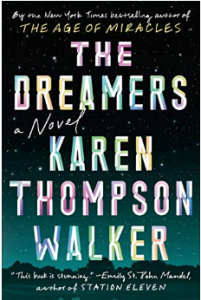 Moving to something really different, here’s what I had to say about The Dreamers by New York Times Best Selling Author Karen Thompson Walker in a post on my personal blog: “It’s NOT a romance but was a book of note. I enjoyed it quite a bit but to describe it I’d have to say it reminded me very much of a lengthy ‘Twilight Zone’ episode – inexplicable things happen, it’s vaguely apocalyptic, some answers are hinted at, and then the episode ends (or the book in this case) and you’re left thinking about it for a while. I liked it but it was different…” Different being a good thing!

The blurb: One night in an isolated college town in the hills of Southern California, a first-year student stumbles into her dorm room, falls asleep—and doesn’t wake up. She sleeps through the morning, into the evening. Her roommate, Mei, cannot rouse her. Neither can the paramedics, nor the perplexed doctors at the hospital. When a second girl falls asleep, and then a third, Mei finds herself thrust together with an eccentric classmate as panic takes hold of the college and spreads to the town. A young couple tries to protect their newborn baby as the once-quiet streets descend into chaos. Two sisters turn to each other for comfort as their survivalist father prepares for disaster.

Those affected by the illness, doctors discover, are displaying unusual levels of brain activity, higher than has ever been recorded before. They are dreaming heightened dreams—but of what? 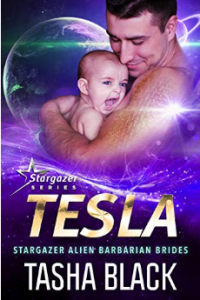 Finishing with Tesla: Stargazer Alien Barbarian Brides 2 by USA Today Best Selling Author Tasha Black. I very much enjoyed Tolstoy, the first book in the new series so this new title is on my TBR List. The plot: A space-pirate-in-training, a shape-shifting barbarian with an ancient secret, and a baby boy who just might be the clone of Nikola Tesla…

Raina yearns for a chance to discover new things in the galaxy, just like the famous explorers she read about as a child back on Earth. But Leif Erikkson and Magellan didn’t have to deal with the pressure of a tough-as-nails pirate captain demanding results, or the distraction of a hot-as-hell alien shadowing her every move. Raina spends her days dreaming of exploring new worlds, and her nights resisting the temptation to explore her budding desires.

Nick has just awoken from stasis to find himself alone on the luxury cruiser he was hired to defend. He’s looking for answers, but finds something he never expected – his blood mate. Raina is brave and beautiful, and Nick burns for her from the moment he sees her. But it’s hard to trust a human, especially when she is only onboard to steal things.

When a hostile creature attacks, the two must team up to get themselves to safety, and their growing attraction reaches the boiling point.

And then they discover a baby whose DNA could change the new world.

Can a baby in a stasis pod rein in Raina’s wanderlust, and give Nick the impetus to trust her? Or are they all going down with the ship?

Next post I’ll be talking about the titles selected by the book bloggers and reviewers who serve as judges for the 2019 SFR Galaxy Awards!